Skip to content
Facebook Twitter Instagram
Search
Close
“For what you have done I will always praise you in the presence of your faithful people.
And I will hope in your name,
for your name is good.“
Psalm 52:9
**I actually first told today’s
Memorial Box Monday story on February 3, 2009.
We were living in the hotel after just losing our home to the fire.
I will share it again, each year, right around the anniversary!!**
Earlier today, when writing about the Memorial Box giveaway, I mentioned how God told the people to tell the story over and over and over and over and over….and this is one of the stories I will tell over and over here because so many people doubt that miracles are for today.  So many wonder if healing is possible?
Well read on, sweet friends….read on…
It is a miraculous story of God’s powerful healing touch!
If, per chance, you read it in the past –
please rejoice with us again!
February 3, 2009 (from the hotel):
I have to start off by telling everyone that I was actually going to type this January 14, 2009 {the morning of the fire}.  Weird to think I was going to tell this story of God’s miraculous power but instead I stood and watched our little log home burn.
This story goes back to January 10, 2006.
If you are new to our Place Called Simplicity
and are wondering what in the world
a Memorial Box is,  please read about it here.
As many of you may or may not know, I have Multiple Sclerosis.
It showed up when I was in my late 20’s and
then I was officially diagnosed in 1991.
I grew up in Buffalo, NY and Buffalo is known as a
‘hot spot’ for MS.
My cousin has it, friends of mine from
high school have it, a girl Dw dated for ages
while in college has it and one of Dw’s
cousins even died of it.   In fact, my sister-in-law,
Mary, had three sister-in-laws {one has since passed away from it} and she even a sister with it!

My MS started out slowly, but after about 10 years it got much more aggressive and soon I was having exacerbation after exacerbation on a regular basis.
Before long I needed a cane to walk with for support.
With my cane for balance and support on my right side, often family or close friends would allow me to use their arm for support on my left side.   Walking was often a struggle.

I also had exacerbations that affected my hearing, my speech {slurring for weeks like I was drunk}, my vision, my balance {I would fall into walls regularly} and so on.

{My cane looked like this one [except the flowers were purple – my personal favorite!]….beautiful and flowery……I figured if I had to use one it was gonna’ be feminine, flowery and spiffy!!} 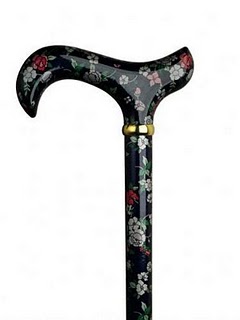 Then in about 2001, I had a major exacerbation that left my right arm and right hand trembling and shaking 24/7 – permanently! It was embarassing. It shook boldly all the time. From the moment that exacerbation started there was a never, ever, ever, ever even a moments break from the trembling, twitching and shaking. I could not lay on my right side because my body would vibrate so much that I couldn’t sleep.
I love to write long hand letters to special people in my life but I did not like to write anymore because of how
awful my handwriting looked.
It was humbling to be in a prayer circle and hold hands with someone who didn’t know me because of how my hand and arm continually bounced and trembled.  I would accidentally knock things over without much effort.   So from 2001 there was not a moments reprieve from the trembling, twitching and shaking of my right arm/hand.
And the MS continued to daily make my body a mess. We finally had to build a handicapped accessible home for my wheelchair. I affectionately named him Charlie, as I would have to, from time to time, spend a day or two in him.
In June of 2004 we moved to Colorado to pastor. We had been told by doctors that it would slow the progression of an autoimmune disorder like MS to live in a drier climate.
THEN one day, January 10, 2006 to be exact, Dw and I were on a four way call with treasured friends of ours {Dan and LaVonne} who live in San Antonio, TX. We had wanted to pray with them about a prophetic word that the husband, Dan, had had about me. It’s a long story, maybe for another day (but probably not), just suffice it to say that what we were praying about had nothing {directly} to do with the MS.
It was a monumental time of prayer,
but we didn’t really  understand the extent of just how monumental it was about to be.
Dw and I were tucked away in our master bedroom as we talked with Dan and LaVonne and then prayed together. I prayed, Dw prayed and then our friend Dan prayed. We were asking the Lord to move in the supernatural in a huge way about something
from 40+ years before.
When we finished praying we hung up
and I walked out to the kitchen.
As I was walking over toward the island
where Graham was sitting I felt
like the Lord said, “Look down at your arm/hand.”
I looked and there stood my right hand and arm,
that had only seconds before shook
uncontrollably for the last 5 years,
now completely and perfectly still. I started to
squeal and turned to Graham, “LOOK GRAY! LOOK!”
He looked down to find both hands of mine positioned
next to each other and both were absolutely and perfectly still.
Graham started gasping and screaming along with me and everyone came running….yes, my hand and arm that had trembled and shook for FIVE years was now motionless!!!!
We called our grown kids and friends around the country – it was a true miracle!! Everyone who knew me was in shock!! I felt like the man with the withered hand that is mentioned in scripture. For months, many, many, many times a day I would stop and just stare at my hand/arm. I can’t imagine that man with the withered hand did any different – stopping and staring and remembering and rejoicing!
The following Sunday when we told our church during both services people stood and cheered. God had moved in a mighty way – and we hadn’t even been praying for the MS to be healed!!
What I firmly believe is that when Dan, Lavonne, Dw and I asked God to move in the supernatural He indeed moved. I felt like He said, “I am doing what you asked in the supernatural and I am going to evidence it in the physical by healing your arm/hand.”
From then on I would stand many times a day and just stare at my two hands. That right hand was just as still as my left now – after all those years. It was a true healing miracle.
When I showed my neurologist my right hand and arm – he literally jumped up and hugged me and with utter delight said, “Linn, it must be God – Multiple Sclerosis does NOT go away! I bet God is going to completely heal you.” These words from a man who has said he does NOT believe in God!!
And then a few months later……..even though I had used my cane for many years, after the instant healing of my hand/arm I began to notice that my legs began to feel stronger. They were actually feeling really strong!! I was wondering what was going on. Could the words of my neurologist been prophetic?
Within four months even people at church began commenting that it looked like I hardly needed my cane. By mid-July of 2006, I felt like I should take the courageous plunge and try a day without my cane. The rest is history and I have never, ever used my cane again.
I call my arm/hand healing
“my microwave healing” 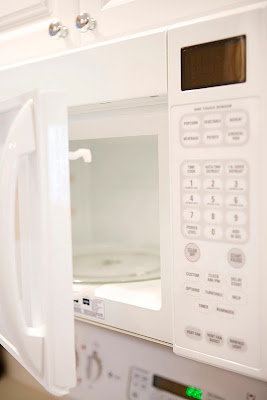 done in an instant!!