Skip to content
Facebook Twitter Instagram
Search
Close
For quite a long time our family has been praying and following an
important homeschooling case.
A German family had sought asylum in the United States because of the persecution they had faced in their homeland.  The question was – Would the US allow this family to stay in the US based on the persecution of their government?
This family had fled to the US in 2008 and their case had moved slowly along in the courts where it was eventually heard before the Sixth Circuit.
The Sixth Circuit eventually ruled that the Romeikes could not stay in the United States.  Everyone watching the case was stunned. However Home School Legal Defense Association then sought 100,000 signatures on a petition making it necessary for the White House to respond.
Through the overwhelming 100,000 signature petition the case eventually ended up before the Supreme Court, asking the judges to review the case in an effort to see if they would hear it and praying that they might set a precedence for those seeking safety from the tyranny of foreign governments.
Many, many, many have been fasting and praying for this sweet family. 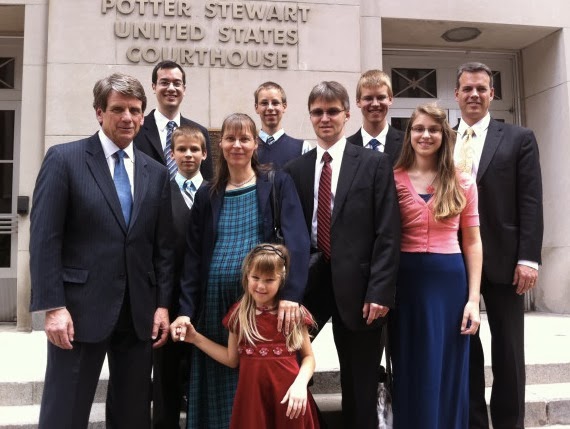 And here’s what a snippet of what was reported
on HSLDA’s site today:
Read it in full here.
Yesterday, the Supreme Court issued a denial of the Romeike family’s petition for certiorari, sparking an immediate and unprecedented reaction.

Although many were not surprised by the Supreme Court’s decision, it seemed that this was the last hope for the family to avoid being sent back to Germany where they would undoubtedly be persecuted for homeschooling their children.

Today, a Supervisor with the Department of Homeland Security called a member of our legal team to inform us that the Romeike family has been granted “indefinite deferred status”.

This means that the Romeikes can stay in the United States permanently (unless they are convicted of a crime, etc.)
This is an incredible victory that can only be credited to our Almighty God.

We believe that the public outcry made this possible while God delivered the victory.

This is an amazing turnaround in 24 hours. Praise the Lord.

Proverbs 21: 1 “The king’s heart is like a stream of water directed by the Lord, He guides it wherever He pleases.”

When the Supreme Court declined to hear the case, the HSLDA said the “last judicial hope for the family” had been exhausted.
The 24-hour turnaround by the U.S. legal system was highly unexpected.
*************
Did you catch that sweet friends?
Yesterday the Romeikes were told they couldn’t stay.
All hope appeared to be gone.
Nothing was expected to change.
BUT Almighty GOD was working the nightshift…
Even when every single person said it was over…
our powerful God was saying,
“OH REALLY?”
Whether a rooster needing to stay in it’s home or an enormous situation going on with a family fleeing the tyranny of their government – God is working on behalf of those whose hearts are set on obeying Him.
When I read the news this afternoon tears spilled from my eyes.  The kids thought something was wrong.  I could hardly see to read aloud the words from HSLDA…faithful, faithful, faithful God.
Yesterday the Romeikes were told they couldn’t stay.
Today,
{less than 24 hours later}
to the shock of all involved,
God said otherwise.
Rejoice with me.

9 thoughts on “Tears of Joy – God Delivered the Victory”