It was probably about March of 2008, just months after bringing Isaiah home, that we caught a glimpse of her precious face. That was it – we were undone and our world would never be the same again.

Reading through her file we found enough information that we knew she would likely be our first “lifer” – meaning we would get to keep her for the rest of our lives.   We had always talked that we never wanted to be empty nesters (and guessed that Uncle Mark would one day live with us too) because there were far too many broken treasures who needed a forever family.  Upon that first glimpse her face called to us and we knew she was ours!

Prior to that first glimpse of her picture I had thought another little boy would be next but Isaiah kept saying over and over, “mei-mei” (little sister in Chinese).  I tried to talk him into a brother from China, showing him pictures of adorable little guys but over and over he would shake his head side-to-side and say in his just-learning-English-voice, “No.  Mei-mei.”  He said it so adamantly that I began to wonder if the Lord was actually speaking through Isaiah’s dogged determination.   So around that time, when we found her picture and I showed him, it was no surprise that he smiled with contentment and nodded his head emphatically in agreement.  We had found his “mei-mei” (who is actually two years older than him).

It would take literally 20 months from that first glimpse to bring his little mei-mei home because about nine months into the process we lost our home to a devastating fire.  As the last of the 15 fire trucks and emergency vehicles (all our heroes) had pulled away I went to a neighbor/friend’s home across the road where I had hastily dropped all the kids off when we fled our burning home.

As I walked up to her front door I was still wearing my bathrobe and I remember thinking how surreal it all was.  It was the middle of the day, I was still in my bathrobe (unheard of) and I couldn’t even put clothes on because they were all gone.  The reality was too painful to laugh about but I remember like it was yesterday thinking, “What in the world am I going to do? I can’t even go buy clothes – I will be shopping in my bathrobe!”  Everything in our lives had just been turned upside down and there was not one familiar thing left.  Even going to buy underwear, socks, clothes, toothbrushes for our big pile would be a gargantuan task.

We had just brought Elijah (1-1/2) and Elizabeth (2) home and my mind was also reeling as I wondered how they would manage to bond with all the trauma of their past and now the brief 3-1/2 weeks of stability in their forever family had given way to a tumultuous nightmare of everything familiar being gone in a few hours.  I was probably in shock as well.

After loving on the kids, I went in to use my friend’s bathroom.  Literally at that moment, as I closed the bathroom door behind me, my cell phone rang.  On the other end of the line was the cheery voice of a friend who worked at our adoption agency calling to inform me that we had just received permission to come to China to get Jubilee.  I remember being dumbfounded.  Now? Like seriously, right now?

I admitted through tears that we literally had just lost our home and all our paperwork, everything to a fire.  She was stunned.  Honestly I look back on that time and wonder how we did it – it was truly a nightmare.

Public Service Announcement – If anyone around you loses their home to a fire – give them oodles and oodles of grace and help them over and over and over!  Do not say, “Call me if you need anything.”  They won’t even remember you said it!  Instead put yourself in their shoes and go get some of the things they need.  Trust me, you will be their favorite person forever.

It took a long time to find a hotel for our large family and as it turns out we had to be in two separate rooms down the hall and around the corner from each other. Many will remember that our Graham had to have emergency surgery the day after the fire and the following day we learned our sweet dog, Lucy, had died.  It took much longer than we’d dreamed to find a rental because (1) there were no landlords lining up wanting to rent to a large family and (2) we had to have four bedrooms as we didn’t want to jeopardize Jubilee’s adoption in any way.  So we searched and searched.

We then found that we had to redo Jubilee’s adoption paperwork because we wouldn’t be bringing her home to our little log home address.  It took months to redo it all while still reeling and regrouping from the fire.  We finally resubmitted but to our shock, we found that the redone paperwork had accidentally been submitted by the agency itself with the log home address not the rental address and we would have to do it all again.  Like if anyone was looking for a time to say, “I GIVE UP!” that would have been it.

Then we found that my fingerprints for immigration were not able to be read sufficiently and we were supposed to go to Albuquerque, New Mexico again to be re-fingerprinted.  We did do that and then they wrote and said that those prints didn’t work either.  Seriously, the obstacles to bringing her home were relentless.  Again, if we were quitters we would have given up.

And while reeling, waiting and working hard we kept praying and wondering how she was surviving and knowing her special needs, wondering, too, if she was being mistreated.   In the midst of the wait, we received this lonely picture of her…it was killin’ us. 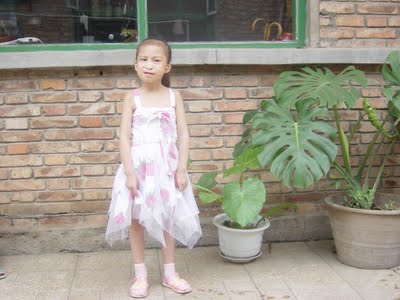 All of that hoopla took a full 11 months and then finally we had permission to come to China again… Emma and I left expectantly for the two-week required trip to bring her home. 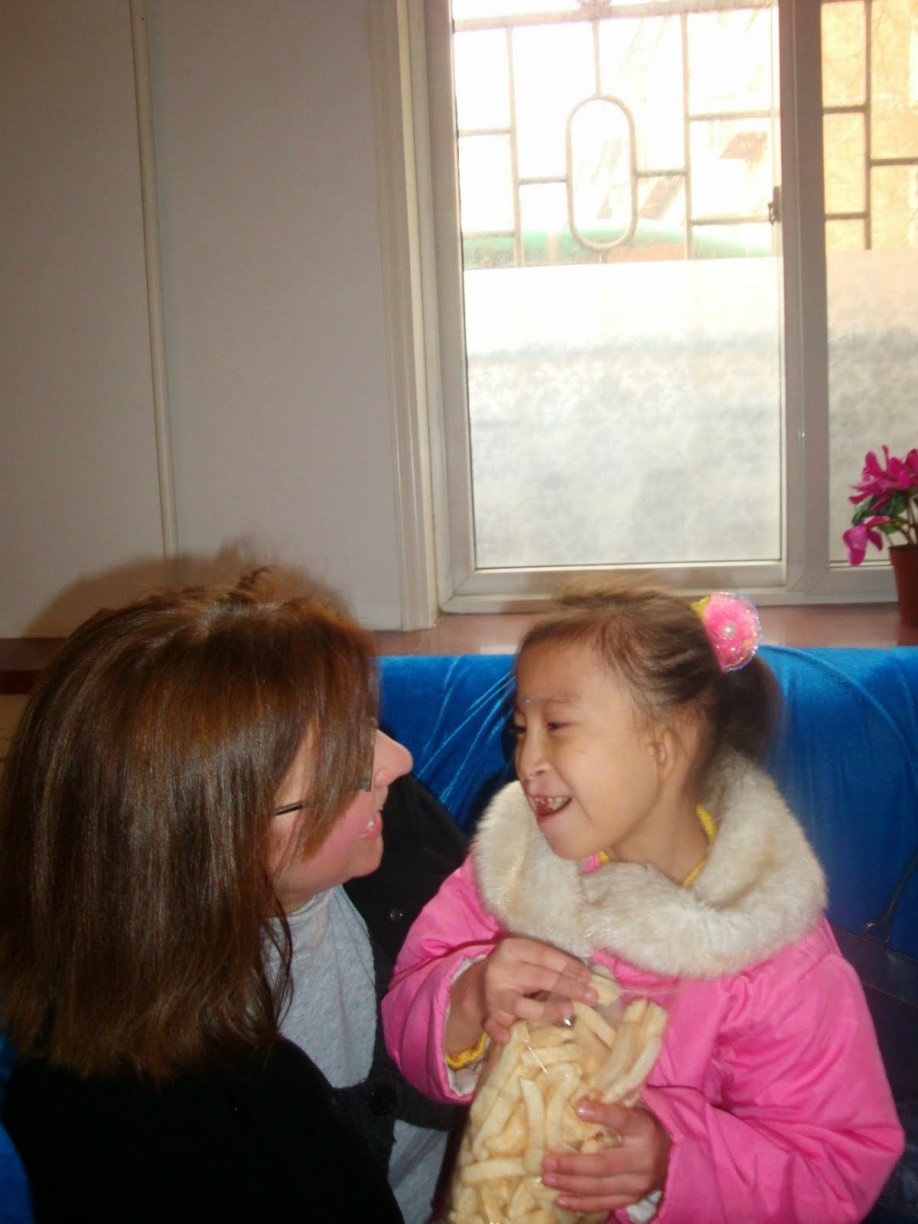 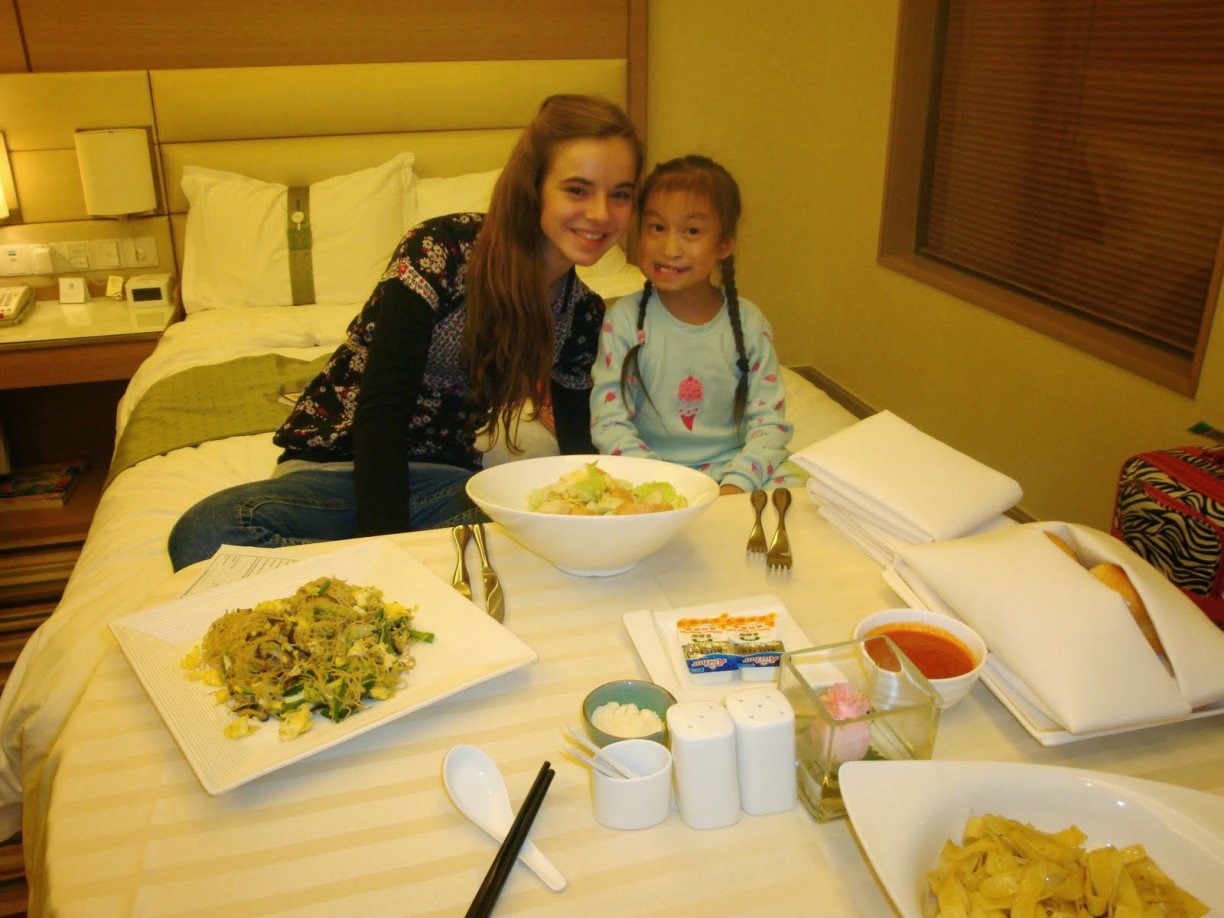 In the hotel in China (she was about to turn 8 years old and when we landed in the States she weighed a mere 27 lbs.)

It was such a beautiful time – we arrived home on Christmas Eve 2009 – two days before her 8th birthday.  What a Christmas miracle – Jubilee Promise was finally home – forever.

Meeting Baba and the siblings at home… 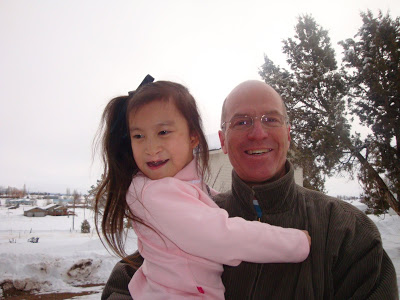 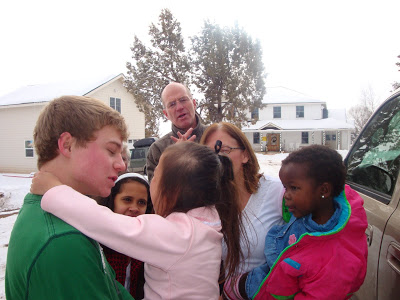 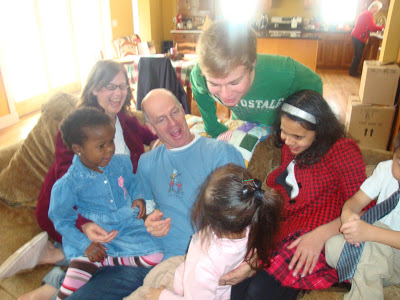 In fact here’s how I wrote when we arrived home:

I had not slept on the flights, cause little Miss wasn’t sleeping either (which time zone-wise was wonderful – really). And with no sleep for her, I couldn’t leave her sitting there on a flight filled with Chinese speaking people while I dozed…so I was awake….and then by the time I got in to the hotel in Albuquerque it was 1:30 AM….and Emma was up and in the shower at 5:30am so we could hit the road for home….she wanted to get to a doctor, if possible, on Christmas Eve…..(she did and has a horrible case of strep)…..so four hours of sleep on top of sleepless flights left not much in reserve….thank you Jesus for adrenalin. I know, right?
We were on the road for home at 6:30 am, it wasn’t even really completely light out yet…..I told Dw about 8:30 that we were already 2 hours into the trip….so stinkin’ fun to be finally two hours left till home….and we pulled in our long lane about 10:30am….
Jubilee giggled every time I would tell her as we drove the four hours in the truck that we were going to see Baba and all the kids. As much as she understands, she was tickled to pieces!! Emma felt too yukky, but I sang Christmas music as we drove and she watched me intently as I was singing away….I know, I know, probably thinkin’ – wow mama, I sure hope you don’t sing in public!! (Not to worry girlfriend – your mama knows better!)
Baba and the kids and Grandma and Josh were waiting in the driveway jumping up and down as we pulled in honking our horn for the last mile or so!! *giggles*    We all snuggled for a few hours and then had to head to the Christmas Eve service where many of our friends gathered to meet Miss Jubilee Promise. She was lively and animated chattering away in Chinese….
Daddy spoke on God’s unconditional acceptance and deep love for each of us. When he had left the front row to go up to speak Miss Jubilee (who had been sitting comfortably on his lap during worship) started squawking loudly. He soon called her up and showed her to the packed crowd. Through tears he talked about his instant love for this precious little one who so desperately needed us and has waited so very, very long for us to come. I’m not sure how many dry eyes there were after that…..she worked the crowd – for sure!! 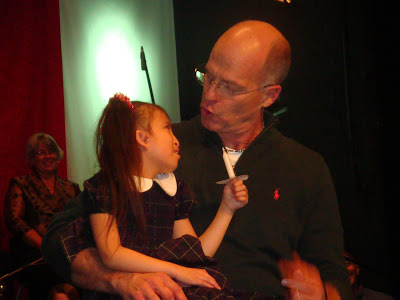 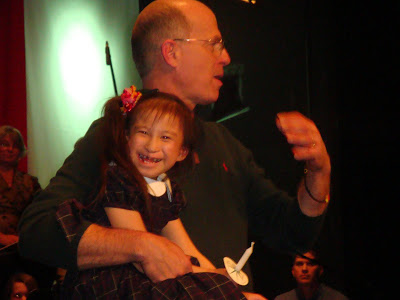 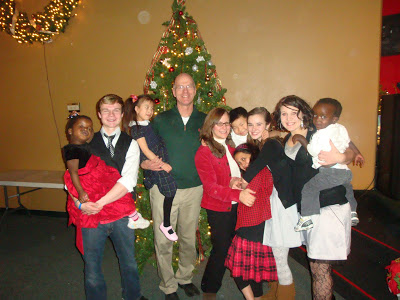 Our Christmas Eve photo from 2009

Yes, yes she did.  Our precious “little mei-mei” girl is eighteen!! 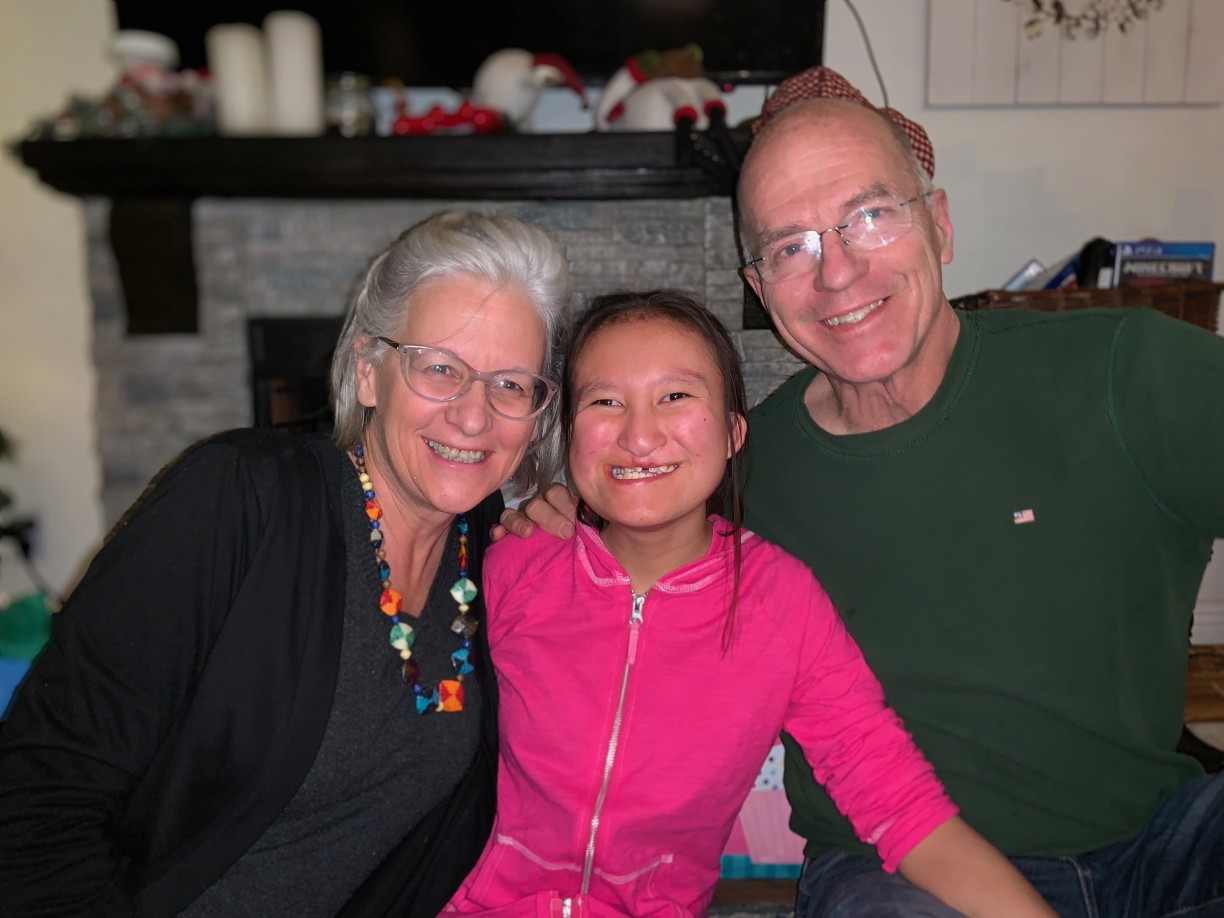 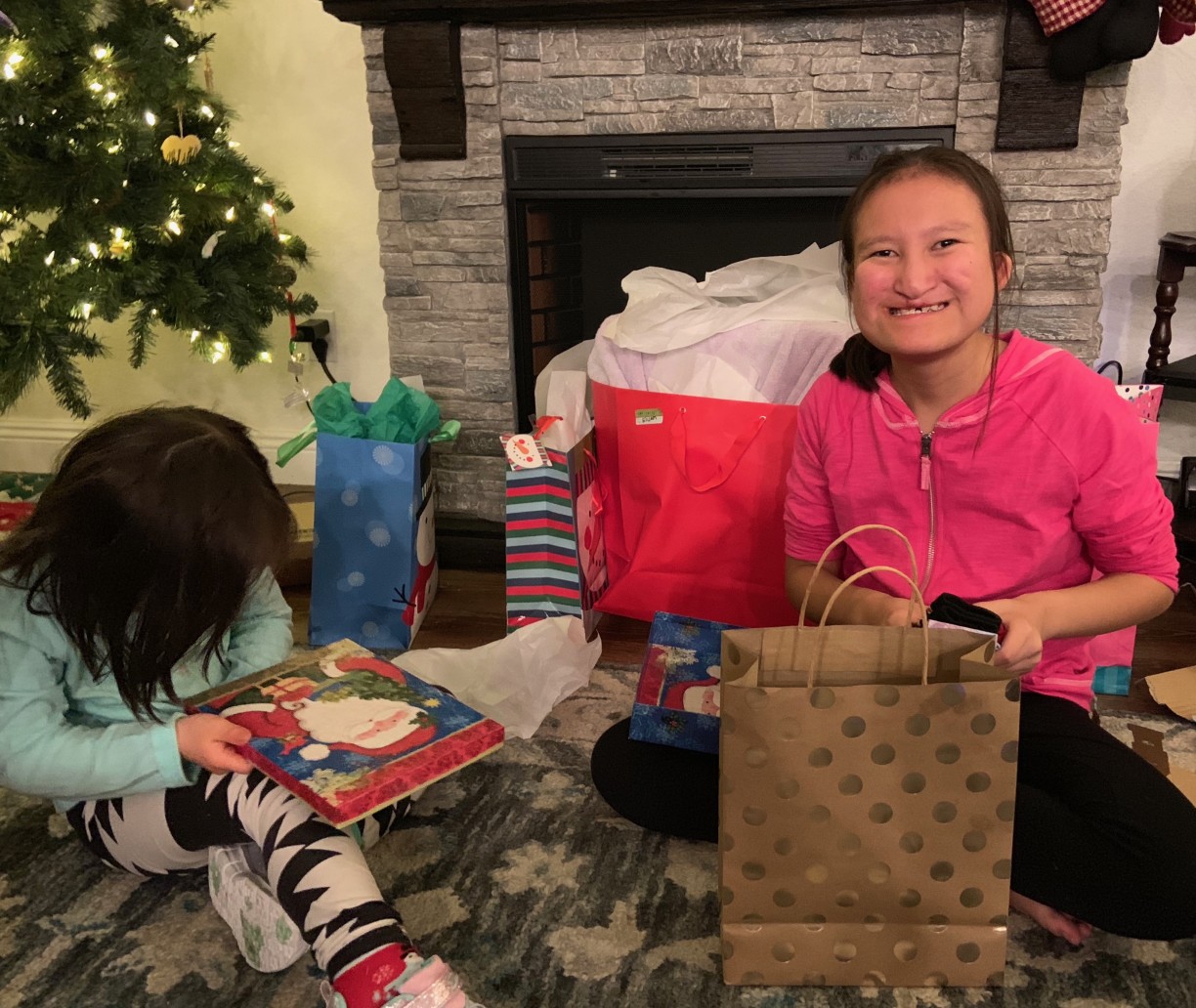 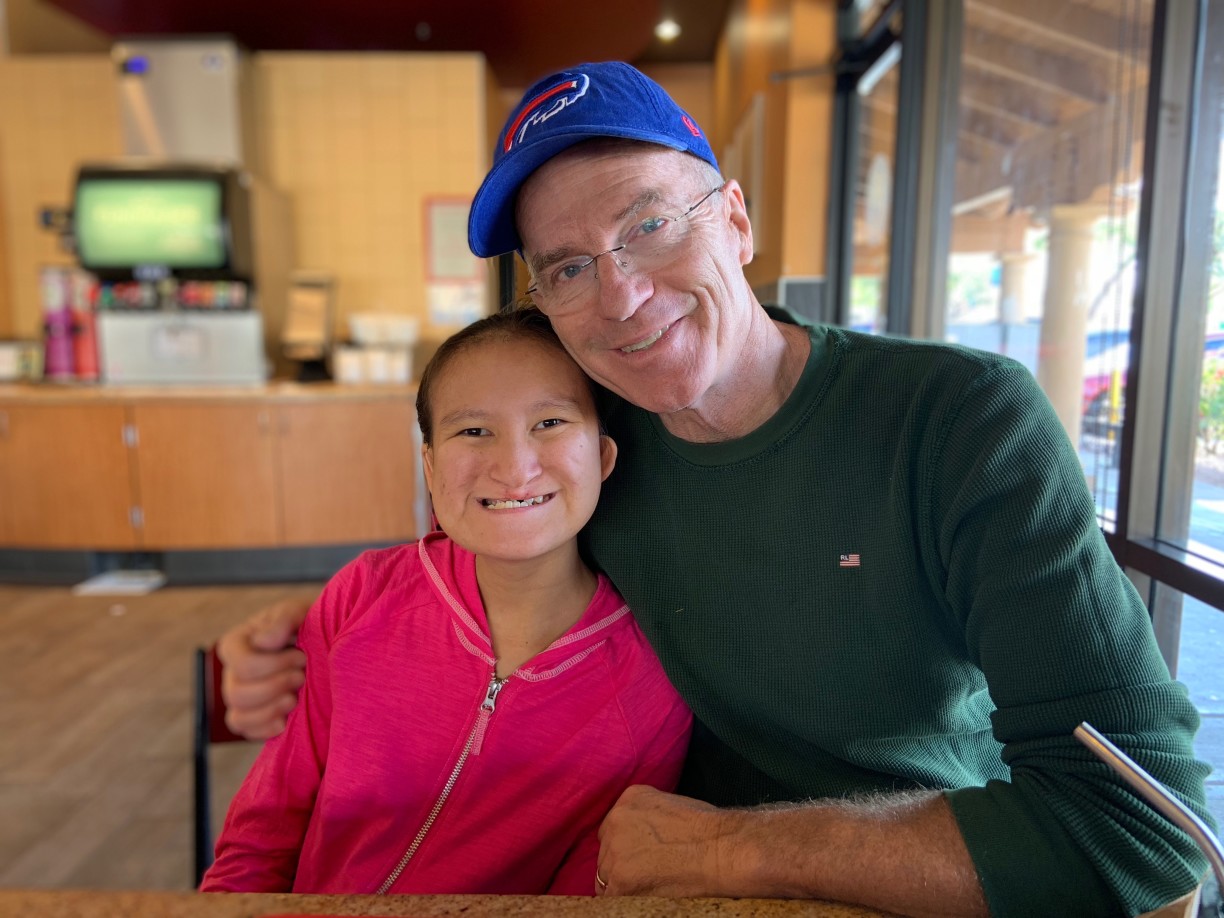 And for her 18th, everyone’s little mei-mei ordered breakfast burritos and fresh pomegranate served on the couch as she lounged.  Lunch with mom, dad and Ruby at Panda Express cause you know, it’s always gonna’ be Chinese!  Spaghetti followed by cheese cake for dessert, then going to see Star Wars with daddy and her siblings.

Emma had drawn Jubilee’s name in the siblings exchange and while home had found a pair of Star Wars jammies.   Just before they headed out the door to the movies, I asked her if I could snag a pic in her jammies for the movies.  Her expression at the top of this post says it all.

Awww friends to think we could have missed this treasure. There were a million reasons why we could have said, “no” or “we can’t – our life has become a wreck”….like we already had eight kids, the house fire, the exhaustion, the “lifer” thing, but friends, we would have missed out on one of the greatest joys we’ve ever known.   Not one of us could imagine our lives without her.

In fact a few months back Graham and I were alone in the kitchen talking as he turned to me and through tears commented, “Mom, I couldn’t imagine our lives without Jubilee.”   And yes, even in our 60s (one a little further into them than the other so goes the rumor but I’m not sayin’ who) ….Hands down – Dw and I still think we have the greatest gig going on – we love our lives with this girl and all the others who stole our hearts away at that incredible first glimpse.

Happy Birthday precious Jubilee Promise – you are a treasure to our souls and we would never, ever, ever want to imagine our lives without you.

If you would like to wish Jubilee a Happy 18th Birthday I will read each wish to her!

PS  When I wrote in 2009 about Jubilee watching me sing that day as I drove home to Colorado from New Mexico, little did I understand that she was actually trying to read my lips because she was profoundly hearing impaired.  Oh the adventures we have had with our precious girl and without hesitation, truly – we could not possibly love her more!!