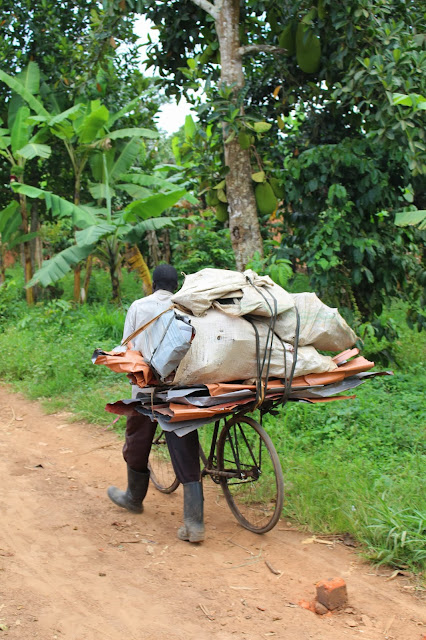 The picture above is common in Uganda.
Large items balanced on skinny bike tires
that were certainly never meant for carrying
such heavy, bulky and gangly loads.
No doubt, the carrier of the goods must work
tediously to balance
with precision the weight of each load.
I have marveled for years at the industrious
internal fortitude that is needed to make
it all happen without incident.
And then it hit me:
How many times do we take on burdens,
worries and fears
that were never meant for us to take on?
Truly, I know you know what I mean.
The team had an awesome time of ministry
yesterday and it continued on until the midnight hour.
But then as I went to bed, I just couldn’t sleep.
Normally, sleep overtakes in seconds as my
head lands on the pillow.

But last night, sleep just wouldn’t come for me.
For one, our precious daughter-in-love was laboring
on the other side of the world.
Concerns for a little orphan I held yesterday morning.
My friend battling cancer.
An email about a little girl who just had a stroke.
Another friend who has just began chemo.
A precious friend who needs an enormous mountain moved.
A heavy situation we are still waiting to hear word on.
Texting another daughter on a layover.
I began to read my Bible for peace, comfort and wisdom
in the wee hours.
I read and read and read.
Many chapters.
I prayed.
I worshipped.
I re-read the same chapters.
And then I re-read them again.
Over and over and over.
And I realized that I was attempting to carry
things I wasn’t intended to carry.

Almighty God has to be my burden carrier.
He has to take the heavy, bulky, and gangly loads
but He can’t just take them,
unless I give them to Him.
Silly me.  I know these things.
But I just couldn’t get there last night.
It was after 5 am when I finally fell asleep,
but not before much prayer, reading my Bible and finally
giving them all to Him.
How about you…
What are you carrying today?

What burdens you were never intended to carry?
Give them to Him.
Let Him carry them {and you}.
He wants you and I to sleep,
trusting Him and Him alone.
He’s up working the nightshift on our behalf.

He is always faithful,
when we give our burdens to Him.

7 thoughts on “The Load”