Hey friends!!  Where has the time gone?  Can I just say that I’ve missed you!! Yes, I know you didn’t go anywhere!  For the record, if you don’t hear from me for a few days, you can be assured that I am beginning to get antsy that I haven’t been able to write!!  I’m telling ya’, spending time with you all is therapy for me!

I have an amazing story to share today that serves as a reminder of just how much our lavishly loving God loves each of us and how He love, love, loves to answer our prayers!! Specifically!!

Listen to this and let the Lord encourage your faith!! 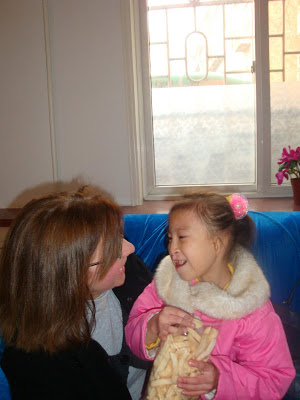 Recently I received a phone call from my longtime friend, Kathi.  Kathi works at Chinese Children and was in the midst of a meeting when she phoned.  The group meeting together were talking as they looked for a connection to a problem they were trying to solve that involved a group of sweet orphans in China.

In the meeting Kathi had remembered that I had once-upon-a-time met an influential woman who might be able to help or at least point them in the direction of helping them.

I laughed as she asked me….because it had been six years before…and I barely remembered the details of the meeting!  In fact it took me a couple of minutes to jog my noggin…

So the back drop to this story goes like this….

Emma, Jubilee and I were on the flight from Tianjin to Guangzhou to finalize the last step of Jubilee’s adoption before leaving China.  We were seated near a woman who seemed to be especially enjoying Miss Jubilee {Ummm, who wouldn’t, riiight?}.

Jubilee was engaging, animated and bubbly as this sweet woman and I chatted.  She was curious about Jubilee, our family and adoption in general.  It was an enjoyable flight as we talked.  This woman worked for the US Government in Guangzhou and was a woman of influence and authority.   As the flight was nearing Guangzhou this kindhearted woman handed me her card and told me that if we ever needed anything she would be more than willing to help. Wow. Such a blessing!

We didn’t need her help on the trip, but with Kathi’s phone call and my memory being jogged, I knew I would not have thrown out her card.

Well six years had passed and this saver-chica-mama suddenly knew the rainy day was here!  But where in the world could that little tiny business card be??

Oh me.  And to add a bit of mystery into the “where-in-the-world-would-that-card-be-mix,” we had moved four times, one across the country!!  Which means that God would just have to show Himself mighty with this crazy situation!!  Cause the God of the universe loves the orphan and He would certainly be all over this need!! Oh yes He would!

Of course I was eager to help the orphans, my friend and her colleagues and so I said to Kathi, “Okay, I have zero clue where that card would be, I haven’t seen it in years but let’s pray together and ask the Lord to lead me to it without any effort.”

I mean seriously, in my world, this was the needle in the haystack.  Where could that card be?  I had not seen it in many years!!  I mean, y.e.a.r.s!!

So I prayed a simple prayer with Kathi over the phone,

“Lord you know exactly where that card is, would you please call it into being from wherever it is and put it in a place where I can find it easily.”  Kathi and I prayed also that the Lord would intervene in the situation that was weighing on their hearts with some precious orphans in China.

As I finished praying I mentioned to Kathi, that there was one plastic folder that I thought I should check first.  It was buried in the garage, but I would go dig it out because that plastic folder seemed to be the most logical place for the card I had received in 2009. 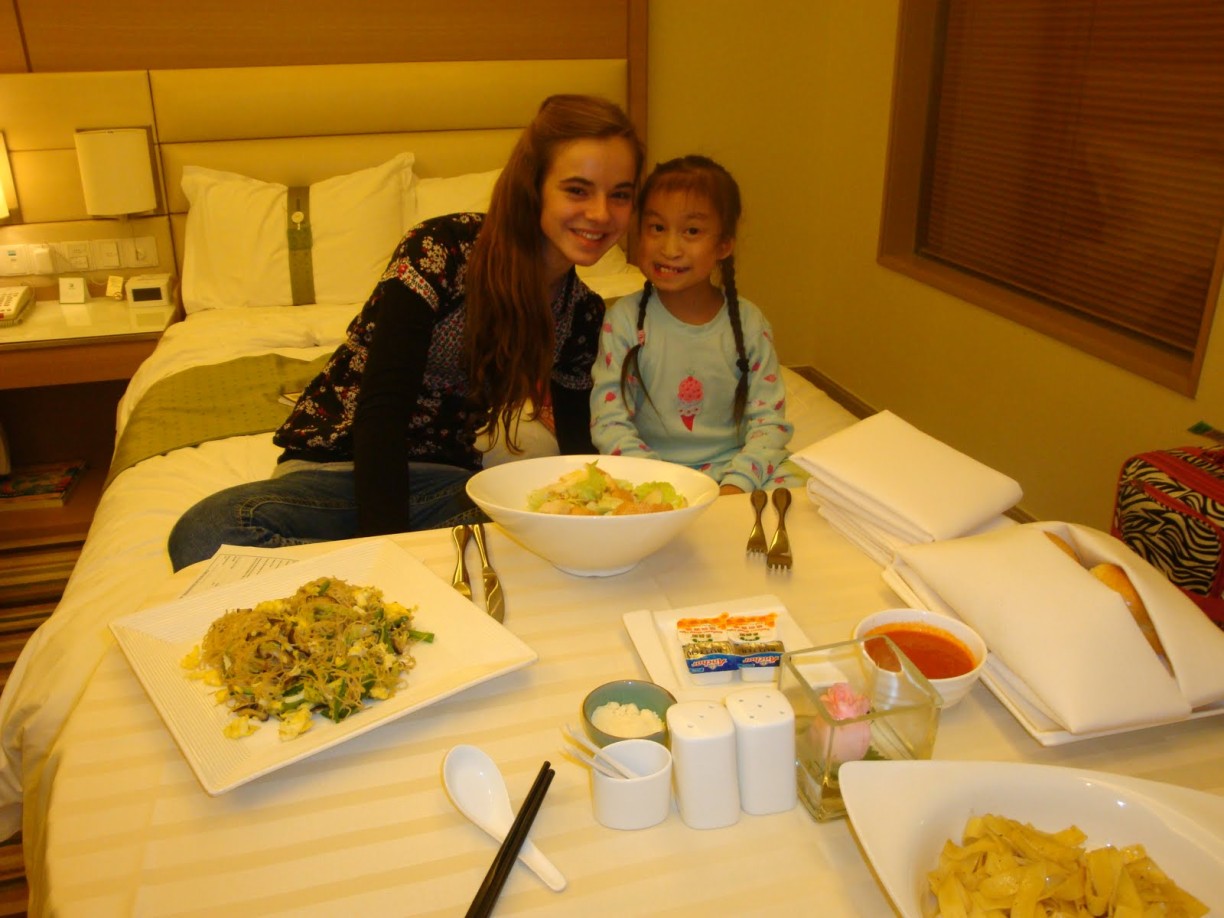 Emma and Jubilee in Guangzhou in December 2009.

We hung up the phone and I stood near the front door where I had been chatting on the phone with Kathi.  I whispered to the Lord, “Where?  Where is it?  Show me.”  I did not take any steps from where I stood talking to her.

As I whispered those prayers to the Lord, I turned my head toward the little library area of our living room and my eyes LOCKED.  Like, seriously, locked!!  I actually squinted as I still stood perfectly still because I was so very drawn to a little tiny white card about 15 feet from where I stood.

Friends, for starters, the black hutch/secretariat is normally not open.  It is, in fact, closed 99% of the time.  Although this day, for reasons only the Lord knows, the desk portion was open and down.  I later asked the kids who had opened it and Elijah said he had as he needed to put something away and had not closed it.

As I stood there perfectly still and my eyes locked on a tiny card.  Like seriously friends – look at what I saw {pictured below}…I actually placed an orange recipe card behind the card so it would be easier to spot what I saw…do you see it there? Beneath the red plastic folder is a white wooden letter holder with a glass front.  Do you notice a hint of orange inside the glass front?  Do you see the little, tiny business card?

I mean come on friends.  Look at this!!  I am standing approximately 15 feet from the open secretariat.  Inside is a letter holder with a little business card which was not accented by the orange paper.  I use that white, wooden letter holder semi-often, but never before had I seen that card there.  Never!! Remember I was guessing it was in the plastic folder where I put random little important cards that I might need someday {which I knew was in a pile in the garage}.

As I stood perfectly still locking on that card, I slowly moved toward it my eyes straining!  Could it be “the card”??

I took a close-up picture with the orange recipe card there to allow you to see it even more clearly. 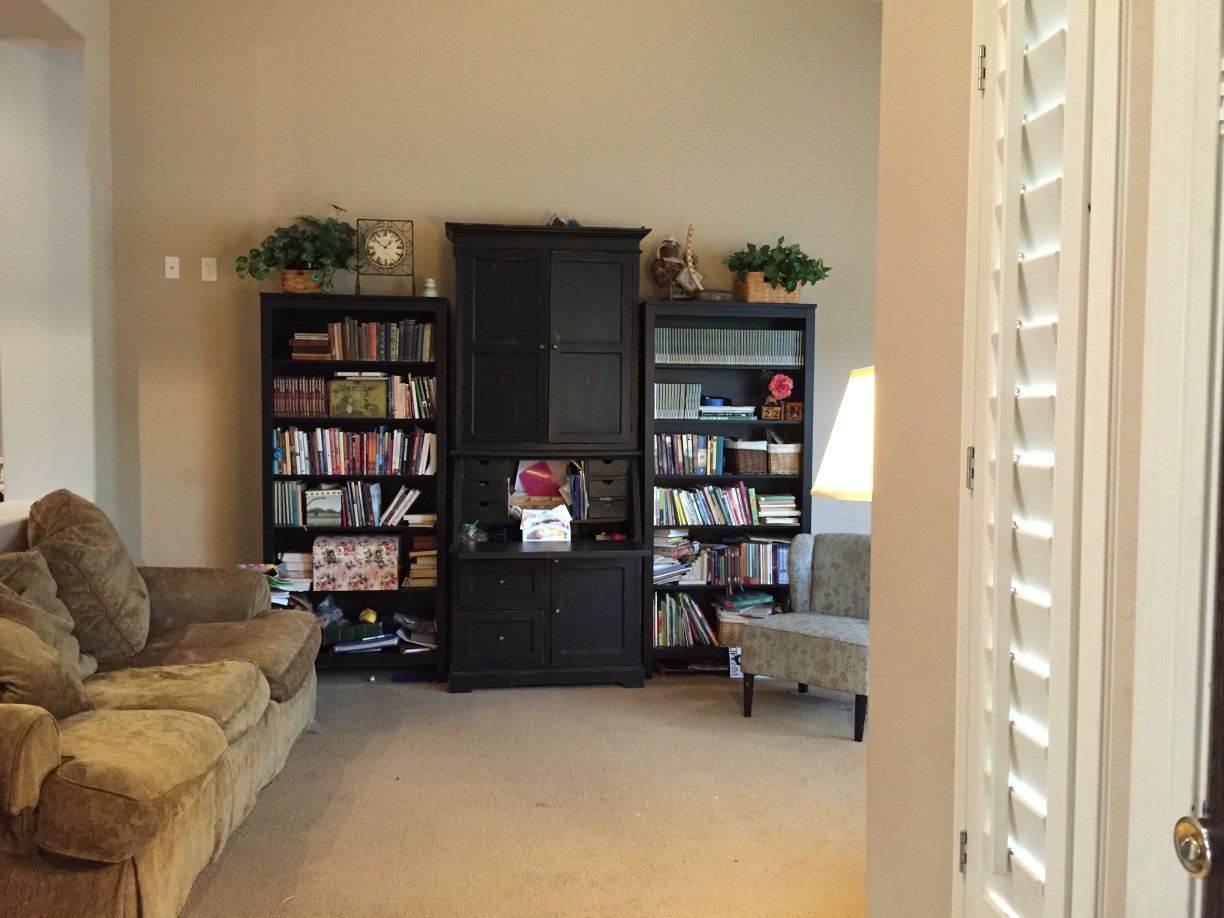 I gasped!!  I gasped loudly and began to giggle!!  Oh God!! You are so incredibly amazing!!!  You answered our very specific prayer within seconds of hanging up the phone!!  OH MY PRECIOUS LORD – no wonder we call you our Miracle-working, Mountain-moving, Awe-inspiring, Gasp-giving God!! 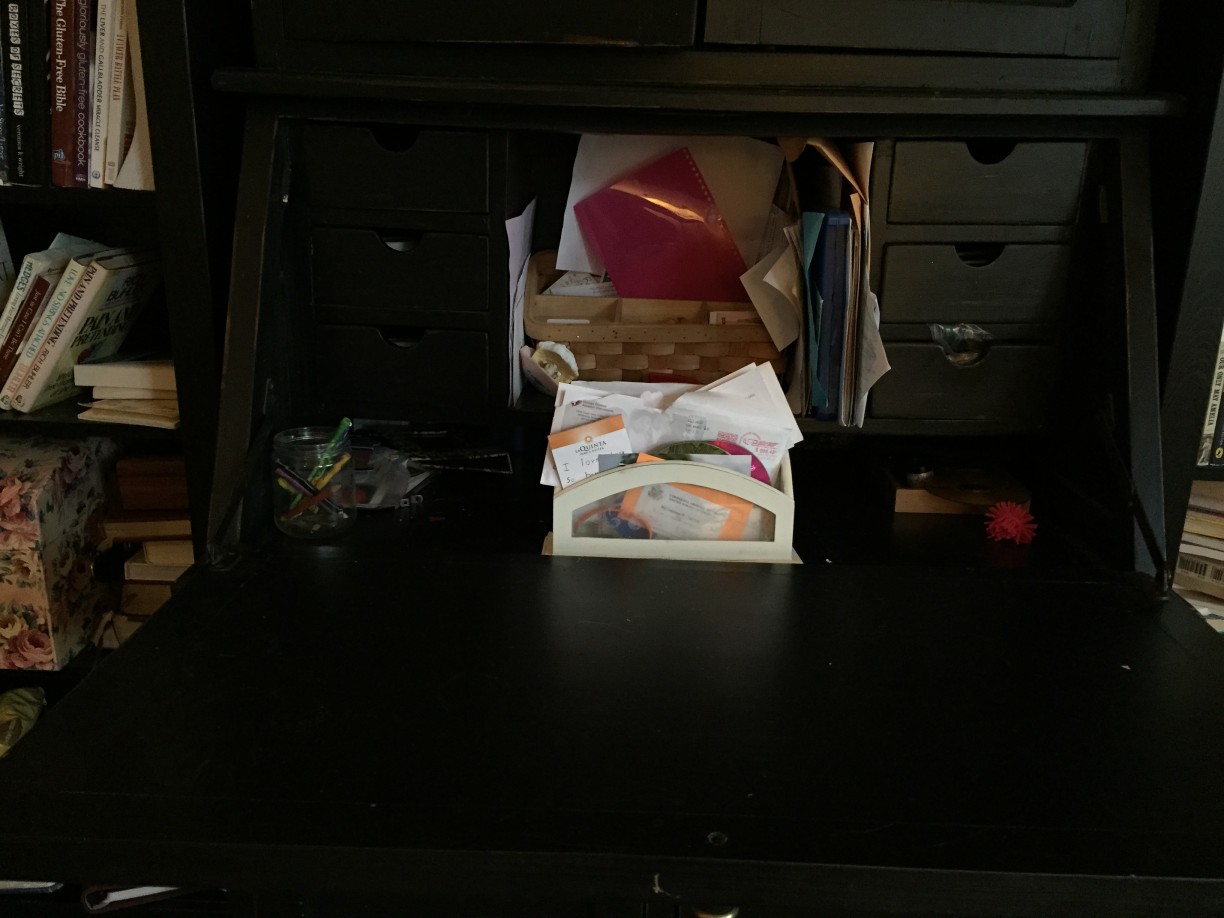 Friends, what do you need today?  Because if God cares where a little tiny card is, He cares about your needs as well!!  Come to Him today – He longs to whisper with you!

“Don’t worry about anything; instead, pray about everything. Tell God what you need, and thank him for all he has done. “   Philippians 4:6