“First of all, then, I urge that entreaties and prayers, petitions and thanksgivings, be made on behalf of all men, for kings and all who are in authority, so that we may lead a tranquil and quiet life in all godliness and dignity. This is good and acceptable in the sight of God our Savior, who desires all men to be saved and to come to the knowledge of the truth…”  I Timothy 2: 1 – 4

Last summer I received an interesting email.  You know how it goes….you kinda’ wonder if it’s SPAM that got through!  It said that we had been nominated as honorees for the Angels in Adoption Congressional Award.  Being honest, I had never heard of the Award and knew nothing about it.

I emailed the young woman back in DC who had sent it.  She was from Congressman Trent Franks office.  Yes it was true and yes, they wanted one of us to come to DC to receive the award in October.  Dw was teaching at the University and as it turned out I was really sick and although I had hoped to go, I was unable.  Bummer, but oh well.  Life goes on.

Fast forward a few months and as the Lord would have it we began attending Highlands Church with the completely amazing special needs ministry.  I rarely highlight posts, but just in case you missed it, here’s the post where I open my heart about being the mom to many Special Needs treasures and our once painful church dilemma – until Highlands!

Anyway, after we began attending Highlands Church we found out through our new precious friends, Doug and Missy, that Doug’s mom actually worked for Congressman Franks.  Oh wow!!! How wild is that??  We were like,  “No way!! Crazy story!!  We were honorees for the Angels in Adoption Award but were unable to go to DC to receive it.  Isn’t that a really small world??”

We could have never imagined that little seemingly random fact would trigger the most joyous evening for our family!  A couple of weeks later Doug’s mom, Shari, saw us at church and said, “Hey, I told Congressman Franks all about your family and he would like to come to your home, bring dinner and present you all, as honorees, the Angels in Adoption Award!  I told him all about your family.”

Never in our wildest dreams would we have imagined that a Congressman from the United States of America would come to dinner in our home!  Seriously, who could have imagined?  What a beautiful, spectacular, unimaginable kind of night!!  We loved every single minute of it!

We were so very humbled, honored and beyond thrilled to have this most rare opportunity! Congressman Franks sat on our back veranda talking with us for hours.  His twins jumped on the trampoline with our kids! We ate together!  It was a night to remember!  Truly incredible!! 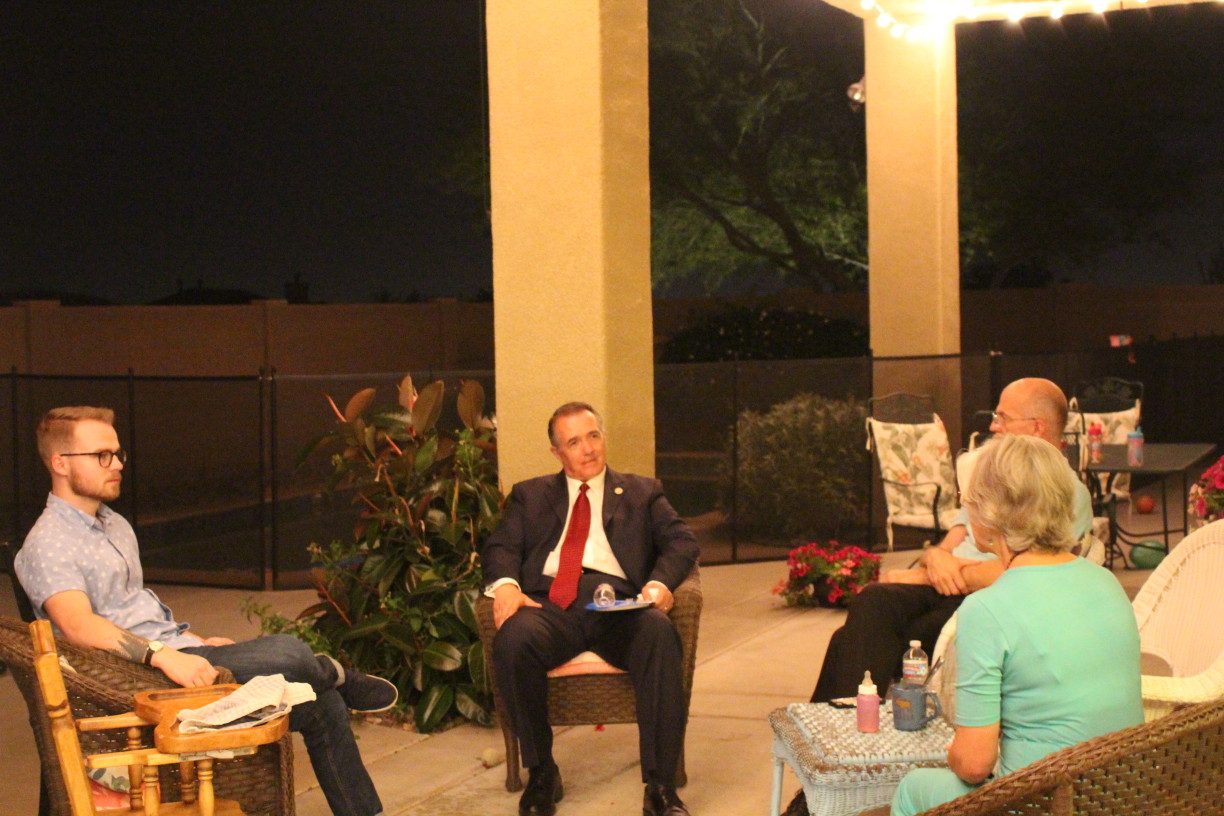 Congressman Trent Franks is a sincere man, who deeply loves the Lord, truly honors Him and seeks to serve Him above all else. His passion for the unborn is undeniable and he love, love, loves adoption!  His wife was unable to come, but their children are also adopted, how cool is that?

Autumn and her two treasures have been here visiting (with our 8th grandtreasure Sawyer!) and Graham and Savannah came for the evening…what a joy to have 11 of our 14 treasures home to be part of this most incredible evening! 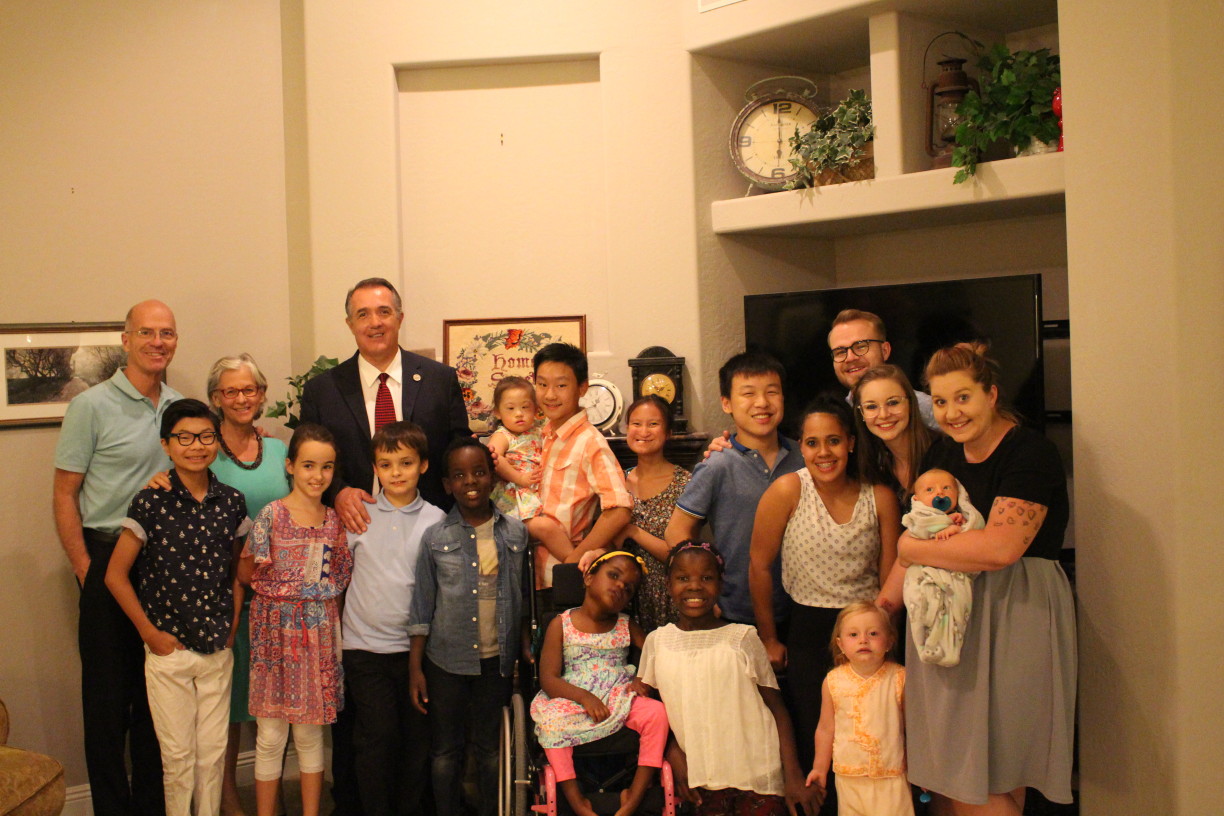 Missy and two of her treasures were able to join us as well and we drug them in for a picture too! 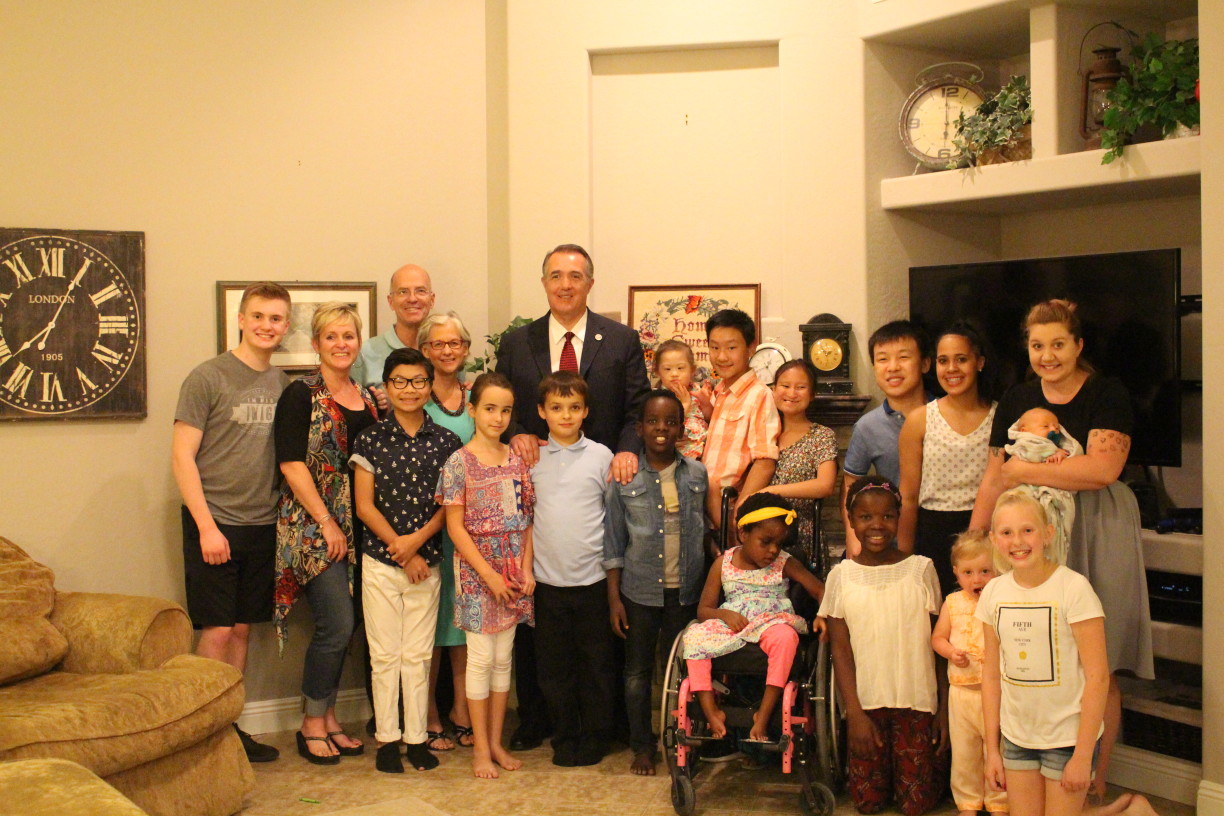 And as the Lord would have it, while with us Congressman Franks said two different things to Dw and I that encouraged our souls.  Being honest friends, it’s not very often that someone says something that we need to hear at that very moment, but it was such a beautiful word from the Lord spoken through him that I now have tears streaming down my face as I type.

Being a large family is a wonderful thing – we wouldn’t trade our lives for anything.  But 99% of the time, it’s not glamorous.  Some days are really hard.  Some seasons are rough.  Some moments are painful.  Congressman Trent Franks sincerely spoke words that will forever echo in my heart.  They came at the perfect moment and encouraged both of our souls.  The Lord’s presence was clearly felt.  We will forever thank our faithful God for this rare joy.   The Lord is so very good to us – who could have imagined this night?  Never in our wildest dreams!!!

The right word spoken at the right time is as beautiful as gold apples in a silver bowl.  Proverbs 25:11

4 thoughts on “Never in Our Wildest Dreams…”