Wait till you hear this!!  It was over-the-top and it was only the Lord!  Astounding to my soul that in this season of grief the Lord should bring such an extra-special, sweet blessing.  Listen to this…

Monday was our Johnny’s birthday.  It was his big, big, big one – 18!!  Sweet boy.  For a few weeks he has been saying that he wasn’t really looking forward to his birthday.  Why? Because he waited so long (14 years)  for a family that he didn’t want to grow up and be an adult yet. I can’t say I blame him – but I have promised him over and over that he will always be my little boy and turning 18 definitely won’t change that.

So last Friday (the 15th)  I was wondering aloud to Graham about finding Johnny-boy a used gaming device as he’s been saving for one and John was hoping Daddy and I would give him some money to help with the eventual purchase. But I just thought maybe we could find one used and buy it.

Graham then suggested that I post an ISO (In Search Of) asking if anyone had a used one they wanted to sell on the FB site for the area in the city of Phoenix that we live.  Well that sounded like a great idea so I went over to my computer on Friday afternoon and posted an ISO post explaining a bit about John’s situation and that it had to be this particular used device because of his quadriplegia.  I included the adorable picture below of our handsome boy which I had taken while in Buffalo last summer.  His smile is the best! 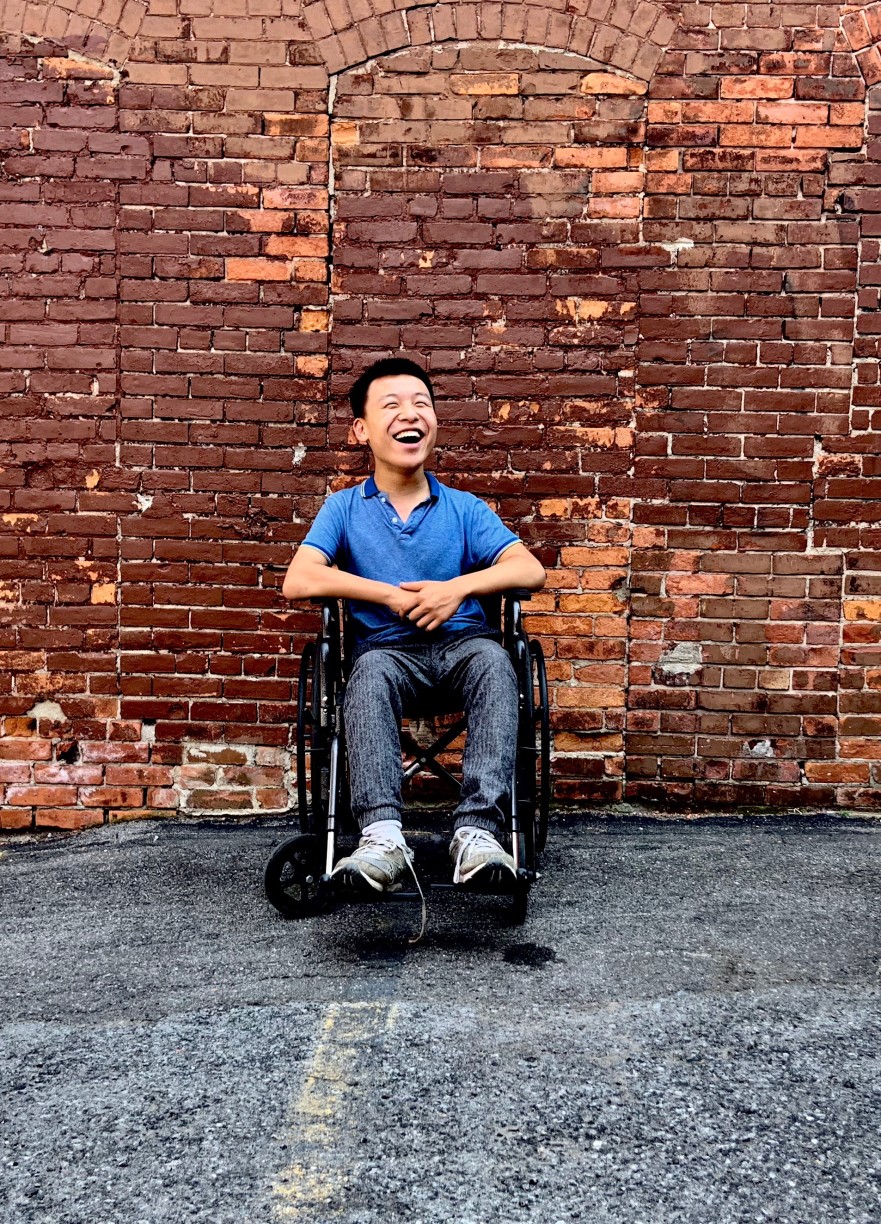 Within seconds comments began to roll in and although not one person had this particular used devise to sell, some were suggesting a different device (not really understanding that nothing else will work).  I loved all the instant enthusiasm and was reveling in their concern for helping Johnny get a used device for his birthday…and suddenly a sweet woman I’d never met or seen, Jennifer, questioned, “Can I donate $$ for you to get new?”

Well wow!  There was not a single molecule of my being that had even thought that anyone would suggest that and I was so stunned I didn’t even know how to respond.  Instantly another generous person, Lance, commented, “I’ll do the same!”…and from that moment on…the generosity from people we didn’t even know flowed freely.

One man, Elliot, even tagged several of his friends questioning them if they could chip in to make this happen for John. (Seriously, these people are amazing!)  I was laughing in disbelief! We don’t even know these people! And within maybe a little over an hour our community (along with a few friends from our church who saw my ISO post) had donated enough for a brand-spankin’ new device with the most doable hand controllers for our Johnny-boy to use.

Of course, as soon as I saw that we had enough money for the device, I wrote that the donations could stop as we had enough money to purchase it new.  About that time a kind woman, Suzannah, questioned, “Could I purchase a birthday cake for him?”  And under her comment Jennifer, owner of TinyTeepeeZzz, asked if she could donate a balloon garland and next, Ann, suggested a birthday drive-by/parade to celebrate John’s birthday.

Ba-Da-Bing-Ba-Da-Boom – the Lord always does the best planning!  He knows how my heart has been grieving the loss of my mom…and I’d been unable to even think about his birthday until Friday.  Yet He was working behind the scenes and graciously moved on the hearts of people who don’t even know John to bless him in a gigantic way! 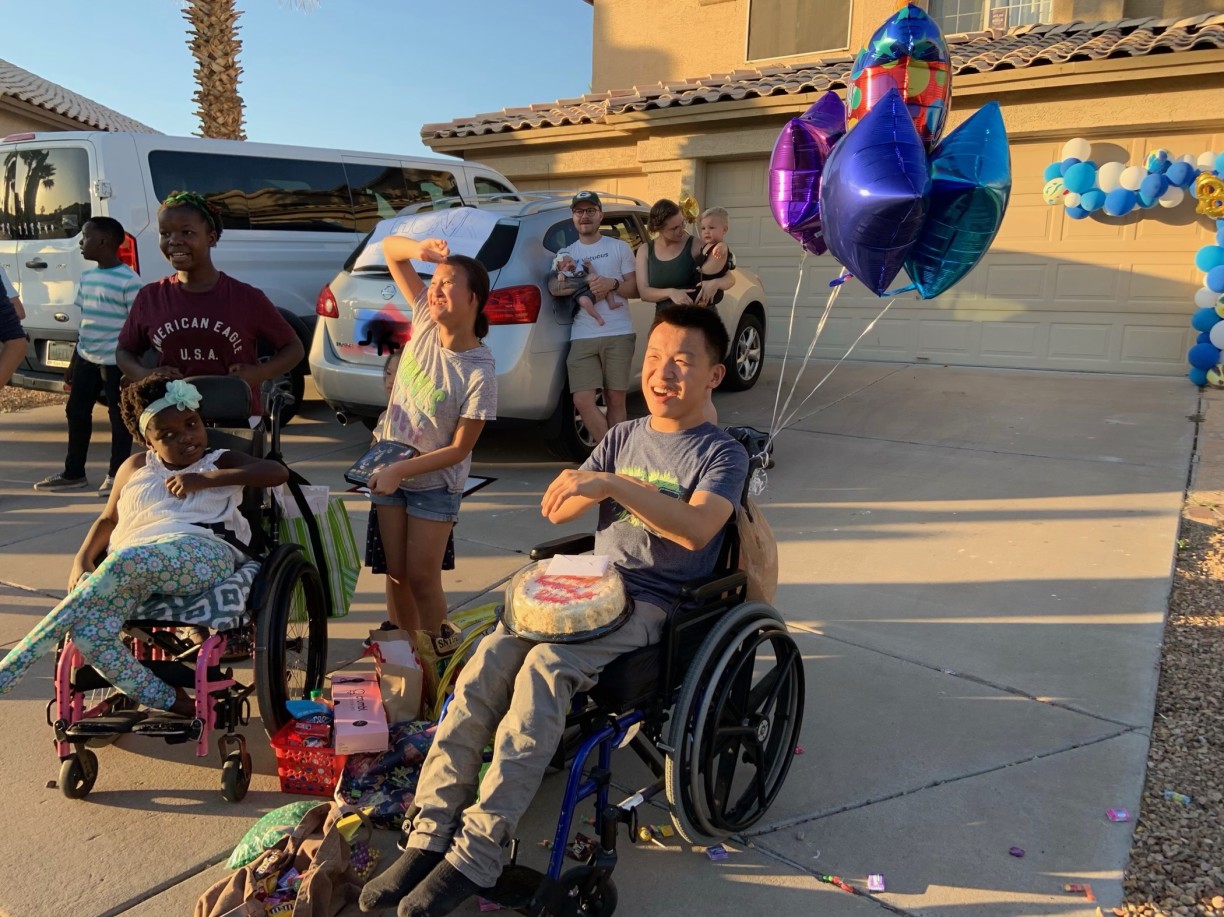 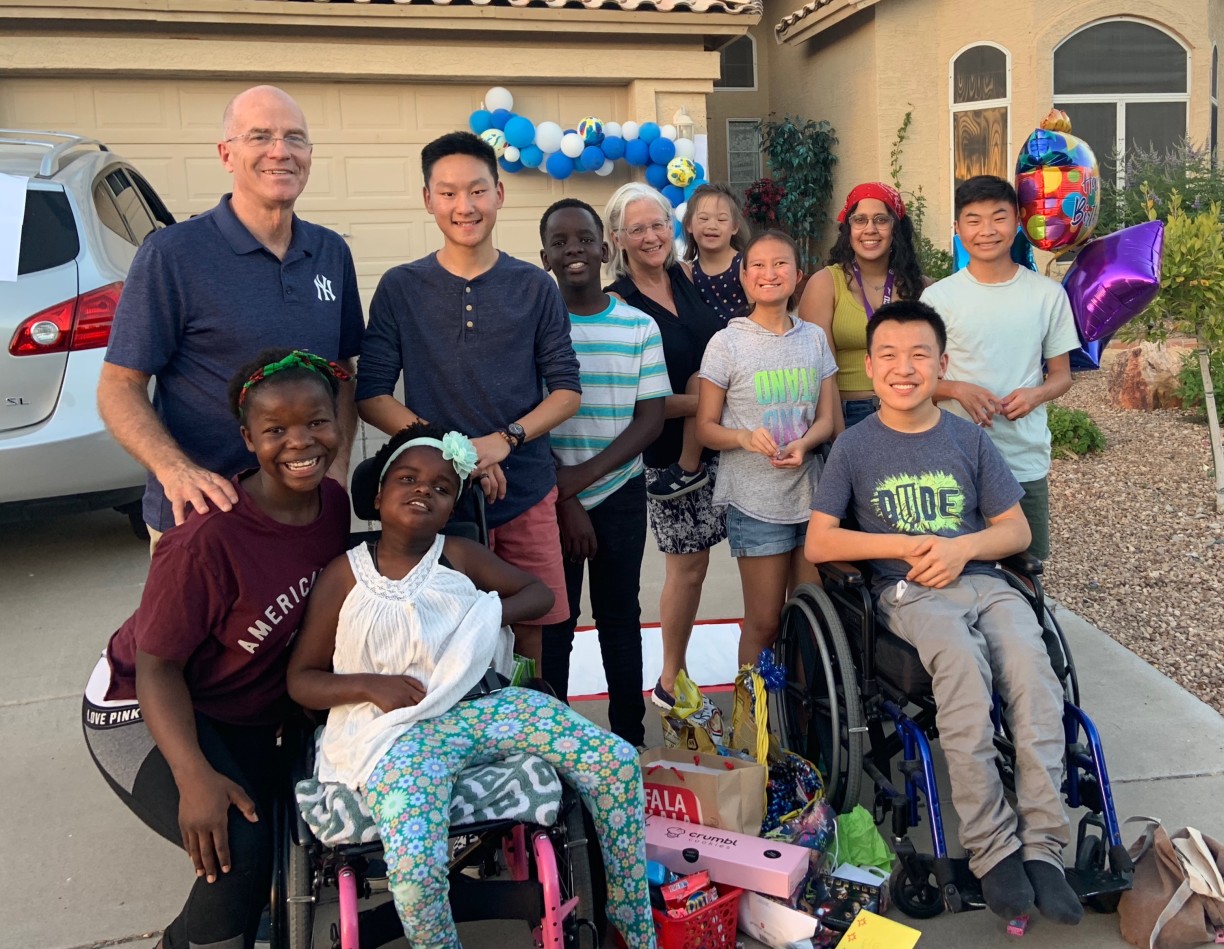 People in our ‘neck of the woods’ here in the city of Phoenix are incredible.  This is the friendliest place we’ve ever lived in over the last 41+ years and no doubt, we feel so very loved.  The parade was a blast!! Seriously, such a hoot.  People throwing candy at him, giving him gifts, a new friend named Samira even bought a carrying case to carry his new device in.

Johnny had no idea it was coming as I hadn’t told him – the element of surprise was the best! I had tried to think of how we were going to get him outside in the 100 degree weather.  I usually take a walk with Ruby after dinner so earlier in the day I had said, “I know! How about we take a family walk after dinner tonight?”  John’s face kind of dropped as I’m sure that spending his birthday on a family walk in 100+ degrees was not what he had been thinking (haha!) but the good sport he is, responded, “Well mom, if YOU want to, we can.”  Still giggling about that one.  As we wheeled the family for our proposed walk out the door, the cars were rounding the corner!  Perfect timing!

There ended up being over 30 cars including a few close friends who know us and love John.  It was incredible – many people we’d never met, friends from church, friends from our old church (over 40 miles away), homeschooling friends who don’t live near and even some car groups who heard of the parade from a woman on the post…wow, wow, wow!  It was unbelievable.  John’s story of orphan-turned-son was stirring hearts, no doubt!

How do we ever doubt God’s loving provision?  He is faithful – even with parties brought together in the most wild of ways to make an 18th birthday one that none of us will ever forget.  He loves us all so very much!

And this video says it all!!

Thank you SO MUCH to all who helped make John’s 18th birthday very THE BEST EVER!!