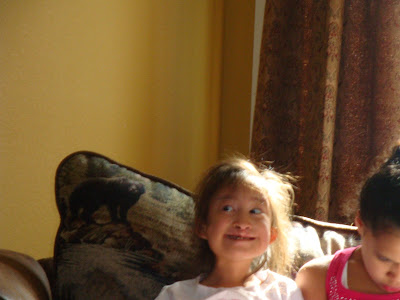 I know many of you have asked how Jubilee’s adjustment has been going. She fits in like she’s always been here. You who have adopted know what I mean when I say, “I can’t remember a time when she wasn’t here.” But there still have been some really tricky stuff to manuever (to say the least).

We knew when we we first started pursuing her that she had many special needs. Obviously, we weren’t sure what that would look like, but we knew that God was in it and so we forged ahead. We also knew that one day Uncle Mark would most likely be with us and since he’s a “lifer” (meaning he’ll be with us for the rest of his life although today he keeps muttering under his breath that “i goin’ home and i gonna’ stay there” – not sure why he’s so unhappy. ugh) we were really comfortable with the possibility that Jubilee also might be a “lifer”.

Adopting an older child has its uniqueness, shall we say. Some have many struggles. Some have fewer. With Jubilee being almost eight we wondered what that would mean as well. We really had no information on her throughout the 600+ days we waited. We only got one update during that entire wait, and so we had no idea what to expect.

Many people bringing home kids use “sign language” (more like charades) to help them communicate between each other till the kids become so emersed in the language. We have been doing that on our end. But from the get-go, it was obvious that Jubilee didn’t have a clue how to “show” us what she wanted or needed. I would try to make her understand that using charades would help me to understand her – but was always met with a blank stare. Time after time I tried to get her to “show” me and time after time she would just look at me in bewilderment.

Dw and I would look at each other and say, “Do you think she will ever understand us?”
We both weren’t so sure.
Teaching her to say things went sort of like this:
Mom: Jubilee say thank you.
Jubilee: Jubilee say thank you (or at least something that sort of resembled that)
Mom: Jubilee say I love you Isaiah
Jubilee: Jubilee say I love you Isaiah (more garbled talk)
Mom: say please
Jubilee: say please (more garbled stuff)
When something was upsetting to her and she would be trying to tell me something I had no clue. She would chatter away trying to get me to understand and it really has seemed that she hadn’t realized that we were speaking a different language than her. Graham remarked that it seemed to him that she was saying the same things over and over and over. I thought so too. It’s been tricky, to say the least.
We began to really pray in earnest that she would begin to understand, even a tad bit, of what we were trying to say. We have prayed and prayed, cause really, if it is frustrating for us, we imagine it is pretty frustrating for her as well.
Well the other day I went to her and did some hand motions along with saying, “We are going to eat now, can you please go wash your hands?” She looked up at me and said, “Okay.” The glazed look was not there. The bewilderment gone. I shrieked and giggled and scooped her up in my arms and jumped up and down cheering – “Yippee Jesus, Yippee Jesus, Yippee Jesus!! You understood me! You’re getting it!!”
Just a simple “okay” but to us, words of gold. There was a breakthrough. Since that day there have been teeny, tiny steps. She is beginning to understand a speck. Our hearts rejoice!!
And so this Thankful Thursday, We just want everyone to know – don’t stop praying – but we are encouraged –
It’s going to be
“OKAY”!!