Skip to content
Facebook Twitter Instagram
Search
Close
Many of you were praying for us Monday evening
as Dw and I had the unbelievable privilege of
sharing a brief snippet about our new ministry
International Voice of the Orphan.
Our new church, Phoenix First, has hosted this
Pastor’s Conference for 35 years and
pastors come from all over the world.
There are many things pulling for center stage,
so when we were asked if we would
share a brief bit about IVO we were humbled and thrilled!
As we prayed about what to share,
the Lord impressed on us exactly what
would have the most impact.
The evening starts with the famous Parade of Ministries.
Ministries of all sorts carrying signs and
cheering as they walk/run across the stage….
the energy was contagious!
Phoenix First has ministries of all kinds and let me tell you,
each one was out in full-force!
Ministries to: those handicapped
{people in wheelchairs, stretcher-like apparatuses, etc.},
Foster care, post-abortion, crisis pregnancy,
prison, former-prostitute, Dream Center, marriage {NAME}
and the list went on – over 250 ministries!
It was truly amazing!
Then Pastors Tommy or Luke Barnett
interviewed a small handful
of the highlighted ministries.
International Voice of the Orphan
was the last ministry to be interviewed.
We had a long banner made which the kids were carrying.
I held Ruby – who was wide awake
{and dressed adorably I might add!}
Josh and Savannah walked with us as well.
When our opportunity came, Dw spoke first for a
moment about the orphan crisis translating to
163,000,000 orphans globally.
Then he handed the mic to me.
I said, “We would like to introduce you to
one of the 163,000,000.
Because it is all about just one.”
The picture of Emma holding Ruby went up on the
jumbo screen.  I continued, “Dw and Emmy, our 18 year old,
found this little girl last June lying in a corner
of an orphanage.  She was almost a year old
and weighed just 6 lbs.
Just 6 pounds.” 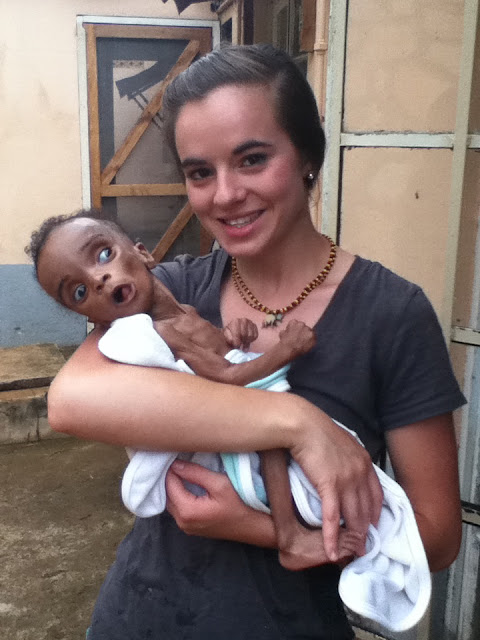 The crowd literally groaned.
Their groan echoed across the entire auditorium
as the thousands of pastors and leaders
gathered took in what exactly six pounds and
being almost a year old would mean.
I went on, “Dw began to advocate for care for this little girl.  She was dying!  Before long the director, seeing our deep love for her, asked if we would be willing to adopt her?”
At that point I turned Ruby around and said,
“We brought her home!  Please meet Ruby,
the little girl in the picture.”
Without warning, 2/3 of the crowd jumped to their feet on the floor seating and they jumped to their feet in the first  balcony…everywhere…and began cheering and clapping!
It was deafening!
Our hearts were overwhelmed at the outpouring of
love and joy for our precious little treasure!
Later Pastor Luke said privately to us,
“You moved their hearts.”
Yes, indeed, our once-emaciated-dying-little-treasure-saved-only-by-the-grace-of-God-turned-miracle completely and utterly
stole the show!!
Who would have guessed?
What God can do when He saves,
restores and redeems!
Our prayer is that Ruby’s picture and beautiful
face will never, ever be unforgotten by those
in attendance and that God will continue to
work on hearts around the globe to compel each to do something!
To visit the International Voice of the Orphan
website, look here.
For those interesting in adopting an orphan in
prayer through Elijah’s Hope, click here.
We have an IVO blog now…which you can find here.

28 thoughts on “And They Jumped to Their Feet”