Skip to content
Facebook Twitter Instagram
Search
Close
July 17th, 2011 changed all of our lives forever.
As most of you will remember,
Autumn’s boyfriend Karl was on his way to
pick her up for church but on the way Karl was in a
tragic accident resulting in a traumatic brain injury.
Many of you sprung into action praying round the
clock for his full recovery!  We will never be able to thank you enough.   The comfort to know that so many were interceding for Karl – words cannot even express!
ONLY GOD.
Karl was not given much hope by the first trauma surgeon…
BUT GOD.
Karl was med-flighted {for the second time that day}
to a hospital in neighboring New Mexico and
underwent immediate brain surgery
and still hope was very slim.
BUT GOD.
Everyone waited while Karl lay in a coma.
The prospects of a full recovery got smaller and
smaller with each day that passed.
BUT GOD.
Fourteen days into the coma and the
prospects were even slimmer.
BUT GOD.
Day fifteen Karl opened his eyes.
ONLY GOD.
The road of recovery with a traumatic brain injury is long.
BUT GOD.
He has been so faithful.
Today, Karl and Autumn were running errands.
A police officer pulled them over.
He saw Karl driving and asked him to get out of the car.
He slapped handcuffs on him and arrested him.
Autumn called Dw and I hysterically crying.
She couldn’t imagine what he had done!
She followed behind the police car carrying him
to the police station.
They had her go over to a room to wait to
see what was going on.
Suddenly Karl came out from a side door.
People appeared from everywhere.
Karl dropped to one knee.
He began to tell her how much he loved her.
How thankful he was that she had stuck by his side after the TBI.
Then he pulled out the most beautiful ring and said,
“Will you marry me Autumn?” 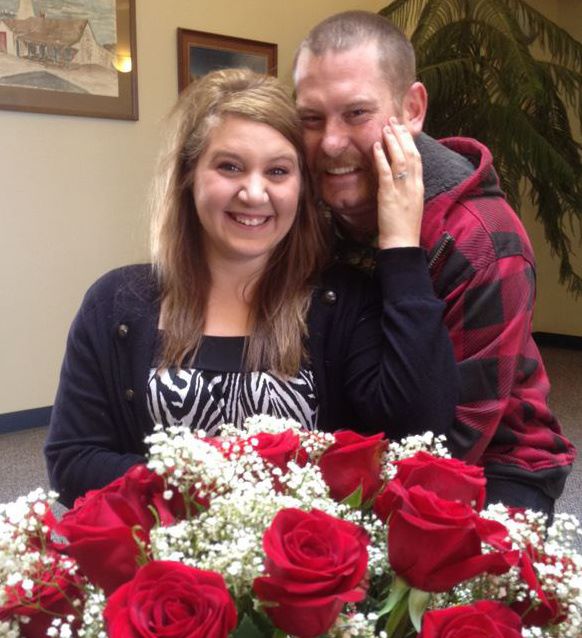 FAITHFUL GOD.
Miracles abounding!
{Karl had called Dw last week and asked for
Autumn’s hand in marriage.  But I have to tell you, Karl did not tell Dw how he was going to propose…so Dw’s words after the hysterical phone call from Autumny this morning:
“I’m gonna’ kill him when I see him.”
haha}
Our family is celebrating so loudly you probably can open your windows and hear for yourself!
ONLY
FAITHFUL
GOD.
He is the miracle-working, mountain-moving, awe-inspiring, gasp-giving God.
How we praise His precious name!!
Celebrate with us!