Skip to content
Facebook Twitter Instagram
Search
Close
This verse has been mulling around in my mind these last few days:
The mind of man plans his way,
But the Lord directs his steps.
Proverbs 16:9
With much on my mind, I was unable to sleep any longer yesterday morning.
I just really wanted to spend some time with the Lord.
I needed to hear Him whisper.
It was 4:50am and the sky was just beginning to lighten.
We haven’t turned the air conditioner on yet this season,
so before sitting down with the Lord I
walked around opening windows to allow the
cool morning air in.
Praying while opening the windows, I began to feel that after reading
my Bible I should write a blogpost about this verse.
But then I began to question.
Was that really what the Lord was saying?
So as I sat down to read my Bible,
I questioned, “Okay, I think you want me
to write about Proverbs 16:9, but would you please confirm it by having
this exact verse be in my morning reading?”
Each morning I read designated chapters using  this plan.
It is a plan that allows for the Bible to be read through in a year.
So really, to ask the Lord to allow this verse to be part of the
reading plan was kind of a seemingly slim possibility…
I mean there are over 31,000 verses in the Bible.
What are the odds that Proverbs 16:9 is one of the verses
designated for today?
Are you smiling yet?
Cause you’re right.
I clicked on the link and saw Proverbs 16 pop up.
Literally, my eyes grew wide.
So I have to believe that there are some reading
this post who are struggling or wondering or questioning
or asking the Lord for direction…
and some days you need it confirmed,
just like I do some days… 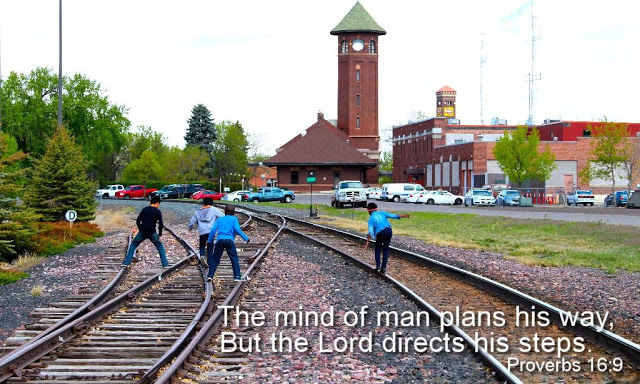 Throughout the years we all have many decisions that we need to make.
Some are smaller decisions.
Some are enormous.
Some days it’s just really hard to discern what the Lord is asking.
There have even been times when we have prayed, fasted and prayed some more,
still not quite certain we are hearing Him right.
Whatever the circumstance, when we have reached a decision,
we have prayed,
“Lord, we think this is the direction you are asking us to go.
So we are moving in this direction.
If for some reason we are mistaken, please see our hearts –
because we only want to please you!
And if we are wrong, please slam the door shut!!”
I remember one time, while Dw was in law school,
we began to think that the Lord wanted us to change career paths.
We prayed, talked and prayed some more.
I think we fasted too.
It was decided.
With only months till graduation
{What the heck were we thinking??}
we had decided Dw would quit law school
and we would move in a different direction.
[[We still shake our heads, seriously, we must have been out of our minds!]]
And just like that the Lord slammed the door shut!
We look back on that season and chuckle to ourselves.
We were so sure we were hearing Him right
and were making our plans,
yet in the long run He was directing our steps
and completely allowed the door to slam shut.

Praise His name!
Another time, when Dw was practicing law,
we were in Dallas visiting and a man approached Dw
about moving to join his law practice.
We liked the idea and were open to anything that the Lord would have in mind.
We didn’t know the man well, but he was a friend of a friend.
Dw spent time with him and then together we spent time as families.
It all seemed like this was going to be an awesome fit!
We returned home to make plans, pack and prepare.
And even though we were making plans,
God’s plans superseded our intentions and
within weeks the Lord closed the door!!

It was actually crazy how fast He slammed it!
About a year later we learned that this very man
had been disbarred!
We were shocked!
But the Lord had clearly protected us!
So friends,
if you are in need of direction today…
Pray, fast, and move in that direction
knowing that God who loves you so very much
is working the night shift on your behalf.
He will close any door that needs to be closed
and He will fling any door open
that needs to be opened.

And if He should slam it shut,
realize He has something so much better in store!
He adores you friend!

He’s got your back –
You can trust Him!