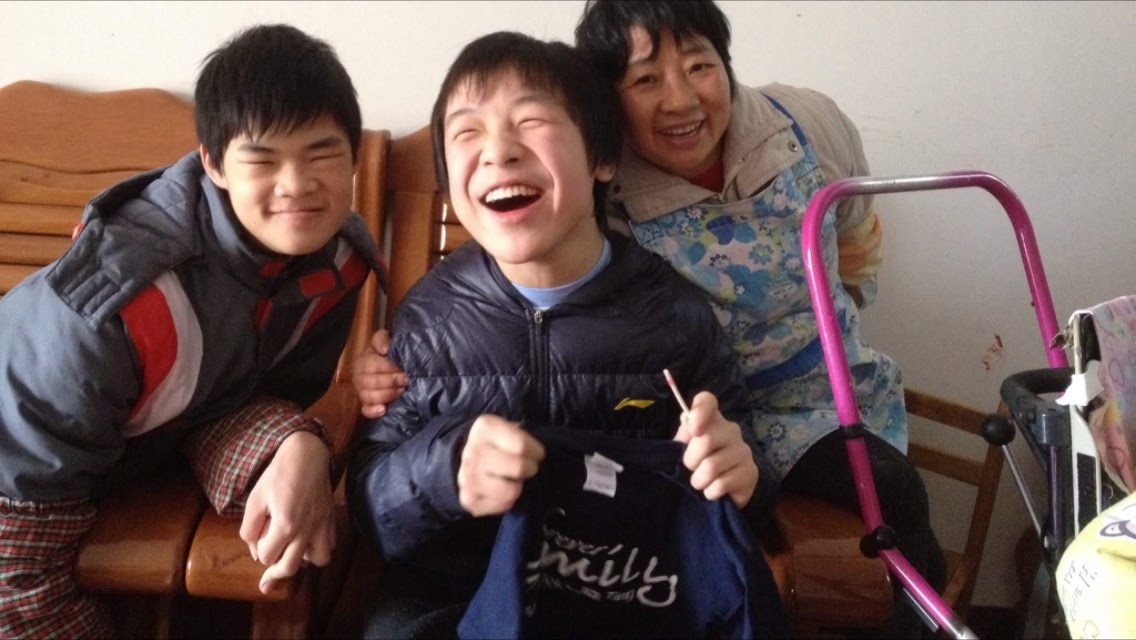 An extraordinary capture!!  This is the very moment our son found out he had a family coming for him!  It was taken about a year ago.  The picture, no doubt, captures the elation he had after watching so many sweet friends leave with their forever family while he continued to wait.  In the picture above our Vern’s holding his new family shirt and has just seen himself photoshopped into our family photo wearing the same shirt he now holds in his hands.

Who can imagine the emotions he felt?  And likely a tad of trepidation as it all began to sink in!!

So many precious little ones around the world just waiting, longing for a family all their own.

Of course when we said, “Yes!” to our aging-out son we didn’t know what to expect.  We just knew he was ours.

Sure we wondered how it would be bringing home an almost 14-year-old.  We also knew that this would be an incredibly amazing adventure and we couldn’t wait – after all, we’d been praying for him long before we even knew he existed!

I haven’t shared this very personal part before…

The morning I met Vernon is one I will never forget.  There is nothing quite as crazy-amazing as flying to the other side of the world and meeting that precious one that God ordained to be part of your family since before the beginning of time! Truly exhilarating!! 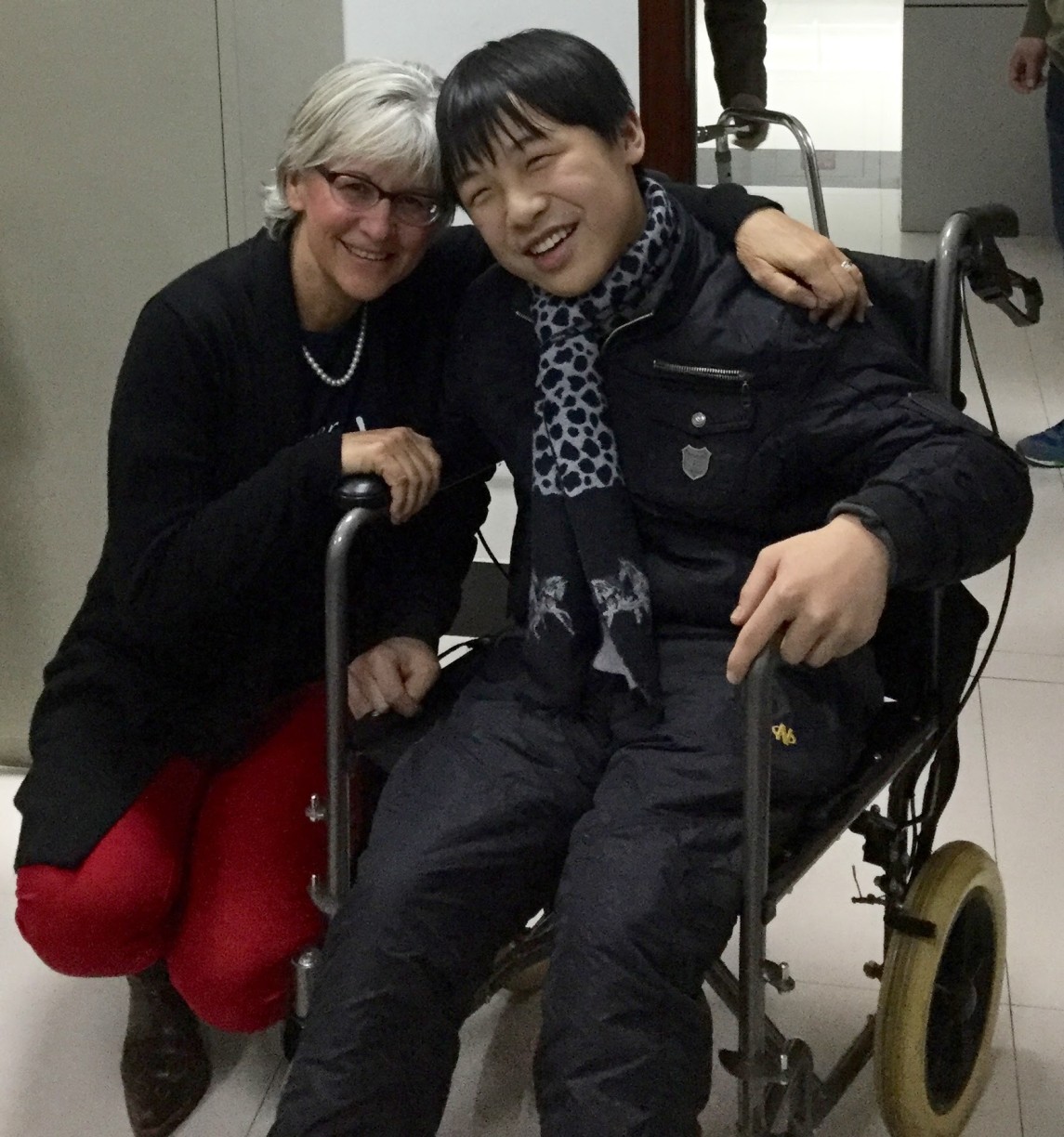 His smile just grabs me every time.

After our initial meeting, we walked out to a room with a big table where I would sign some temporary papers to take temporary ‘custody’ of him for the night.  The next day I would sign the official papers that would legally adopt him as far as Ch*na was concerned.

As we walked out to the table, he immediately turned to our guide and looked very concerned.  He spoke to her in Ch*nese with an urgency on his face.  I wondered what was wrong.  Translating as she turned to me, “He wants you to know that he cannot use a squatty.  He must have a western toilet.”

Sweet broken-bodied new son of ours.  I assured them both that the only toilets he would ever have to use from here on out would be Western toilets – mom and dad would always make sure of that!

Imagine the concern and worry he must have been feeling about the commode.  Seriously.  Most of us have no clue!

His expression at my response was one of complete relief!

A moment or two passed and Vern then turned to the guide again.  This time he seemed thoughtful as he exchanged some mandarin with our guide.  She turned this time and questioned, “He wants to know what his father does for a living?”

It is hard to explain through a translator that we have a ministry (International Voice of the Orphan) that serves the orphan…especially to someone who may have no concept of ministry at all.  Besides, after senior pastoring for just over 20 years, we still consider ourselves pastors, whether we senior pastor a local church or not.

So I explained to her that Vern’s daddy is a pastor.  She didn’t quite understand what I meant, so I explained it a little further.  She turned to him and translated that for him.

I will never forget the smile that broke across Vern’s face.  His eyes disappeared!! It was one of utter joy!

Okay, are you ready for this??  This son of ours had been praying specifically that his forever daddy would be a pastor because he wants to be a pastor when he is grown!!

Can you imagine that there was an almost 14-year-old boy praying on the other side of the world that God would not only bring him a family, but that his dad would be a pastor?

Somewhere along life’s travels, Vern had been introduced to the love of Jesus.  He had been told about God’s love for him and how he needed to be forgiven for his sins and ask Jesus to save him.  And Vern had done that!  It was then that he began to pray that God would bring him a family where the dad was a pastor because he wanted to be a pastor too!  Our Vern wants to tell others about the love of Jesus!! We’ve learned that even as he came closer to aging out, his faith remained steadfast.  He just knew God had heard his prayer and would answer and that his family was coming!!

I cannot write these things without tears.

And ya’ know the smile Vern has, which everyone readily notices and many comment on?  No doubt that smile reflects the joy, peace and love he has found in Jesus as his Savior!!

Need joy? Looking for Peace?  Having a hard time loving others? This Christmas I invite you to meet the Prince of Peace!!

That our hands were already very full.

That we had plenty of ‘needs’ right here.

That we should be retiring!

We could have missed this!

The reality of Vern’s prayers being answered through us is powerfully humbling, to say the least – only our ever faithful God!!

Eventually we left that civil affairs office with our new son. We headed back to the hotel to get something to eat.  Vern, Liberty and I spent the day exploring around the hotel together and getting to know each other a bit.

But that night something happened that was the ultimate icing on the cake!!

But I sat amazed as I watched this precious picture below unfold.

I had carefully placed his overflowing backpack (which he had brought with him) against his bed for easy access.  I had no idea what was in it.  So after finishing his shower,  he sat on the edge of his bed and digging through his backpack for a minute he pulled something out.  He wiggled himself around to sit with it.  It was a book.  I looked a little closer. 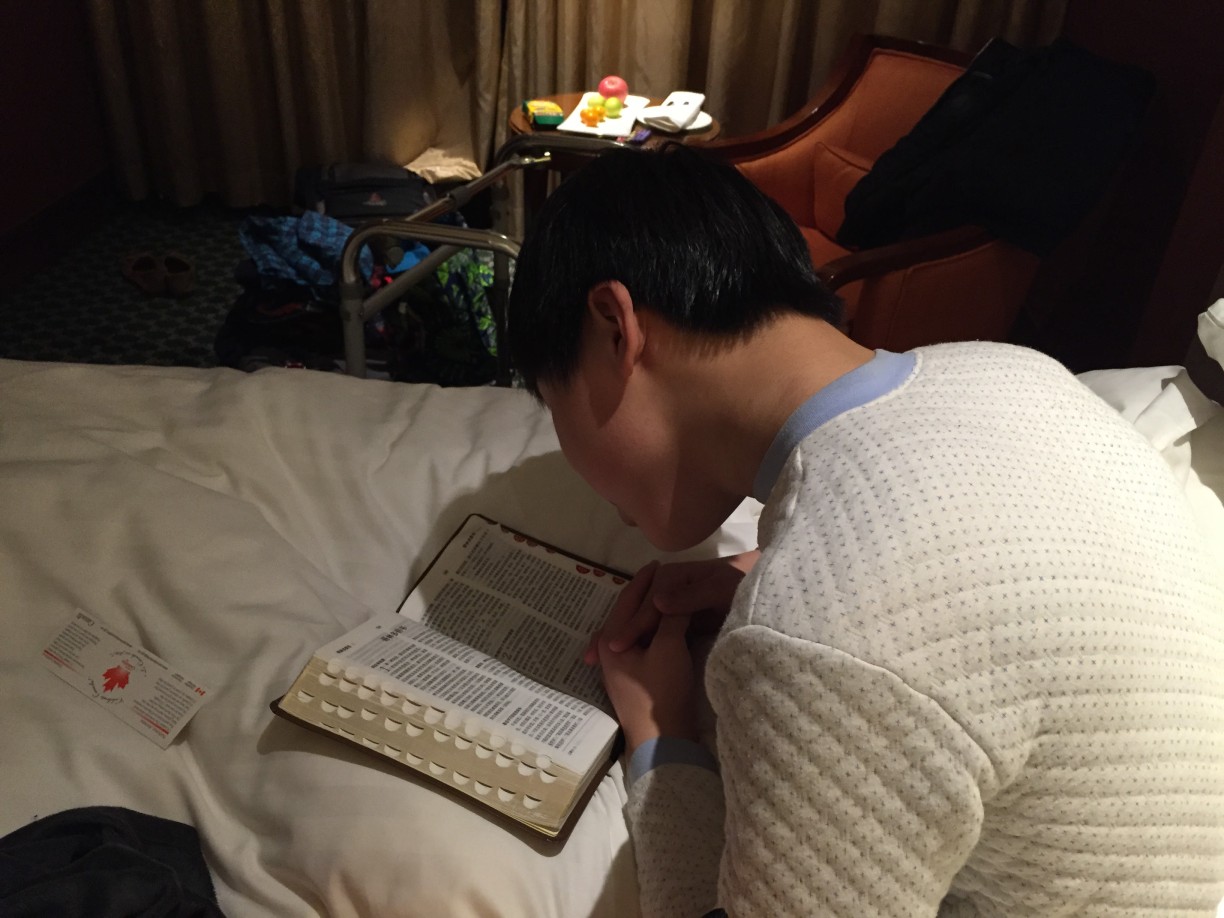 It was then I saw what he was reading and my mouth truly dropped open.

Our son was reading his Chin*se Bible!!

I began to cry!

There is no question that our Vern loves Jesus!!

And to think, we could have let fear, worry, our age or tiredness stand in the way!   We would have totally missed this treasure!

If you want to know more about Jesus, email me:  APlaceCalledSimplicity@yahoo.com  Subject: Jesus

35 thoughts on “A Very Personal Family Story This Christmas…”