If you’ve stopped by our Place more than a few times you’ve come to understand that one of my most favorite things to talk about is not only how much God loves to hear our concerns but how much more He loves to answer them and just how faithful He always is!

For years I wrote Memorial Box Monday, where I would usually share a personal story of how God answered our prayers…whether He rescued, miraculously met a need, divinely healed, dramatically protected or surprised us with something wonderful – He always wants to be actively involved in our lives and it has been my joy to share our stories!  I love sharing them so much that I wrote a second book and it was published this past summer.  It is full of stories, some new, some old, some never before told!

In fact we have a Memorial Box that sits in our family room that is overflowing with tangible reminders of each of these stories!  On Fridays at our home, we pull out a trinket and I share the story of just what God did! He has always been astoundingly faithful to us! Not everything has gone according to our plan, but no matter the heartache, His presence and provision has been very evident! 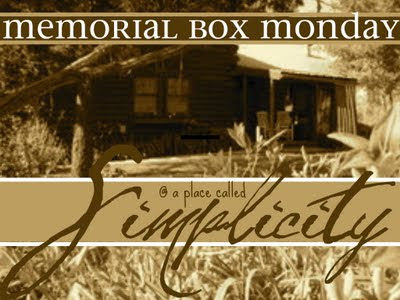 Although some of the stories could be deemed “enormous miracles”, many might be thought to be “tiny miracles”… but none the less, all from the hand of God and clearly indicative that He cares about the big things as well as the little things.  I’ve talked to many people over the years who just can’t fathom that God cares about the “little” things, they somehow have the idea that He only maybe, possibly, kinda’ might be willing to help if something is really big!  It’s so not true!!  His word tells us in I Peter 5:7 (esv) “Cast all your anxieties on Him, because He cares for you.”   All means all.

That verse alone is a power-punch for me!  How often anxieties can start to choke the life out of each of us! But we are to cast, throw, and toss our anxieties on Him!  For a word picture, when you throw a ball to someone, it is sent sailing into the air without possibility of return unless that person throws it back.  The incomprehensible thing about God is that when we throw our cares on Him, He never throws them back at us.  Not even once!  He keeps the cares, the anxieties, the worries to handle for us.

God loves us so much that He wants us to cast our cares on Him – whether they are giant or seemingly small!  The following story could be seen as small for some, but in my little world, this is a beautiful testimony to just how much my heavenly Father loves me.

In April I was very, very sick and we were unable to figure out what was wrong.  No one else in the family had been or was sick, so that all seemed odd to me.  Eventually, after a couple of weeks of trying to get well, and seeming only getting worse, Dw took me to the ER.  That trip proved to be a giant waste of time and I was sent home.  The next day I seemed even worse and when Graham offered to come get me and take me to the ER, I let him.  I was beginning to grow very concerned.  The ER he took me to was at the best hospital in Phoenix and immediately the ER doc knew something was seriously wrong.  It turned out, unbeknownst to any of us, I was in complete liver failure. It would take a true miracle for me to survive.   (I write about the miraculous journey in my book, The Memorial Box published this summer and available here.)

The journey back to health has proven to be a long one.  Although my liver is considered healed, it took many months for the numbers to return to normal.  I don’t think my strength is quite at full-tilt yet, but the Liver Transplant specialist said it could take a very long time, because my body took a “tremendous hit” when it when it was in complete liver failure.

Anyway, in the months following my hospitalization I noticed large amounts of my hair falling out.  As in gobs and gobs. I’d never seen anything like it and had always had very, very thick hair.  But before long I began to hate washing it because it was gross how much fell out.  My pillow was covered (and I mean covered) each morning.  My clothes looked like I was shedding.  The tremendous hair loss was all part of the liver failure and the “hit” my body took.  As I would shower I joked with the Lord, “Well your word tells us that the very hairs on our head are all numbered so I guess it doesn’t take you long to count mine anymore!”  Soon my very, very pinky-white scalp was very, very visible! Ugh.  I have friends who have had significant hair loss and I felt such compassion for them in a very up-close way!

But silly as it sounds, until about a month ago, it hadn’t even occurred to me to not just joke with the Lord about it, but to actually talk to Him about it.  As I washed my hair one day I asked Him, “Lord, would you please allow my hair to come back? I miss it!”  Friends, if His word says to cast all our cares on Him, that means even my pinky/white scalp with the silver hair loss!

Well last week I was brushing my hair in our bathroom and thought, “That’s weird, why is there all that fuzzy hair sticking up?”  I didn’t pause to pay any attention and didn’t realize what it meant, until I went to see Victoria, my precious hair stylist.  She’s been cutting my hair since we moved to Phoenix six years ago!  A delightful young mom who has become my friend over the years. Anyway, last week as she was cutting my hair she said, “Did you notice all your new hair growth?  Look at this! I have never seen this on you before! They’re everywhere!”

It was then that it hit me!  That’s what all that fuzzy stuff was all over my head that I hadn’t paid attention to the week before!  The Lord has heard and is answering my prayers!  Nine months after it began falling out, my hair is coming back!!  Now I cannot stop giggling at all the hundreds (or thousands – only God knows – ha!) little silver hairs sticking out all over the place!  He is astoundingly faithful – even caring about seemingly insignificant things like my silver hair loss!

How about you?  What concerns do you have? Throw them to our faithful God – He longs to hear from you and He loves to minister to your cares!

I will praise God’s name in song and glorify him with thanksgiving.

2 thoughts on “That Fuzzy Stuff”