Johnny has been home now for just over two years and some have asked how he is doing.

Life in China had been so very different!  He had rarely left where he lived as handicap accessibility is non-existent.  He had prayed specifically that he would have lots of siblings – clearly God answered that prayer!  But there is still the reality that he obviously had to adjust to being part of a family!   He went through a season of grieving for the familiar.  He missed his friends.  He missed his favorite Ayi who he was very close to.  He struggled with learning English – it seemed so overwhelming (we can only imagine!).   We had many, many long discussions.

As he settled in and began to feel safe he began to bring up other things that were on his heart.   He remembers well his abandonment and so much more from when he was a very little boy.  We have had to talk through and work through each of these painful realities.  One day he told me he wished I had been his mom from birth.  Overwhelming trauma each have had to deal with.  These discussions are so very hard as an adoptive mom.  They bring the sober reality to the orphan crisis – the “up close and personal” to what it all really means.  With all the heartache, trauma, grief – there is always a desperate longing in each orphan’s heart to belong, to be treasured, to be wanted by someone.   Slowly these topics continue to be worked through – as often as he wants to talk about it all.

Recently he’s had some very extensive, state-of-the-art medical testing.  One day in the not-so-distant future he will have extensive surgery.  We praise God for the medical possibilities that are available for our treasures.

Since coming home, Johnny’s dream is to be a chef or an interpreter or a pastor.  Although significantly limited, we work hard to find things that he can do with his one hand that he is partially able to use.

This Mother’s Day Johnny wrote a card to me on his own.  It said that he was so happy he had come home and that he loved being in a family.  He also said I was the best mom ever.  I cried when I read his tender words.  It meant the world to me.

All week Johnny has been volunteering at VBX at our church.  Yes, our church embraces, promotes the beauty in each and celebrates special needs!!  Each and every day and every event our treasures are loved on and valued!  He’s has been helping with games.  The pictures speak for themselves. 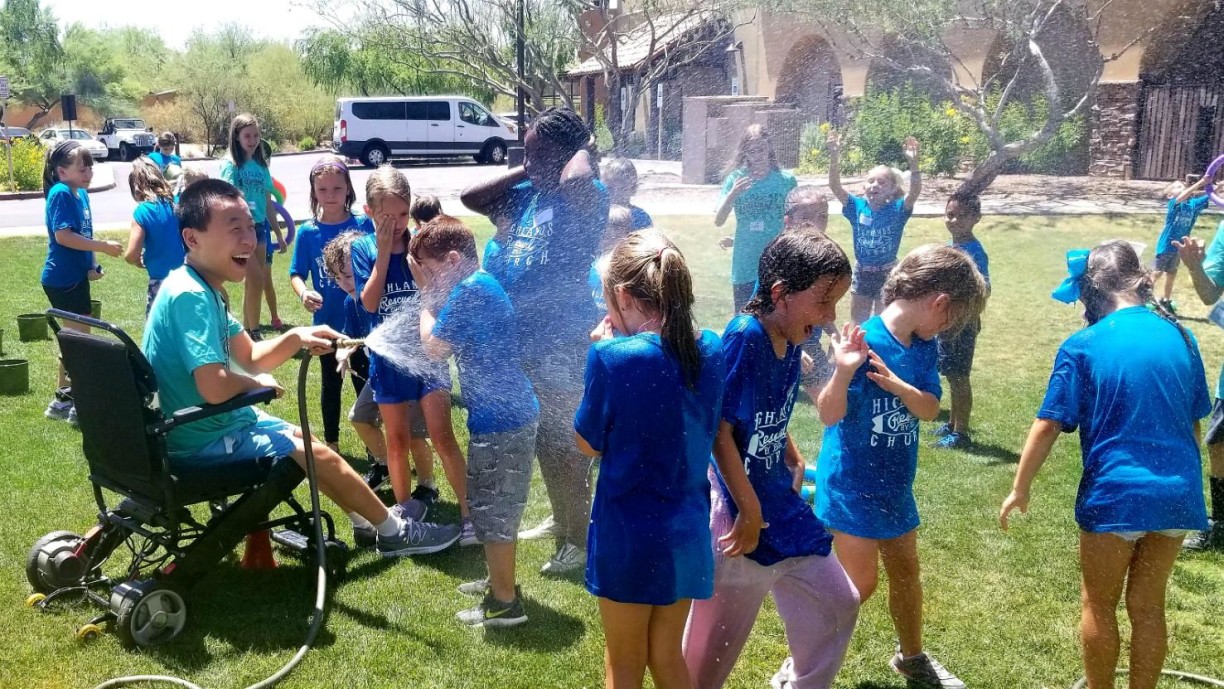 What would our son be doing in China at this moment if he were still there?  We can only imagine.  We do know he had been told over and over that there was no point to his life.  He would “never do anything at all”.

Today he is spraying kids with water during the games at VBX.  He beams when he talks about it.  He has a purpose. He’s needed.  He laughs and smiles and enjoys every second.

Johnny and Stephanie (another volunteer working in games)

The need for families to step up and open their homes to treasures like our Johnny is enormous.  But just one family in one treasure’s life can make a world of difference.  Look at him.  And there’s nothing like the joy that comes from serving others.

Our Johnny has a purpose.

2 thoughts on “Johnny-boy: You Have Incredible Worth and Purpose”