A few weeks ago I promised to share Ruby’s most miraculous accomplishment (forgive my tardiness!).  Autumn’s situation and with my little grands here who I am helping to care for, myriads of medical testing, many doctor appointments my already wild life has been revved up a bit more.

It’s Monday and honestly sometimes our weeks just needs a special reminder jolt of God’s miraculous handiwork to start the week off with praise on our lips and a banana-smile on our faces!!  I mean who hasn’t wondered out loud, “Why can’t weekend last all week?”  This home schooling mama sure has thought that more times than I can count!

So today, to start your week with a reminder of just how big our God is I share with joy this incredible moment which, by God’s grace, I was able to catch on video…cause we stand in awe of what God continues to do in our sweet miracle-Ruby’s life…

But first a speck of background…

Ruby maneuvers through our home with ease.  She doesn’t bang into walls, unless she wants to and sometimes she does – full speed, cause she laughs and thinks it’s funny.  Ruby gets to where she wants without any effort in fact there are many days I have to go looking for her cause she’s wheeled off (the same as “wandered off” except she’s on wheels – ha!).  When I was in Africa in the spring leading an IVO mission team to The Gem Foundation Dw told me that he suddenly couldn’t find Ruby.  He ran throughout the house looking for her and found her parked in front of our bathtub cause ya’ know, it was bath time!  And she was telling Daddy, “Dad! I’m helping you out – this is the time every day when mom gives me a bath! Let’s do this!”

So anyway, before we left on our summer trip Ruby had been playing with the handle on the front door.  She had actually managed to get it open!  I was shocked! We have a top latch to keep short people inside, but that particular day the latch had been left undone and I was stunned when she was able to turn the handle and pull the door open.  The relief was that her wheelchair was in the way and so even though she could get the door open some, she couldn’t pull it all the way.  The front door has a wall right beside it so it would take some special skill to get her wheelchair out of the way and the door open enough to get her chair out.  I mean it takes my effort to get it open and her out because of the wall beside it.  If the front door was in the middle of a room, the door could easily be swung open and out of the way, but the way it is presents it’s challenges.

I told Dw in the early summer how Ruby has been playing at the door and trying to get out – such determination!  We left on our trip and had a blast.

Now to the average person who sees Ruby I’m sure they would never believe that her wheels in her head are always turning!  She is one busy chica and she is not about to let her wheelchair, her multiloculated hydrocephalus or her cerebral palsy define her!  And I know where she gets her courage, her strength and her dogged determination from – our astoundingly faithful God!  There is not one single thread of doubt – our God wants the world to know that Ruby’s healing is ongoing!  Her life has value!  She is a blast too! 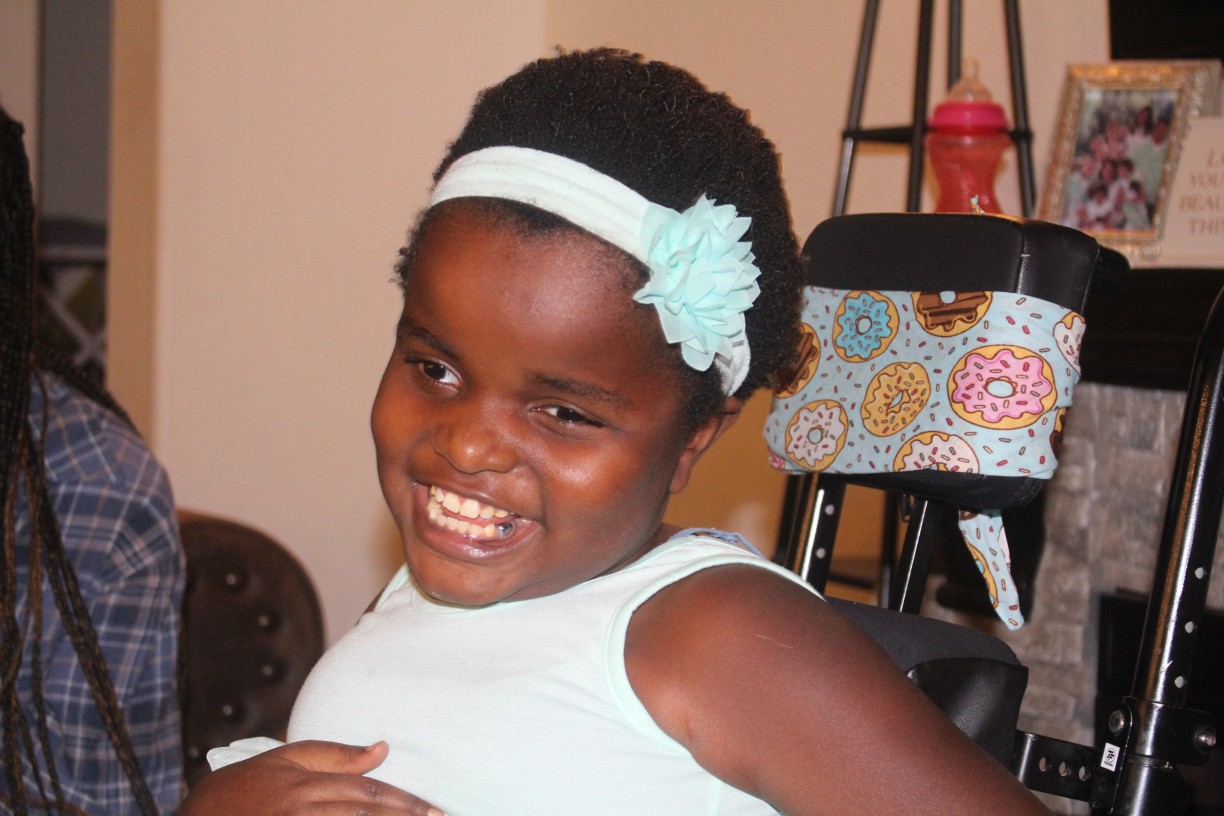 So get this!  The morning after we arrived home from our trip, the kids had gone outside to empty the car.  I was in the kitchen and noticed Ruby at the front door.  I made sure the door was shut although the latch was not on as the kids were outside making a pile of stuff to eventually carry in.

As they worked at emptying the car, Ruby was working at joining them!  Without much effort, since she had actually already accomplished that a few weeks before she had managed to open the door, move the door out of the way enough so she could get her wheelchair in position to head out to the kids!  She was able to push it hard enough to get it up on the thick, bristly door mat, up over the lip of the door and at the same time(!!!) open the handle of the screen.  WHAT??  My eyes were wide and I was laughing and giggling…Ruby was actually escaping on her own!  I swear, I think she was planning it the whole time we were gone.  Not kidding.

We live on a little hill on our street and so once out the door and down the wheelchair ramp it was all downhill from there!  I had grabbed my cell and was recording this monumental escape artist get out but my hand was close enough to grab her wheelchair as she bolted down the ramp, through the walkway and into the driveway…and although Elijah was shocked to see her wheeling out herself, he blocked her!

Happy Monday friends!  Our God is always at work around us!  He is healing the broken, restoring hope, ministering His strength, surprising us, moving mountains, performing miracles – all because He is astoundingly faithful!  And Ruby is living, breathing, moving, wheeling, escaping proof!  We praise His name!