While driving home the other day from a surgeon’s appointment Johnny, Elijah and I noticed a homeless man as we waited for the light near our home to turn green.  The kids and I talk often about homelessness and how we can help.  At times our family has driven around handing out ice cold bottles of water, granola bars and other things in an effort to bless each we encounter while attempting to be Jesus’ hands and feet.

This particular day though the conversation was profound.  Johnny spoke, “Mom, when I am older I want to work with the homeless people.”  “Really?”  I questioned.  “Yeah, I do,” he responded and then elaborated, “because mom, if I hadn’t come home to my family, I would be just like them.  I would be homeless too.”

Words aptly spoken from the depths of his 16-year-old once-orphaned heart and I could hardly see to drive the rest of the way home.

What really does happen to the orphans that age out in Ch*n@?  A couple of years ago I asked this very thing while speaking with a person who is very, very, very knowledgeable in Ch*n*se adoption and she responded, “We really don’t know.  They just kind of disappear.”  I feel sick just typing those words.  Boys just like my sons, girls like Jubilee – they just “disappear”???   Let that sink in for a few moments. 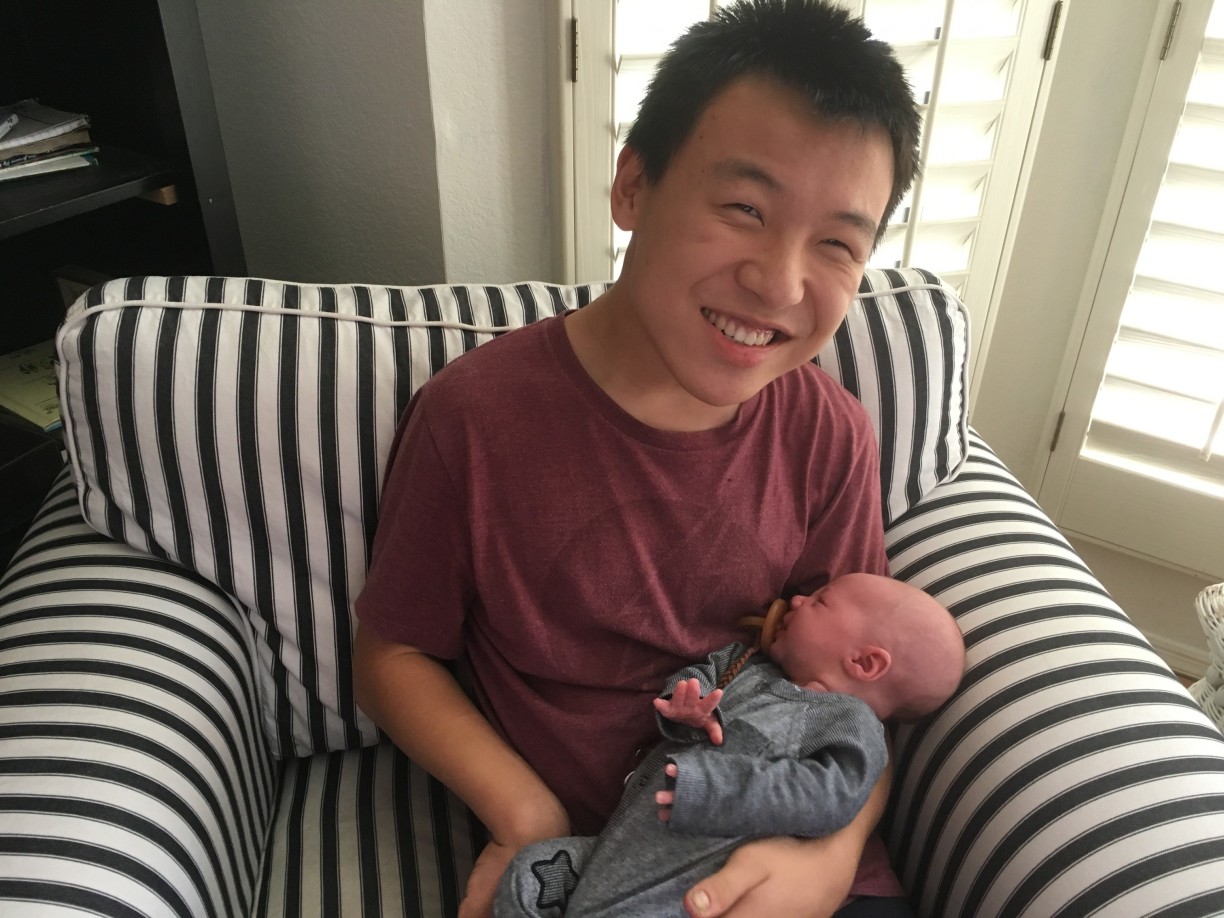 Uncle Johnny had never held a newborn until baby Winston.

Yes, our son gets it.  Johnny knows the bleak life an orphan faces daily and the hopeless future that awaits.  Johnny talks freely about orphanage life and the stark contrast to family life.  His stories are a constant reminder of what millions of orphans in orphanages face daily. Over the course of his near 14 years in an orphanage he had some wonderful, kindhearted workers.  But he also had some nasty, hate-filled ones who spewed venomous things at our son.  Some would taunt him with cruel words about his cerebral palsy telling him that no one would ever want him, that he was useless and that he would never have any friends.

Someone along life’s way had introduced our precious son to Jesus and Johnny had invited Christ into his heart and prayer became a vital part of his day-to-day existence.  John knew his future was impossible and believe it or not he prayed every single day for a family.  Every day!!  He prayed against all earthly possibilities knowing that there was not one thing he could do about it – except pray!

So John prayed.  Every single day he asked Jesus for a family. He tells me that he knew God was going to answer his prayers before he aged out in early May 2016.  He was confidant!! God was working in our son’s heart and the years he spent waiting for his forever family to come for him he had become a prayer warrior and a young man of great faith!!  No surprise our astoundingly faithful God was moving mountains and working miracles on behalf of our son!

Finally home for two-and-a-half years Johnny’s heart is healing.  He’s learning that his future is bright, that people do want to be his friend and that God is going to use him in powerful ways, despite his broken body! 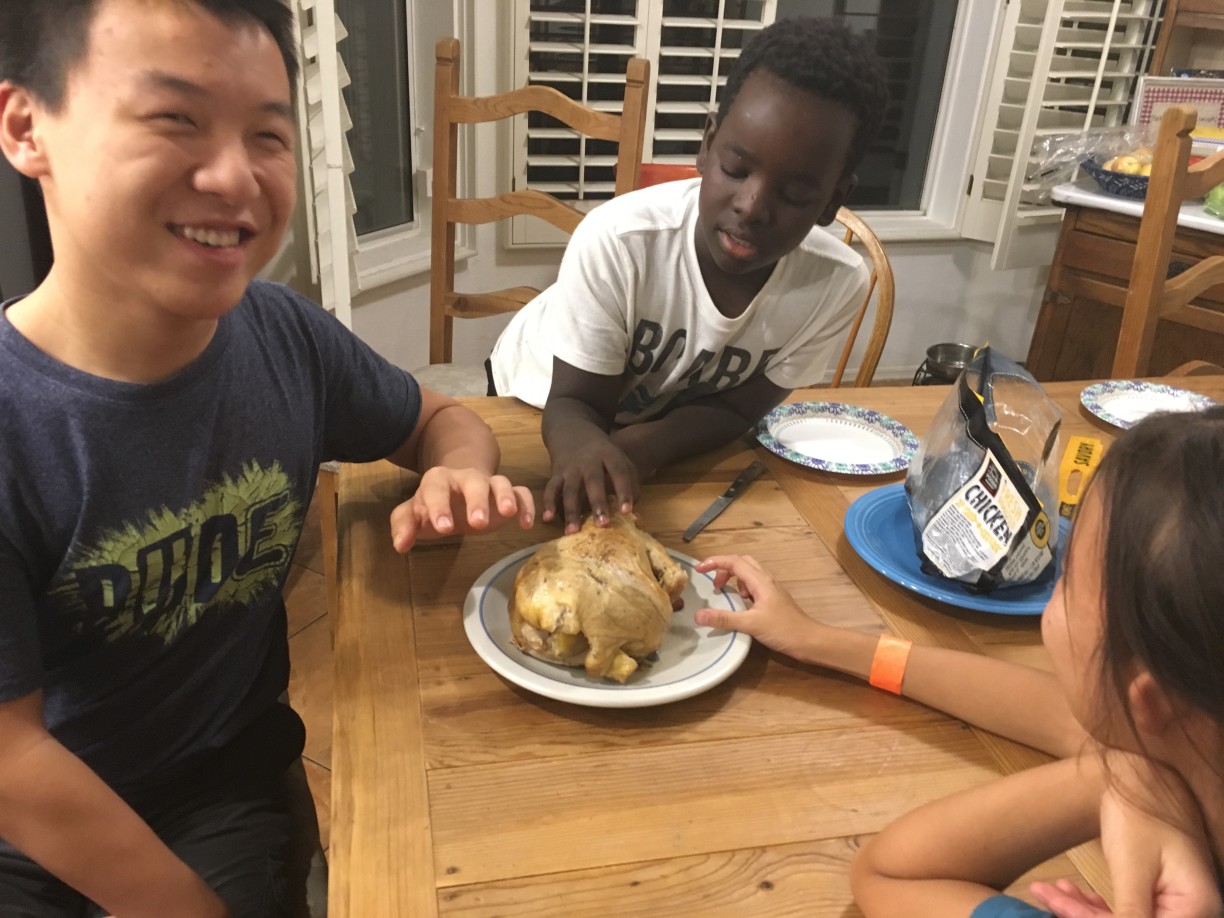 “Dissecting” a cooked chicken for Science with a couple of his sibs.

Saturday was National Cerebral Palsy Day.  It is a time to celebrate, honor and advocate for those with Cerebral Palsy.  The fact for our family is that our John had some of the most difficult circumstances prior to coming home, yet he is a beautiful blessing to us.  His body may be broken but his life adds immeasurable and incredible value to our family.

And at this very moment there are millions of C%in*se orphans waiting for a family.  Can we even begin to grasp the reality of kids like John just “disappearing”? Kids with incredible, God-given talent – kids who would grow up and work with the homeless in your community or teach young ones the value of those with Cerebral Palsy or other needs or author life-changing books about the beauty of adoption or change the world in some other way!

Would you pray with me for all those waiting?  Would you be willing to pray that God would break your heart for the things that break His? Because there is no doubt that the orphan crisis breaks His heart.  He longs for every orphan to be set in families and you/your family or someone you know may just be the answer to someone’s prayers!

3 thoughts on ““They Just Kinda’ Disappear””