So, yesterday ol’ Mr. Benjamin woke up to find that this ‘other mother’ of his had taken the liberty to lobby for a sweet wife for him.

I told him that there are some times when it is better to ask forgiveness than permission.

He laughed and laughed.

What a great sport.

Here’s a little update since I have no doubt that just about 100% of the women out there in bloggyland are matchmakers at heart as well.  I mean, come on, who doesn’t love a great love story?? And I could only imagine that most of you were wondering just how many young ladies, their moms or someone else on their behalf had written a response.

I admit I kept giggling as many of the subjects said, “MomOfManyHarmony”….who knew attempts at matchmaking could be so stinkin’ fun?

There are 17 letters {so far} from precious bloggy friends waiting in my inbox.  If you haven’t sent one in and want to, it’s not too late.   I will be forwarding them on to him for him to read/see and from there it’s definitely in his ball park.

The first couple emails that arrived I did read and, no doubt, just like I had imagined there are some wonderful young women out there in bloggyland!  You guys are so sweet and beautiful!  Your faces display your love for Christ and my heart wants you all matched up and happily pursuing the dreams God has placed in your hearts with a man of God holding your heart and hand as he gently leads in the road of life.

I do have to say, there was a quite a bit of fun commotion over here at our home because of MomOfManyHarmony.com.  Benjamin’s siblings were enjoying all the fanfare on their brother’s behalf and our girls, including Autumn and Abigail were also getting a kick out of it, since all of Benjamin’s many siblings are buddies with our kids. 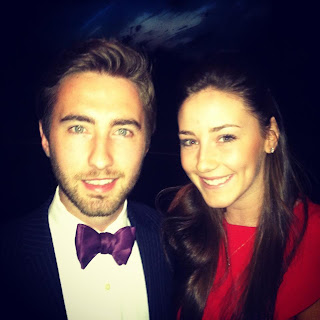 Benjamin with one of his younger sisters…
He flew home, surprising her with tickets to Les Miserables…
just because he loves her
{He was telling me how he searched and searched for a bow tie for the event,
because it just had to be a bow tie.}

I will be writing to Tyler and sharing what his mama did to his ol’ buddy.  Tyler will, no doubt, be shaking his head and saying, “Poor Benjamin”.  We have been friends since the boys were toddlers and have made many memories in our friendship even though many miles have separated us physically.  We have had some mighty fun stories to tell over the years and, no doubt, this one will be added to the collection.

Abigail told me last night that said she had tried to leave a comment, but it wouldn’t go through.  She told me it had said, “Dibs I’m the photographer.”

Autumn said, “He does know that Karl and I were matched up by you and Aunt Lisa, right?”

So there’s the update on Benjamin. And can I just say it is mighty hard to type Benjamin instead of his real name?  Aye-yi-yi.  I have had to read and re-read to make sure I haven’t blown it.

If anything further develops, you can be sure I will be letting you guys know as fast as my little fingers can type….Promise.

Today just seems to feel like a Memorial Box Monday kind of day…a simple story declaring the faithfulness of God.  So I’ll be back later.

In the meantime, I’m off to see if the web site “MomOfManyHarmony.com” is available.