Skip to content
Facebook Twitter Instagram
Search
Close
Since Dw has been gone to Africa,
I’ve not had much opportunity to get exercise.
For me, personally speaking, exercise helps me stay
pretty mellow.
If I feel myself getting stressed, exercise *always* helps.
{Besides spending time with the Lord.}
With Liberty being the oldest and Ruby’s seizures
really can’t go too far,
so instead I’ve managed while Dw is away,
to just ride around and around the blocks
surrounding our home.
Never more than 2 minutes from the house.
Having not ridden my bike for several days,
yesterday
I asked Liberty if she was okay with watching the kids so
I could ride for a bit.
Venturing out my only thought was,
“Wow, it’s still pretty warm.”
It was 7pm so it had to have cooled down from the
122 degrees it was supposed to have been.
Pedaling, pedaling and pedaling some more I began to
wonder what the temperature really was.
Paused for a second to do a search and found
it was still
115
degrees.
It made me laugh.
Guess I hadn’t realized, after living in the mountains of Colorado
where it cools right down in the evenings,
that it’s not quite the same here in the desert….
No wonder it was feeling a bit warm.
Saw a couple of my neighbors who were out hosing down
their driveways.  Actually asked one if I paid them a
dollar would they be willing to turn their hose on me for a minute.

We laughed.
At one point I saw something out of the corner of my eye.
{Sorry the picture is so blurry.
Riding by my phone did not cooperate well.} 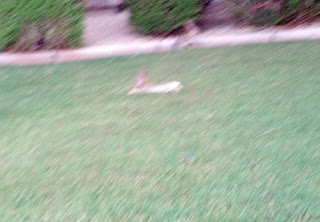 Two bunnies sprawled on a neighbors lawn.
Did a double take.
I actually thought they might have both succumbed to the heat.
Nope.
They were both just sprawled out perfectly flat.
Apparently it’s the way a bunny keeps cool.
Not to worry for Phoenicians –
it’s supposed to cool down by the end of week –

to a high of only