Miss Jubilee had surgery this morning.

This time it was an exploratory to figure out what
exactly seems to be going on.

Her surgeon is amazing and one of the kindest men
I’ve ever met in the medical field.

Which brings me to an interesting point and I merely share what happened to us, in an effort to encourage other moms in a similar situation, should anyone else need encouraging.

This morning I mentioned to the surgeon that I wanted to be able to go into the Operating Room with Jubilee to see her to sleep.  He said he didn’t have any problem with it, but that the Anesthesiologist {Mr. A} would have to give approval.

So when Mr. A came by to chat, we visited for a minute or so
and I mentioned that I wanted to go in with her to hold her till she went to sleep.

I need to mention that in days gone by I would have
shrunk back and allowed Mr. A to have his way.
However, I am becoming a better advocate for my kids
{finally – this silver hair is paying off!}.
I went on to mention that Jubilee’s past had been
rough and she was still learning to trust me/us, not to
mention her significant delays put her in a different
situation all together.

Anyway, a couple of minutes ensued of his sort of
lecturing me on how detrimental it was for me to be in
there until she was asleep.

I gently explained that I had been with others of mine when they ‘went to sleep’ in surgery and was really able to handle it without any emotion.

He wasn’t budging much {but neither was I} and then went on to mention some study that was done on kids whose parents take them back, etc.  I looked him in the eye and said, “A study is a study but this is not a study, this is my daughter.”
I mentioned that Jubilee was one of a dozen and most were adopted and so I understood probably better about trust issues among older adopted children and that this situation would be considered not part of a ‘average study’.

He then said that he had been doing this for 30 years {he was probably about 40ish, so he must have had a really early start at being an Anesthesiologist}.  *smile* 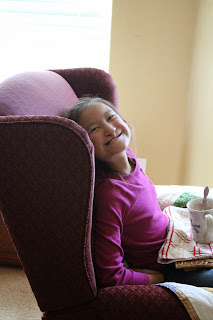 I did not back down because I am learning to advocate and also, I have gone back many times when the kids have had their surgeries.  In our family, it is the best way for our kids to go to surgery for our family.  And it’s okay if you are a medical professional and you feel otherwise.  It’s just what works best for us.

I appreciate, sincerely I do, all the thoughts of what’s considered best for my child, but really, I know them best.

He then relented and said it was okay.

She went to surgery kicking and screaming, but I was right there with her assuring her that it would be okay.  I held her as she took deep {screaming} breaths into the mask that put her to sleep.

I gently laid her down and walked out and they did their stuff.

I was thankful for the strength and grace God gave to see it through with this particular Anesthesiologist.  It really wasn’t a biggie to allow me in there.

I have been timid in the past to exert what’s in the best interests of my kids, however, I am slowly learning that it’s okay to advocate and defend them and protect them…even if someone else thinks otherwise.

After all, we are not “a study”…..at the end of the day, we are their mommy and daddy…and we are making the best decisions for them given all their personal situations, which is our God-given responsibility.

And for anyone chicken to advocate – you can do it too.
Persevere.

PS  Her eyes didn’t roll around in her head.