Often we are asked how we manage to provide for our large family and the many needs.   On paper, it clearly doesn’t make any sense.  But God loves the orphan and when we commit to caring for one, He uses any means He wants to meet each need.  Most often He uses others to be His hands and His feet.

Yesterday was a perfect example of our enormous God!!  It’s the greatest thrill to watch Him cause when He does it, it is so crazy-out-of-the-box, we stand back giggling in amazement at all He has done and who He has used.

So as it turns out our Vernon’s needs are greater than we had imagined.  We aren’t surprised, no not at all.  Paperwork is always quite vague.  When I met him in China, I knew we would need more specialized tools to help him function each day.

None of that is a big deal.  We love and adore our son and are so thankful he is ours.  As for his greater needs?  We are  his family and we are so thankful we get to be the ones to help him navigate life.

There is some major remodeling that will need to be done over the course of time and we are praying about how that will happen knowing the Lord is faithful and He always has an amazing plan!

And here’s a Memorial Box story fresh from yesterday!

Let me back up a bit…

If you remember I found an amazing wheelchair to take to China with Liberty and I.  As it turns out, it was merely a travel wheelchair and didn’t handle China well and after 2 weeks of use,it was ready for the dumpster, and we still had a week to go before heading home!  Aye-yi-yi.  We were thankful for it, because it was light weight, but my gracious, we needed another chair!!

Now get this, as the Lord would have it, sweet friends, Jackie and Kevin messaged Dw and I while we were still in China and said, “Hey, we have a wheelchair, any chance you would want it?? We can bring it to the airport!”  Well we hadn’t even told anyone that the travel wheelchair was falling apart already!  But our God was one “roll” ahead of us.

Jackie and Kevin brought it to the airport and the travel one went in the dumpster!

And little did we know that He was actually way, way, way ahead of us!!

After meeting Vern I knew that he would ultimately need an electric wheelchair.  Trying to figure that all out would just be too much for my little brain…but God was, again, rolling on ahead of our need!

About 3 weeks after arriving home, while using Jackie and Kevin’s chair,  (Can you believe it?  Not three years, not even three months!!) we spoke at our church’s Prescott campus sharing on the plight of the orphan and the work that our ministry International Voice of the Orphan does.   Afterwards, a new friend named Jason came to Dw and asked, “Could you use an electric wheelchair for Vern?”

This little lady had told Jason that she had tried to get rid of it, over and over and over.  She could not find anyone who could use it.  Obviously, God was saving it for our Vernon.

So yesterday, we brought Vernon outside telling him we had a surprise for him.  The pictures tell the rest of the story. 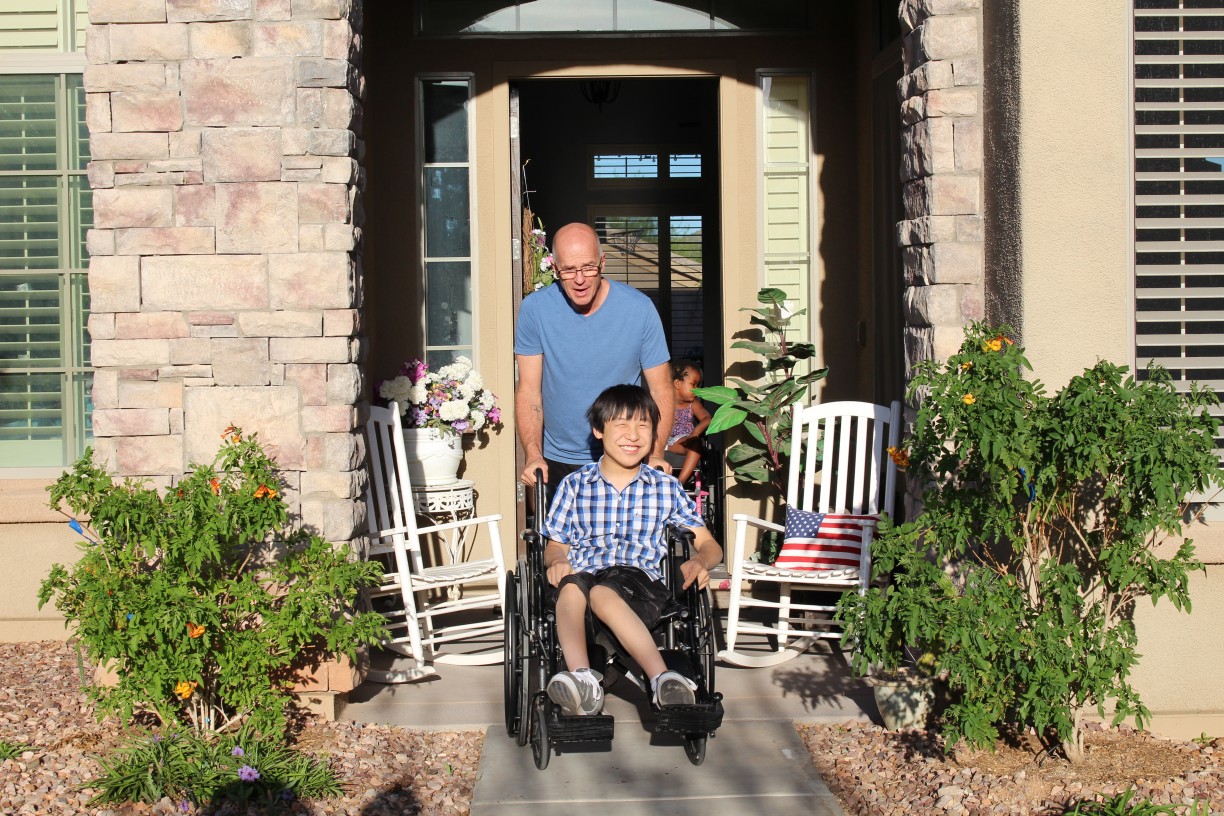 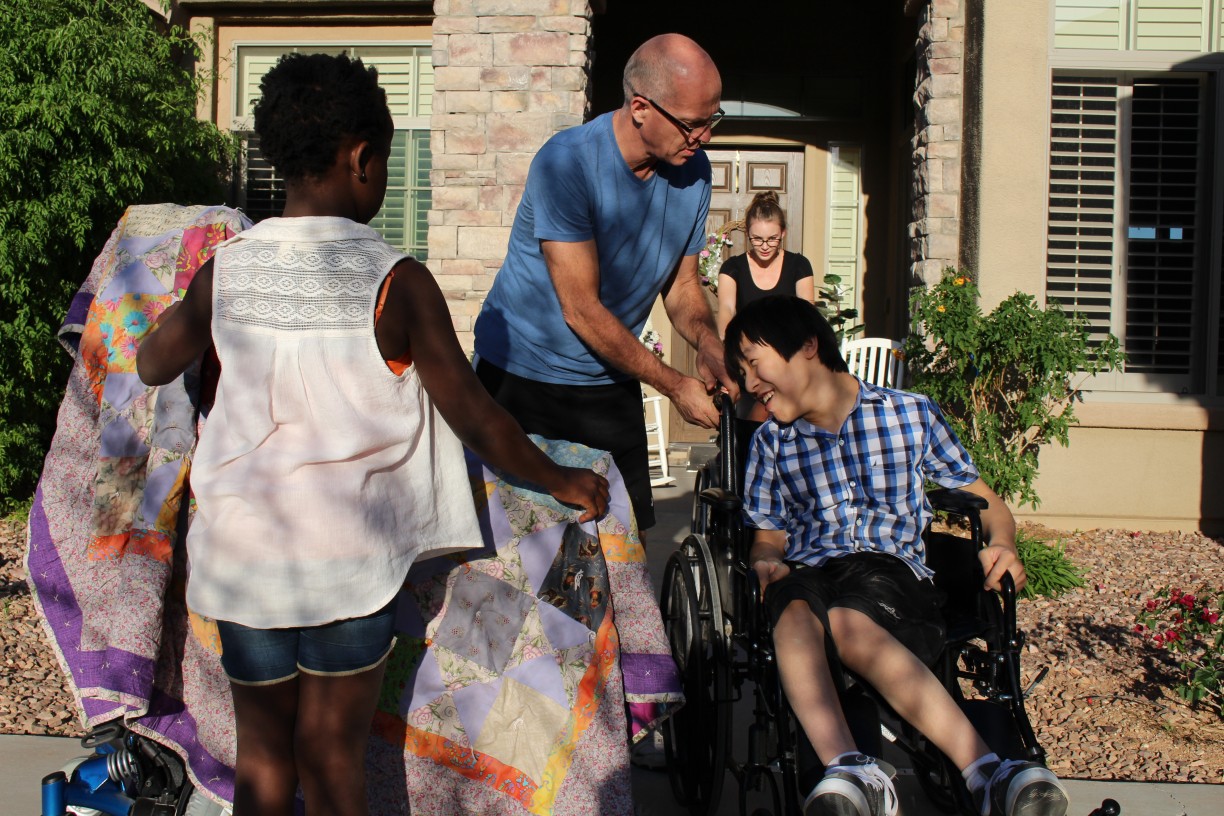 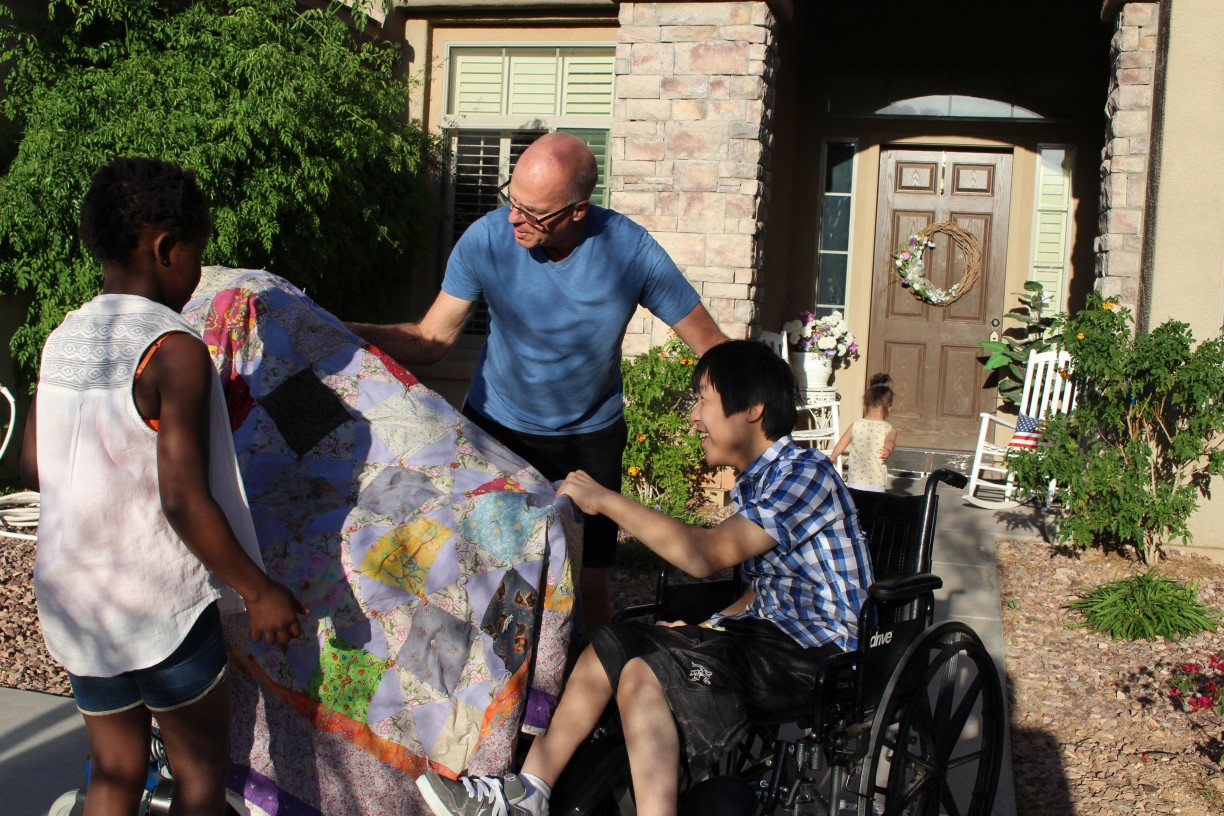 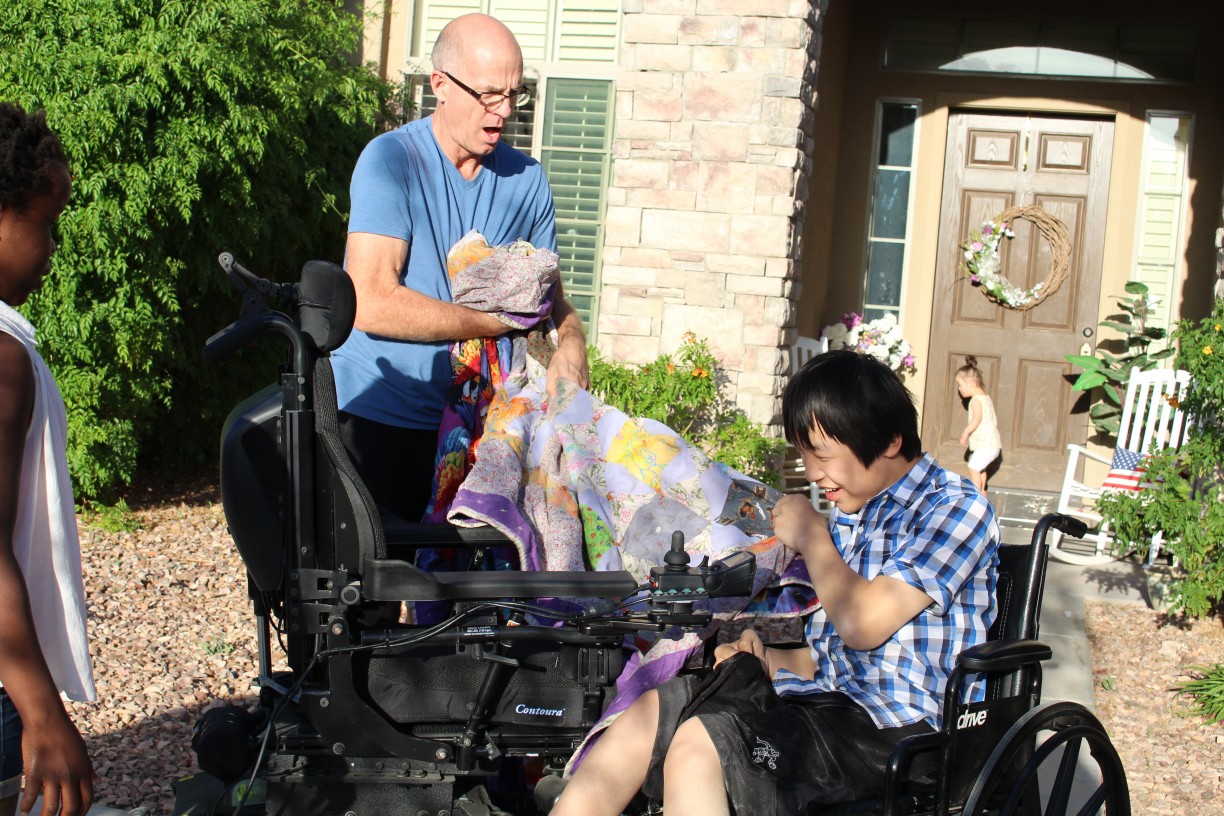 And a few of his fan club sibs were cheering him on from the sidelines: 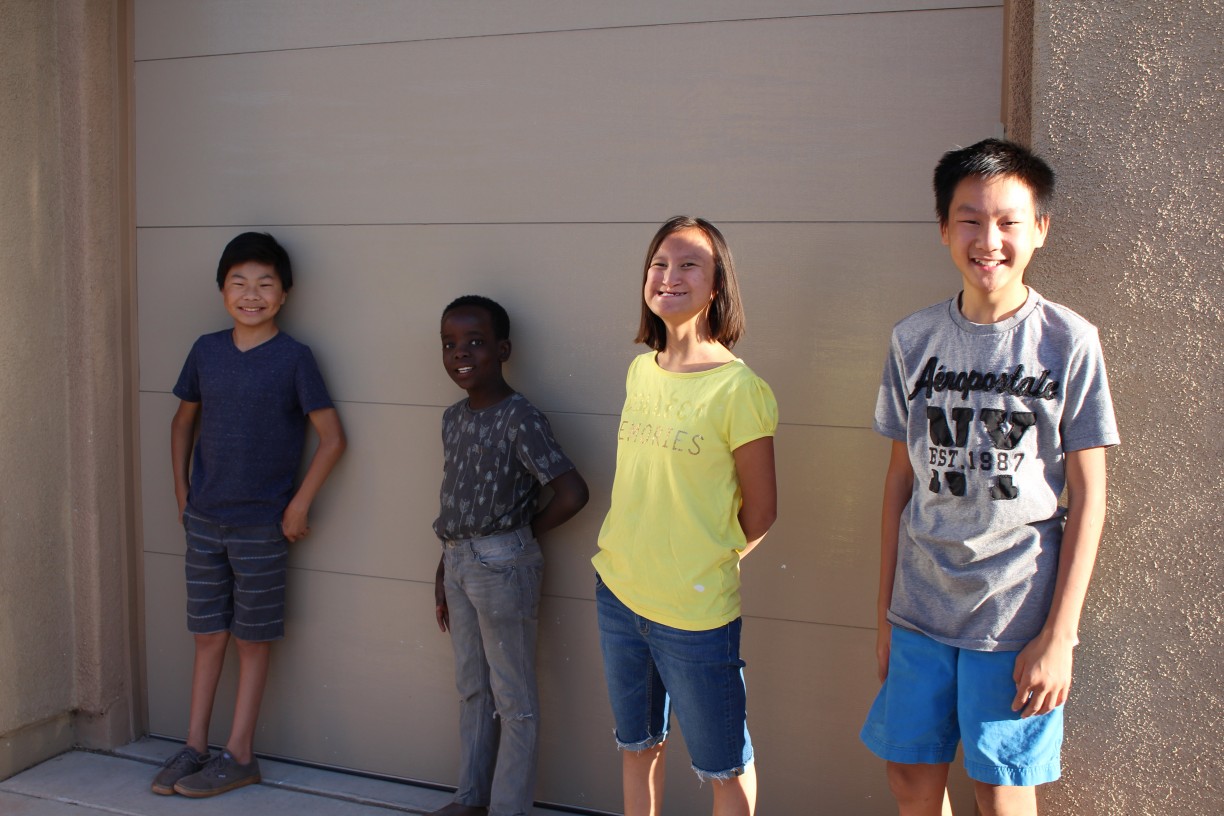 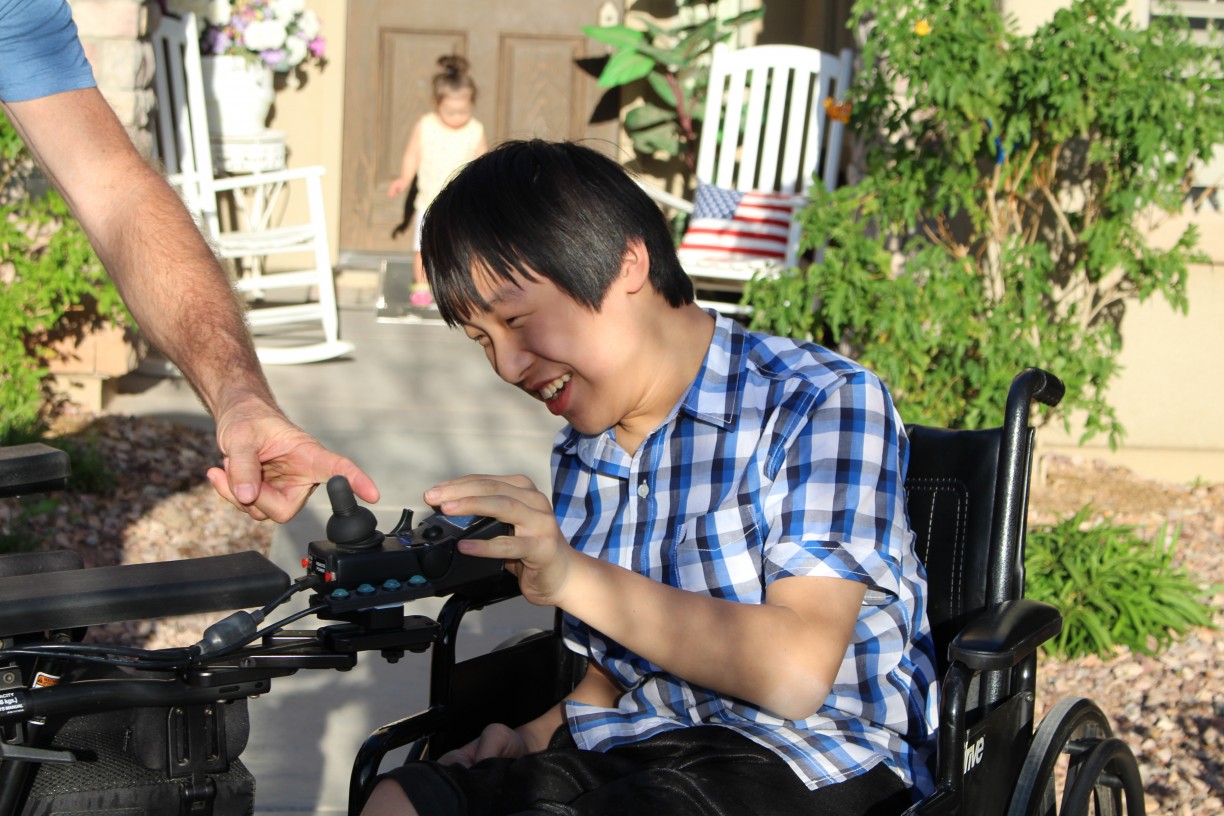 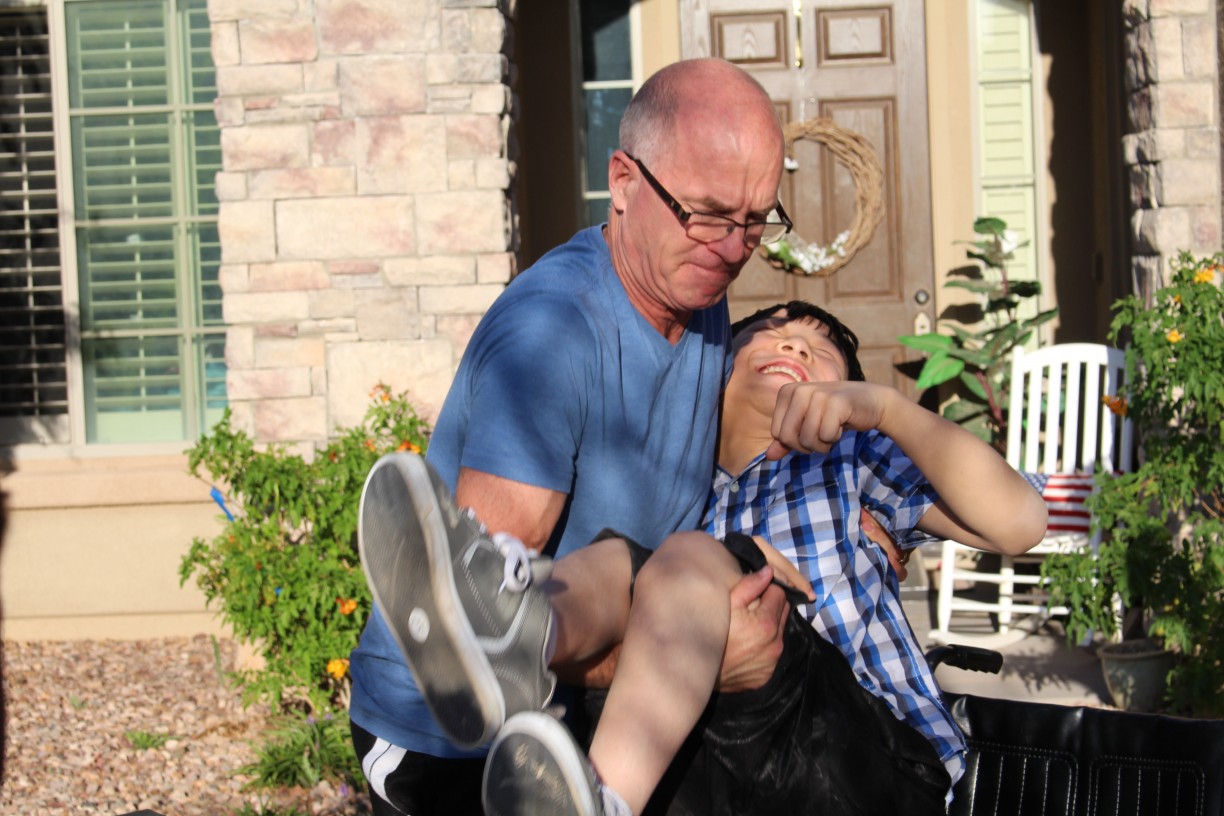 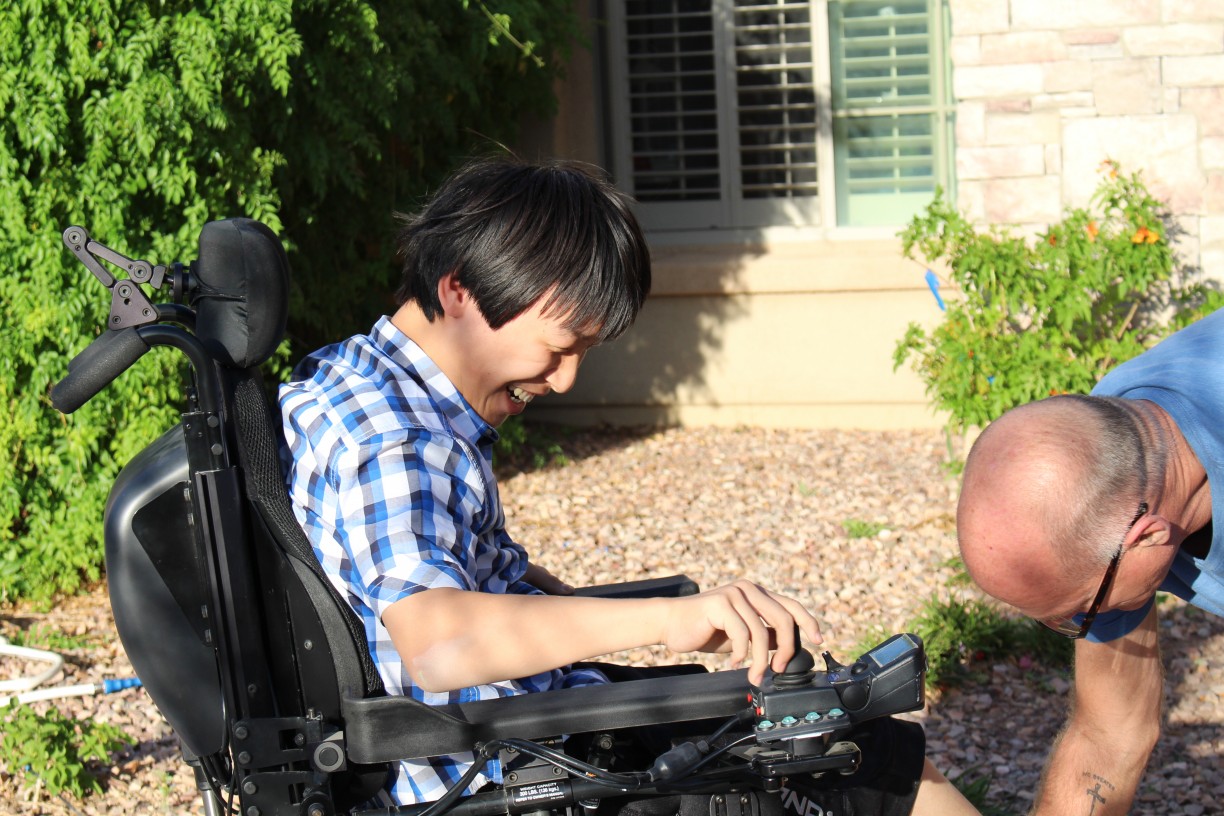 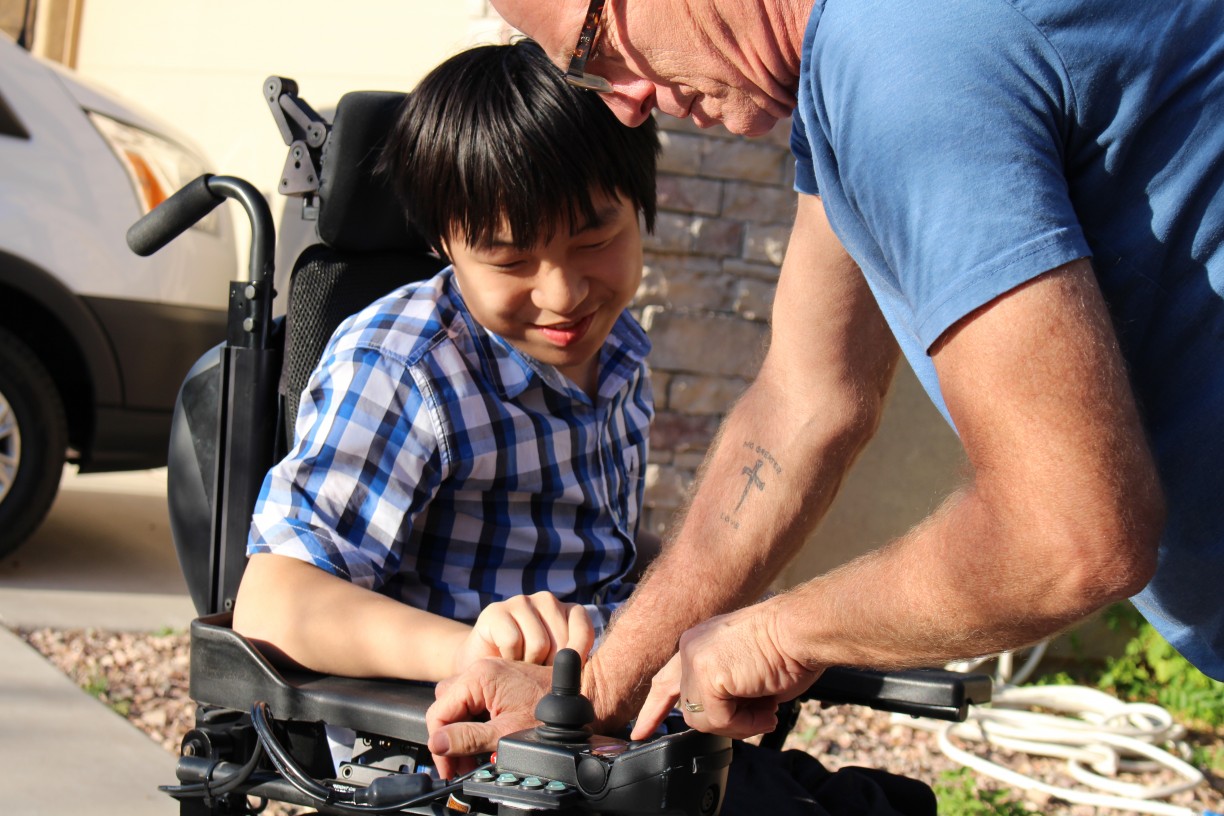 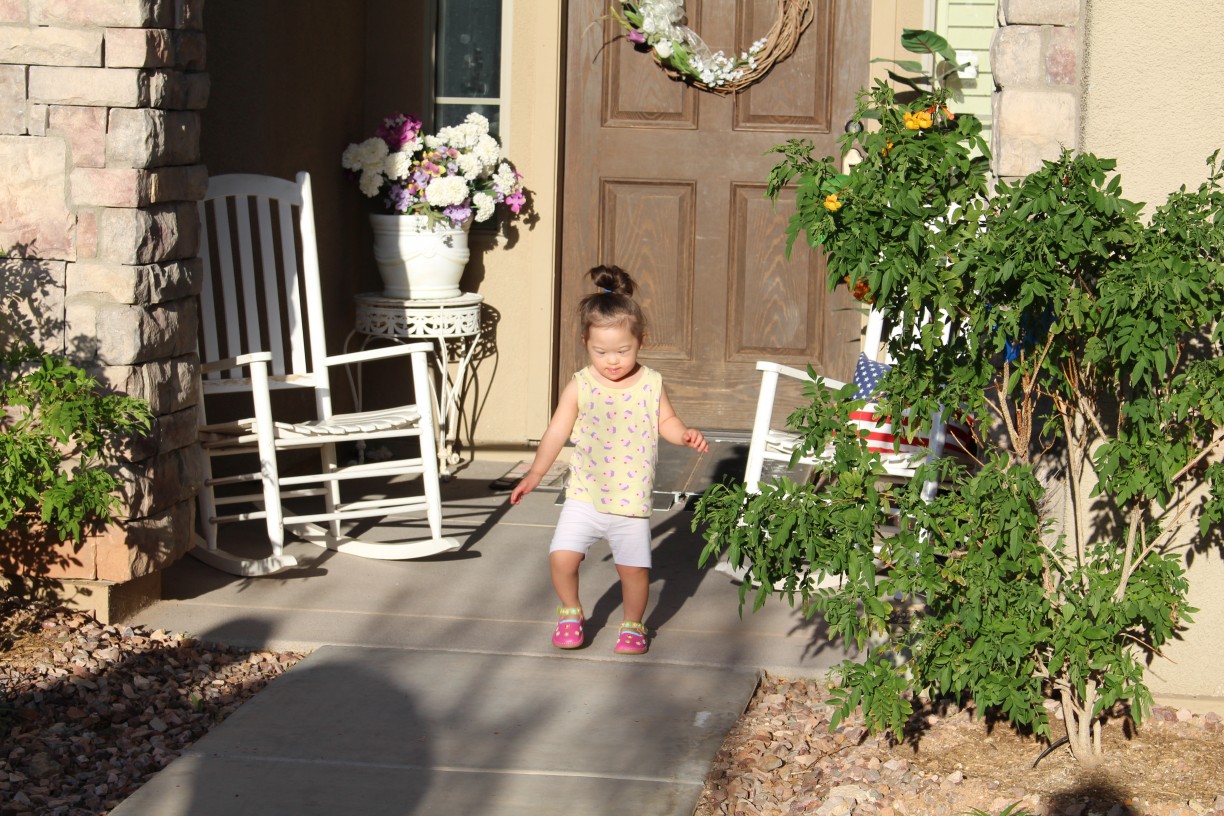 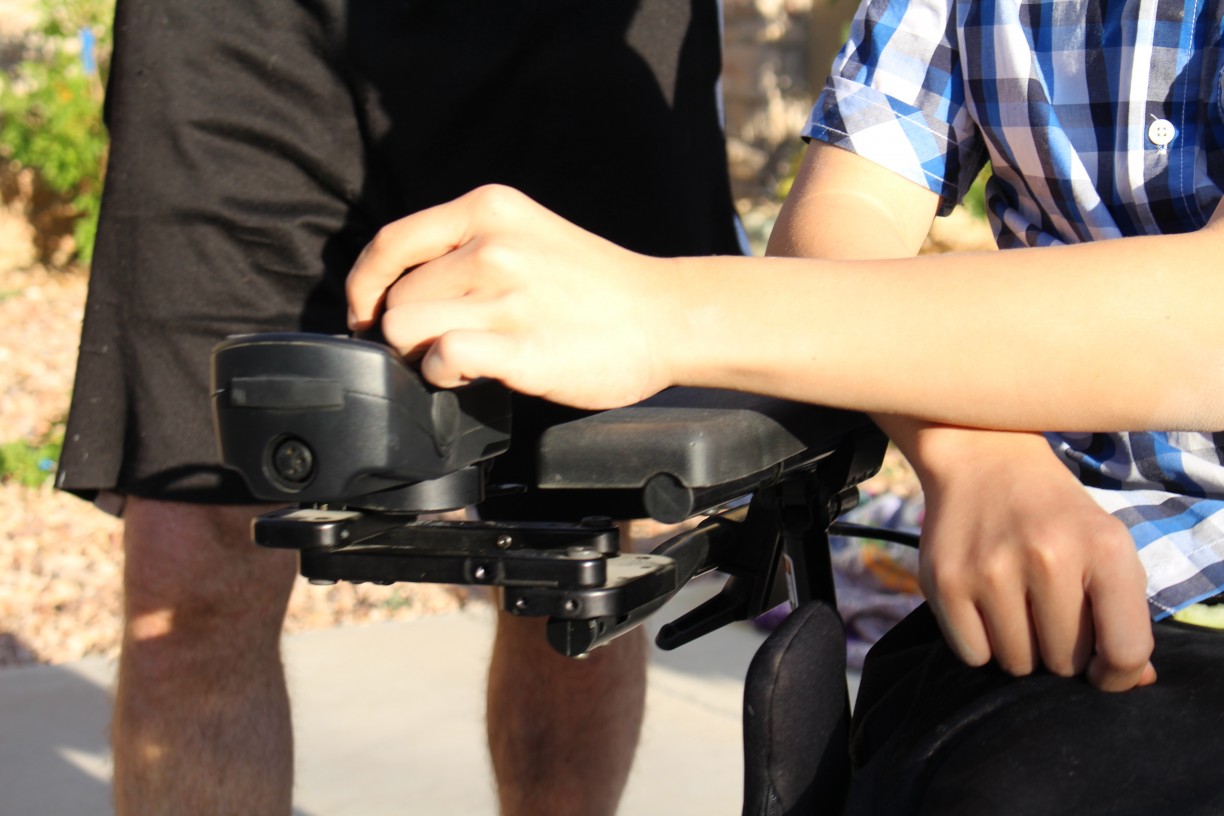 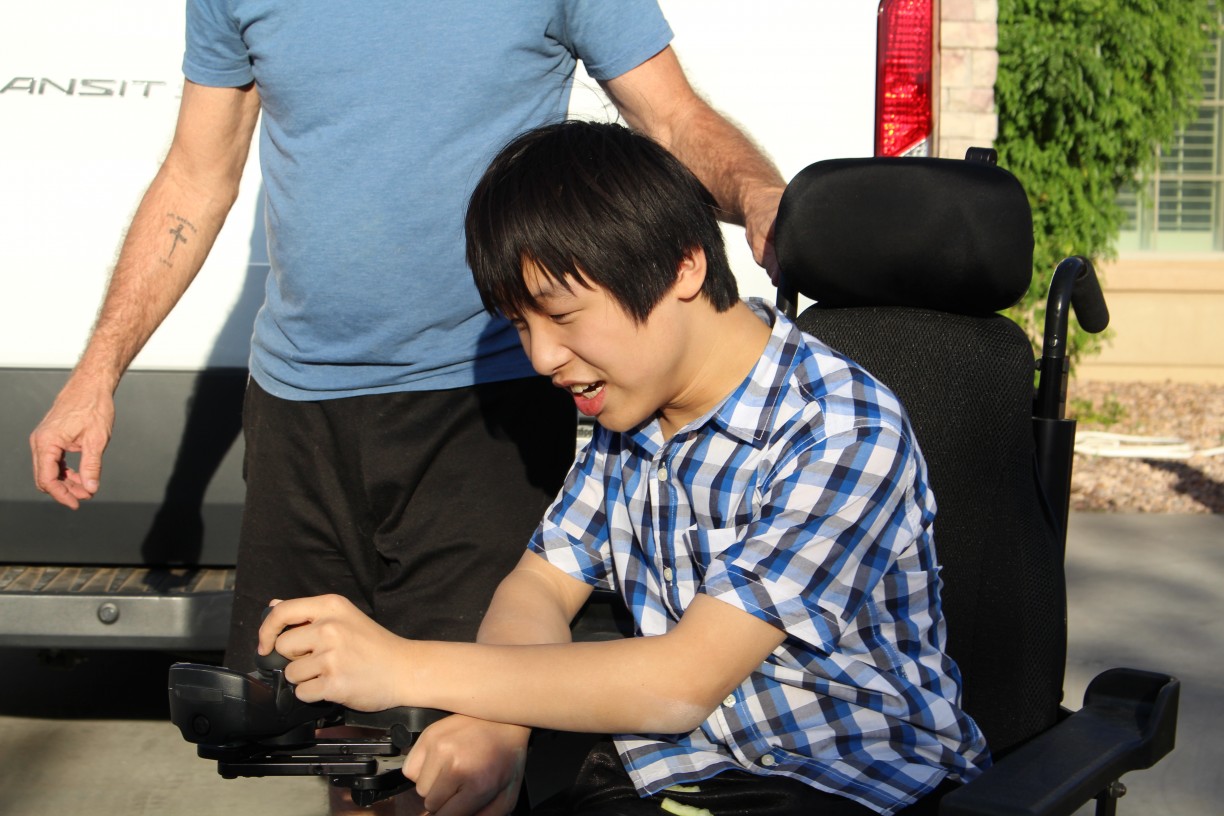 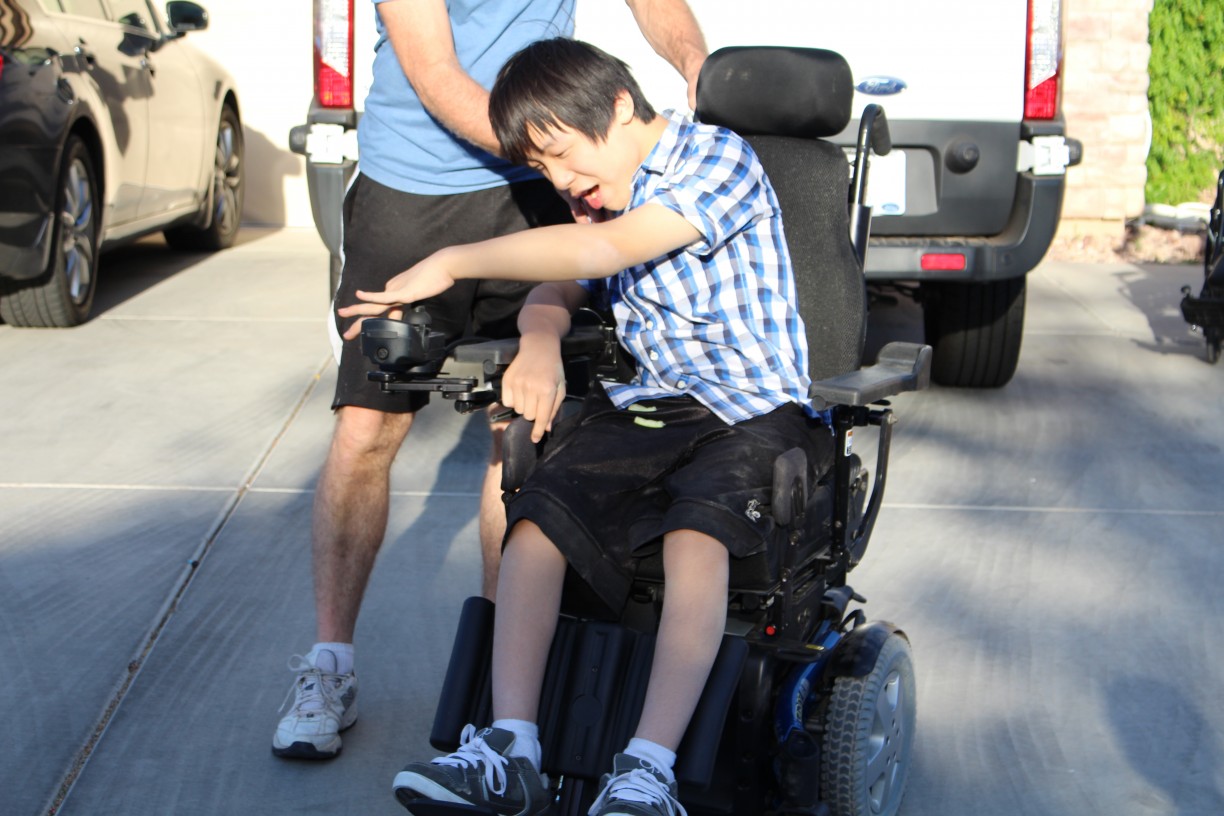 This time, the Lord used Jason, who knew a tiny little lady who lives several hours from Phoenix to gift our precious son a brand new wheelchair which she told Jason she paid $25,000 for!!   And to think because she was a little lady, it’s a smaller chair, which makes it even better-than-perfect for our son! 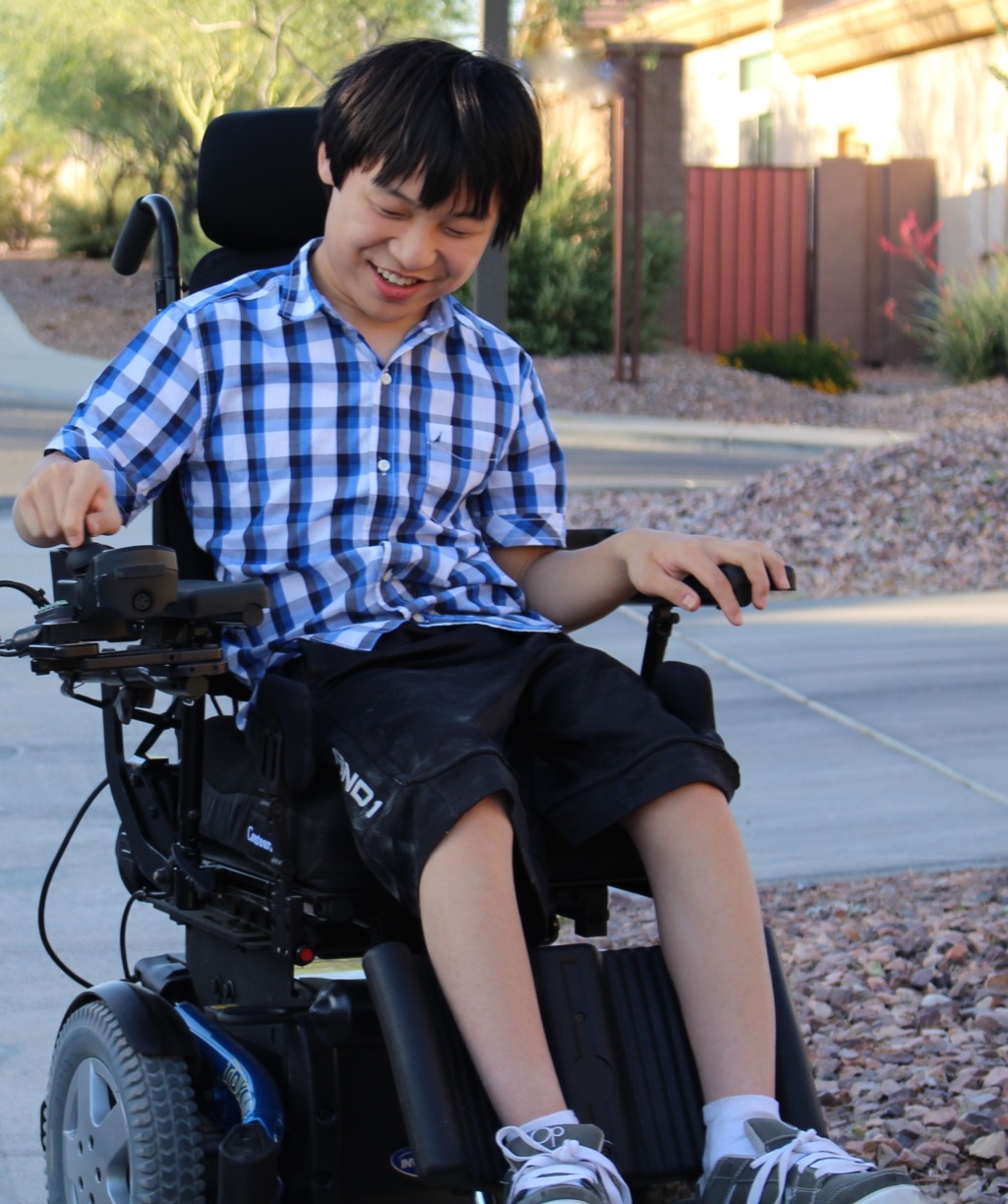 May this story serve as a reminder to all of us:  He is always at work around us, rolling out His plan for us…

To God be the Glory, Great Things He has Done. 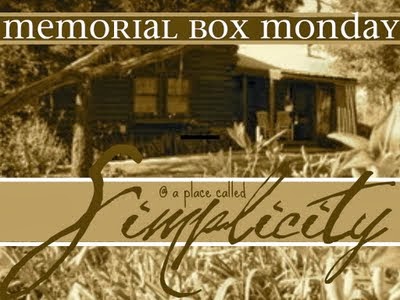 I encourage anyone I meet to begin a Memorial Box today.  He is always faithful and we must always remember!!  This is our Memorial Box! 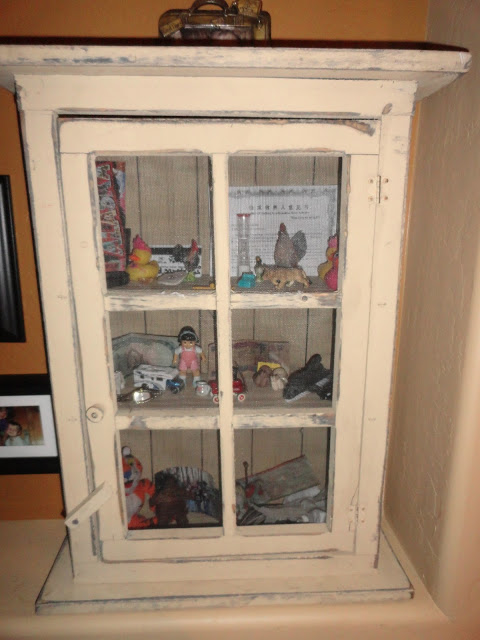 9 thoughts on “Rolling Ahead of Us”