Oh friends, I could not wait to get on my computer this morning to write!

On Saturday Graham had offered to come stay with the kids (because of Ruby’s seizures we want an adult when we go for extended periods of time).  He knew that Dw and I needed to talk about some pretty serious stuff.  Well as we were preparing to leave our cell phones got a Dust Storm Warning – which also included the information that visibility could go to zero in no time.  So we looked at the sky and saw the direction of the black clouds and knew we were going away from the storm heading to a little local spot nearby our home.  But as we left, I snapped a picture of the beautiful palms bent in the dust-laden ferocious wind storm.

Our hearts were heavy as Dw and I headed out Saturday.  We have been walking with some of our closest friends through one of the most difficult storms of their lives.  Our friends had told our kids and us about the situation and there were many tears for all of us.  Their situation profoundly affects our family and in response we immediately set aside a time of prayer and fasting as a family as well as praying throughout our days for a miracle for them.

In fact last week at our small group Bible study we were studying 2 Kings 6:13-20.  (Read it and you’ll see what I mean.)  We were talking about praying specifically and it really resonated with my soul about the situation we were walking through with our precious friends.  I felt strongly while at our small group that I needed to be praying specifically “XYZ” for our friend’s situation.  Although “X” would be good and “XY” would be pretty miraculous, I felt strongly that I needed to pray firmly and specifically for “XYZ”.

Mind you, I can’t manipulate God’s plan. None of us can.  But He clearly points out in scripture that “We have not because we ask not.”  He loves us so much He longs for us to pray specifically.  I mean, if my kids say I need clothes and I ran to the store to grab a t-shirt and shorts for each of them yet when I reached home, they questioned, “Where’s my bathing suit? I needed a bathing suit.”  I would respond, “Well you didn’t say that!”  Right?

Now the thing is friends, like I said, X would be incredible, XY would be astounding, however XYZ would be the miracle of the century like none other.  It would be downright dumbfounding, mind-boggling, wailing-in-praise beyond comprehension and clearly ONLY GOD.  No other way to attribute it but the work of ONLY our miracle-working God.

Obviously we weren’t the only ones praying.  Although it is a very personal story of theirs, they had told some family and close friends who they knew would pray with them as well.

Well yesterday was a day when our friends would be updated on their situation.  We knew what time they would have their update and we were praying and waiting to hear. Dw texted me well after the time we thought we would have an update asking if I had heard anything.  I told him I hadn’t but that I felt like vomiting because the update was long overdue. He texted back that he felt like vomiting as well.

About 20 minutes later my cell phone rang.  The kids and I saw the caller ID  and they stared knowing that this was “the call” as I scooped up my phone and headed into the bedroom for a bit of quiet.  I answered hesitantly, “Hey….”  I barely sat on the little love seat in our room as I heard the most miraculous words come tumbling out…

All of it!! He ALONE did it!  There is zero explanation but GOD.

Oh my word!! I started screaming so loud through tears of complete and utter joy that the kids heard and they came running, nearly tripping over each other…they opened the door, eyes wide, as a pack to see….they thought something horrible had happened.  Of course they knew who was on the phone and were already so concerned.  They stared questioningly until they could completely understand what I was saying as my words were all jumbled up and I really couldn’t stop shouting praises. Then they started shouting their own cries of praise at the news –

GOD DID THE COMPLETELY MIRACULOUS XYZ.

What man said was IMPOSSIBLE our mighty GOD spoke the words and it was DONE.  DONE.  XYZ was done by our miraculous God.  We will never forget and we will never stop praising Him!

Now I know that the reality is that many of you are in the midst of some horrific storms of your own.  Things you never saw coming (just like our friends), situations you wouldn’t have asked for, devastating news, horrific loss and no doubt, you’re brokenhearted.  But I have news – God is still in the miracle business!  His love for you never ceases, and no, He is NOT “fresh out of miracles”.

And I also know it’s tempting to only ask for X or just XY because they both would be miracles given the current horrible situation…but just like Elijah in his prayers in 2 Kings 6, I urge you to ask God for specifics.  Pray and ask Him for your own  XYandZ, He is more than able.  He is the God who loves you so very much and He longs for you to understand and grasp just how much He loves.  He longs to move in the miraculous for you!

What miracle are you needing?  What are you asking our gracious God for?  Don’t stop praying.  Don’t give up.  He is more than able to do abundantly above all we could ask or think.

Later on Saturday we enjoyed a brilliant rainbow after the dust storm…and friends, this rainbow was literally prophetic – God heard our prayers and He answered and we will never, ever forget…when experts said it was impossible, God said, “Oh really? Watch this!” 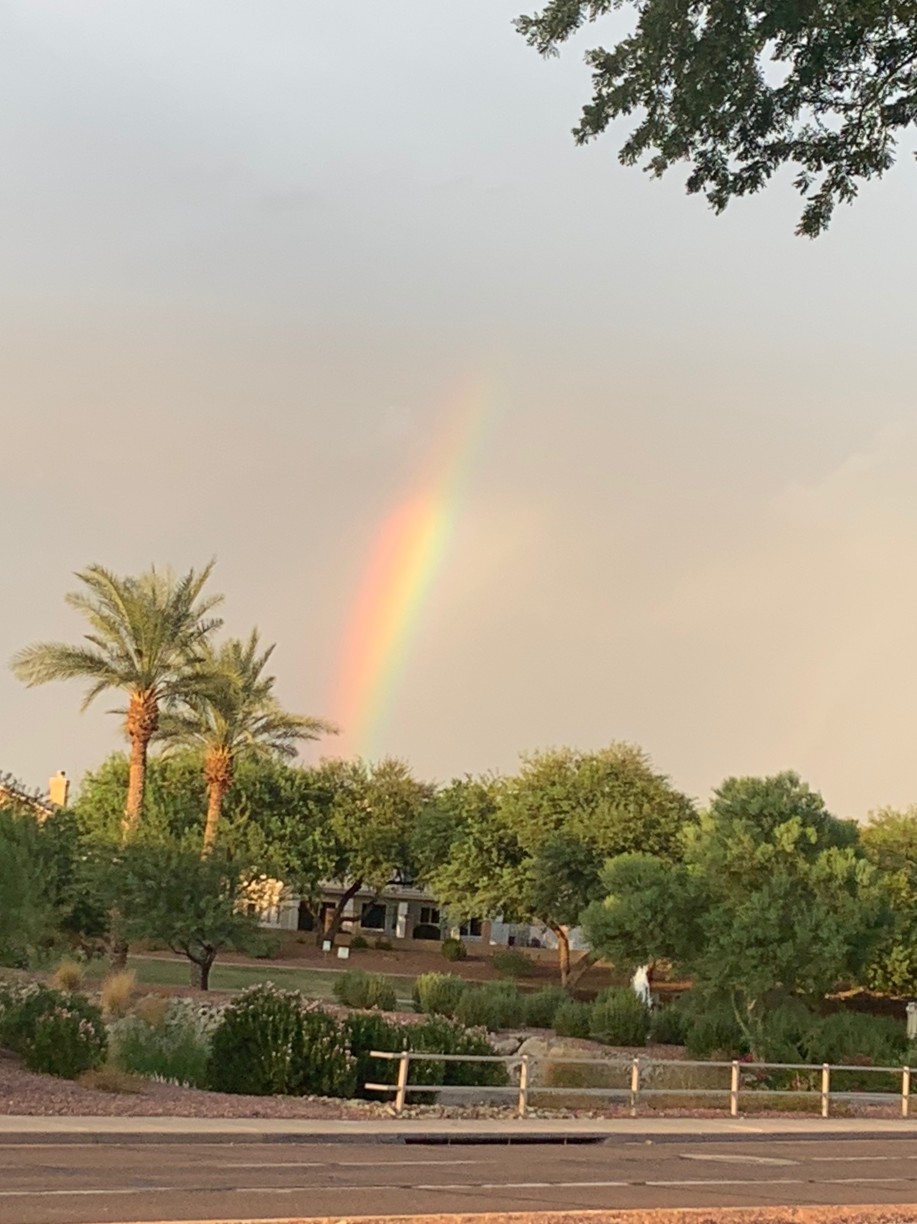 7 thoughts on “When They Heard the Screaming…”