Skip to content
Facebook Twitter Instagram
Search
Close
Finally!! It drives me buggy not having access to a computer, so I am learning patience (again!) with each step of this journey….
I have to tell you all, I have gotten such a kick out of Dw posting to my blog. He is getting so into it is almost scary. Let’s just say he hasn’t always understood my love for my bloggy friends and their support. He has hassled me (sweetly) from time to time and so have the kids! I just think God has such a sense of humor how this has all unfolded.
I had no idea that he was going to ask you guys to pray for me while I was sleeping just before getting up and going to court. No idea at all. When I awoke I had to hurry
to pack the room and get 9 pieces of luggage moved (we brought lots of stuff to give away that we have not been able to do until this court stuff was done). Anyway, Dw phoned to see how I had slept. At that point he read to me what he had posted and then he started reading many of your precious comments to me over the phone. He was bawling his eyes out and I was crying….they were so encouraging, uplifting and compassionate….we have been so humbled by them all…you guys so totally rock!!
I just somehow have this strong suspicion that Almighty God just gets such a stinkin’ kick out of the body being the body – lovin’, prayin’ and supporting each other that that is probably one of the utmost reasons we face difficulties. I think the Lord says, “Hmmmm, gonna’ act like you have it all together? Okay, I’ll allow the screws to tighten a bit more!” Before long we are screaming, “Okay! Okay!!! I will ask for prayer, I will make myself vulnerable! I will let you know that I am human and struggle with fear or worry” ….and He just loves that!! No doubt!!
As I started to say, although I had no idea that he had asked for prayer, I awoke with such peace yesteday morning. I thought, “WOW! God you are so good!” I had only slept about four hours and when I awoke I just wanted to bathe my mind in His word and spend some time in prayer. There is no doubt that you guys had been praying – thank you so much!! How faithful He is to hear the prayers of His people and move!
While waiting for the Judge the attorney’s assistant, Rebecca, said, “Don’t be surprised if she says she’s not ready and you need to come back in a few days.” Hmmm, that wasn’t all too cheery sounding to me. We waited and waited and waited some more. A marching band randomly walked down the street. No one seemed to have a clue why,
but they were fun to listen to.
Eventually the court door opened and bunch of people went in. She was obviously going to hand out all kinds of decisions. BUT she started with us!! =) She had an extremely heavy accent and spoke very quietly and even though I was only about 8 feet from her I was straining to hear her. She handed out the decision first for Elijah. I thought, “But he was supposed to be at 2:30?” At the end of her statement about Elijah she said she felt it was in his best interest to be in our custody. OH YIPPEE JESUS!! She glanced up at me and I said softly, “Thank you Your Lordship” (That’s what they call them instead of “your honor”.) She nodded. Then she went into reading Elizabeth’s. I have to say, I had such peace – because of your prayers! When she finished with Elizabeth’s I could hardly wait to run out of the somber room and squeal YIPPEEE JESUS!! And yes, I lifted my hands to heaven and started praising. Hey, multiple times a day the Muslim mosque screams stuff about “Allah and Africa” for the entire city to hear….so me lifting my hands and praising the ONLY true God – was definitely more than appropriate!
We needed something to celebrate so Tony took us to a place that had REAL coffee (and absolutely delightful chocolate cookies)- – – – ahhhh – talk about celebrating – it was so yummy!! Our oldest Abigail Skyped me with her hubby Ryan. I asked her if she had seen the pictures of the babies on my blog?? She said, “Mommy, I have been refreshing the page about every 10 minutes!” Sweet big sister she, too, is smitten! I could tell by their voices that they were just as elated as me. Abby told me that if the courts had said, “no” to either
she and RyRy were going to take the other.
*tears welling* -Ah yes, we family do stick together!!
kids thought I was smiling so much at the coffee placethat there should be a picture (told ya’ my face might just freeze like this!) 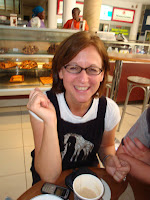 telling Elijah Muller that I really am going to be his mama!! 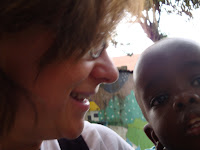 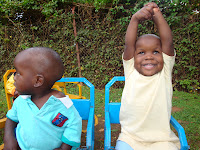 Elizabeth Mercy – our precious miracle baby girl….(I always wanted a thumbsucker – how cute is that?? – with FINALLY 9 kids in the bunch – its about time I got one!!!!)… 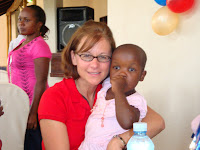 Even the workers have been commenting…..there is NO DOUBT that Elijah and Elizabeth know that I am their mama…they pretty much ignore everyone else – they only want me. I snuck in just after 7am this morning and I was looking for Elijah. They were giving baths and there were dozens of little brown bodies in the dimly lit room, and all of a sudden there were little arms wrapped around my legs – he had found me!! =) I scooped him up and soon Elizabeth was wrapped around my legs…….I have been telling them both “I love you!” and she finally said, “I love you!” back to me….she has such a precious little voice. Elijah is saying several English words and today at the party for the Baby Orphanage that was hosted by British Airways and the Sheraton Hotel he saw some balloons and immediately said, “alloons”…I was pretty impressed!! By the way, Babe, we need “alloons” in the house when we get there – he will be so tickled!! There are so many things I want to tell all of you….I am going to try to get someone to escort us back from the computer down to the orphanage later tonight. I have taken several pictures of kids here at the baby home….many, many, many need homes and I am praying over them that God would send families that love Jesus to take them. I am praying with furor, so brace yourself!! =) Infact, last night I only slept again about four hours and then was awake. I was praying for many of you by name. I was praying for the needs I know of: Gracie’s healing, Sydney’s healing, Phoebe being set free, “Grace’s” adoption, Rett’s twins (and future kids – hint-hint), etc., etc., and I was praying that some of you would come to Uganda with Dw and find your treasures. Anyway, I have to run down and see my sweet babies and help them eat dinner and then bathe them and help get all the other little ones ready for bed. Much love to all of you from Uganda, Africa….xo

20 thoughts on “Mountainous Miracles – the Judge rules YES to both – at the same hearing!! Yippee Jesus!!”