Skip to content
Facebook Twitter Instagram
Search
Close
Several people have asked how things are going and how Elizabeth and Elijah are settling in.
All things considered they are doing well, and yes, today is the third day and it was so much better than the first day or two.
There are several things that have been noteworthy (for lack of a better word). They are absolutely terrified of our two dogs. Not just a bit scared, but terrified. We have two dogs, Lucy (black lab) and Nelly (Schnauzer)…when they “met” them both Elijah and Elizabeth literally scrambled almost to my shoulders. If it wasn’t so sad to see them so terrified it would have made anyone laugh. They scrambled in almost one second flat. The cats we have are barn cats, but they do come and look in our back door several times a day. They are also terrified of them.
Actually I love stuffed animals….especially Boyd Bears -all dressed up cute and lookin’ like little people. Well I took two of the sweetest little (and I do mean little) bears to Africa to give to my new babies. I could just picture them snuggling with them and loving on them. After all, I love, love, love bears – who wouldn’t. So imagine my shock when I gave them to them and they cried in anguish and turned away – literally quivering. Okay, maybe not everyone loves Boyd’s bears. I had to quick put them away. You have to understand these were not dogs that I shook at them, but little Boyd bears with over-alls on and a dress and hat on the other – and all I did was reach them toward them. I ended up giving them to Jess and asking her to take them to the slums and give them to someone.
So I should have had a bit of warning from the stuffed animals that our dogs and cats would not be hit. And then there is the picture book with the little patches of dog “fur” and horse “hair” and sheep “wool” and duck “feathers”. I love that little book. But they cower and refuse to touch the little patch of fake whatever. I guess you could say we have a way to go before they are begging for a dog of their own for Christmas.
Yesterday we saw many more smiles. Church went well. Each service Dw had me come forward and we stood and introduced them both to all our sweet family. Both services Elizabeth waved to everyone….which of course brought an instant “Awwww” from the crowd.
After we went to precious friends, Laura and Dane’s for dinner after church. The kind of friends where we just hang out and laugh and eat way too much. Elijah and Elizabeth did awesome. They played and smiled and even ran around a bit.
Laura had a present for each of them. Which reminds me that we gave them a present a friend, Kim, had brought over the other day. They looked at it. Our guess is that they had never seen a present before. We showed them how to open it. Still nothing. It wasn’t just being polite, they had absolutely no clue what to do with it. Here’s Elijah wearing one of the hats Kim made for my kids….(they are so stinkin’ cute)… 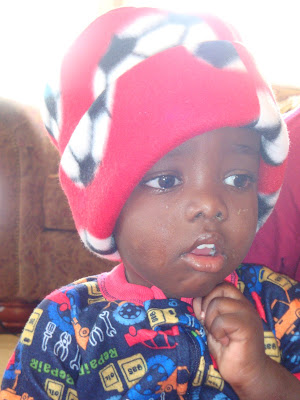 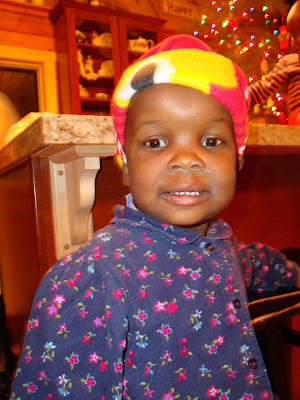 Yesterday at Laura’s, again, they just stared at their wrapped gift. We finally started opening it for them and they got curious and eventually helped with opening it a bit. (Pictures to follow)
We are also guessing that they have never seen a mirror before and Elizabeth loved looking in it. She kept saying, “Mama – look and see! Look and see, Mama!” Sweet baby girl!
They love Cheerios! Woo-hoo!! They have eaten almost anything we put in front of them. They are willingly drinking lots of water. Living at 7400′ we have to continually drink lots of water, as altitude sickness is for real. At the orphanage, honest to goodness, we never, ever saw them drink any water. Liquidy “porridge” is part of breakfast and dinner (seems to be made with milk mostly, very thick) and they drink that. Twice while there we saw them each get a little glass of some sort of juice. They had glasses of milk in their little pre-school class they went to, in the ‘classroom’ behind the orphanage’s main building. 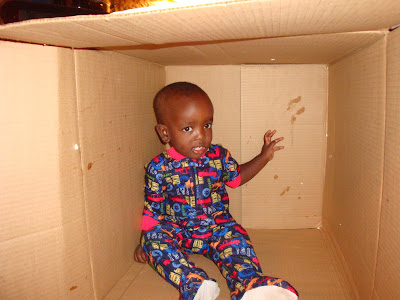