Johnny-boy’s “shortened ” surgery yesterday was supposed to take four hours but instead took six hours. This surgery was performed in an attempt to have his feet stay in a secure position so he can “walk” more smoothly (with assistance). The surgeon broke both his feet in multiple places to put cadaver bone in all those places, then added some posts and screws.   Johnny is so brave – we are amazed at his perseverance and thankfulness in the midst of all this.  We could all learn something from him.

As they waited for the surgery Dw said John told him that he had not slept well, he was thinking a lot.  He continued, “I was picturing myself meeting Jesus and he was asking me what I had done with my life and if I had done all I was supposed to.” Their conversation was very insightful and he made himself very vulnerable.  Deep stuff for a 17-year-old who lived in an orphanage for the first (almost) 14 years of his life.

Dw said as they waited for hours he would say to people coming and going, “Hey, have a really Happy Thanksgiving.”  Dw said it made me people pause to really see this broken-bodied young man with the indelible smile sitting facing a very challenging surgery…while waiting in his wheelchair waiting his turn.  Just imagine how many Johnny-boys there are waiting for just one thing – a family.

The surgery was scheduled for 11, they had been waiting since 8 when they came up to see Ruby and then he didn’t actually get to the surgery until 2.  Yet he smiled and wished people well.  He’s an incredible young man.

I have attached pictures of it all from the surgeon.   My blog platform will not allow me to turn the pictures, so hopefully you are looking from a phone to easily turn and see his feet.   No doubt yukky, painful stuff any way you look at it. 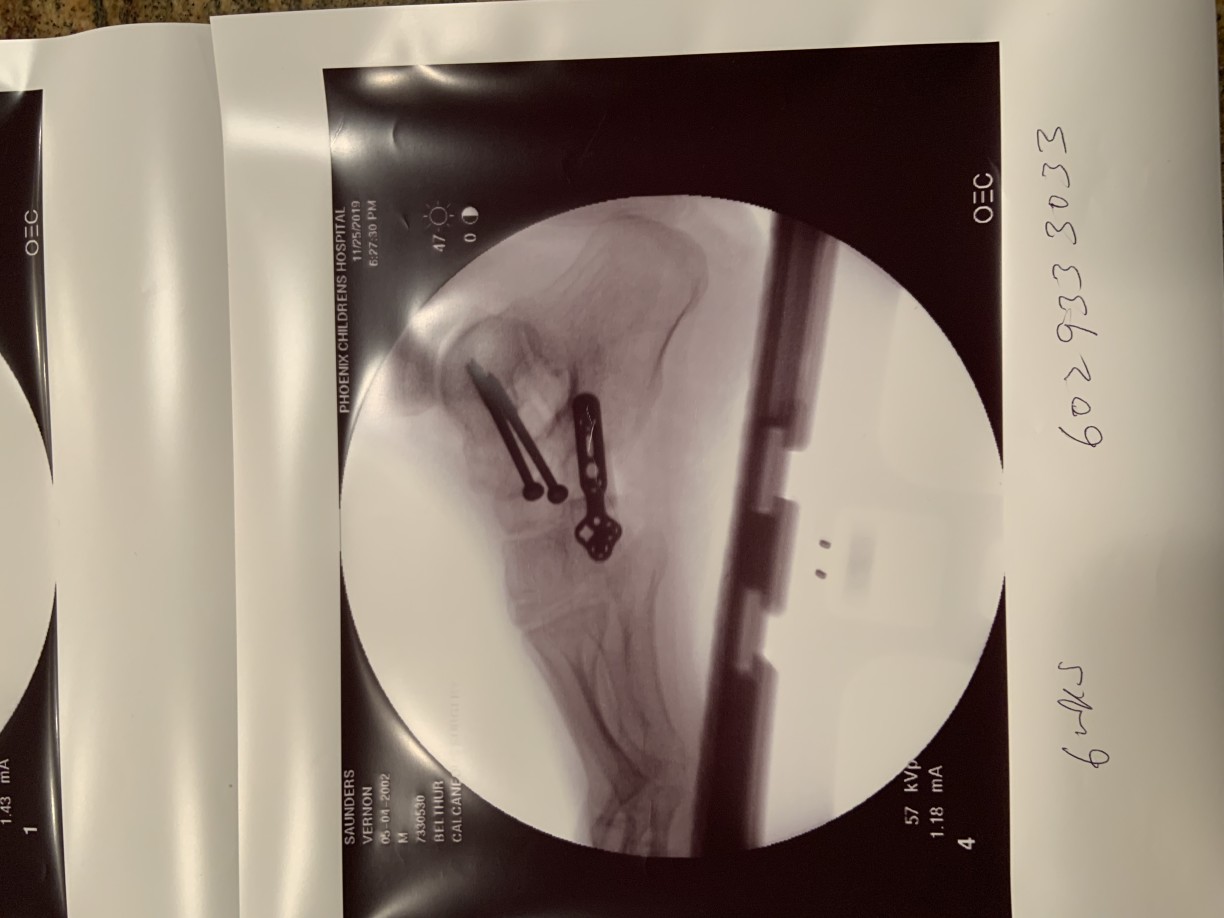 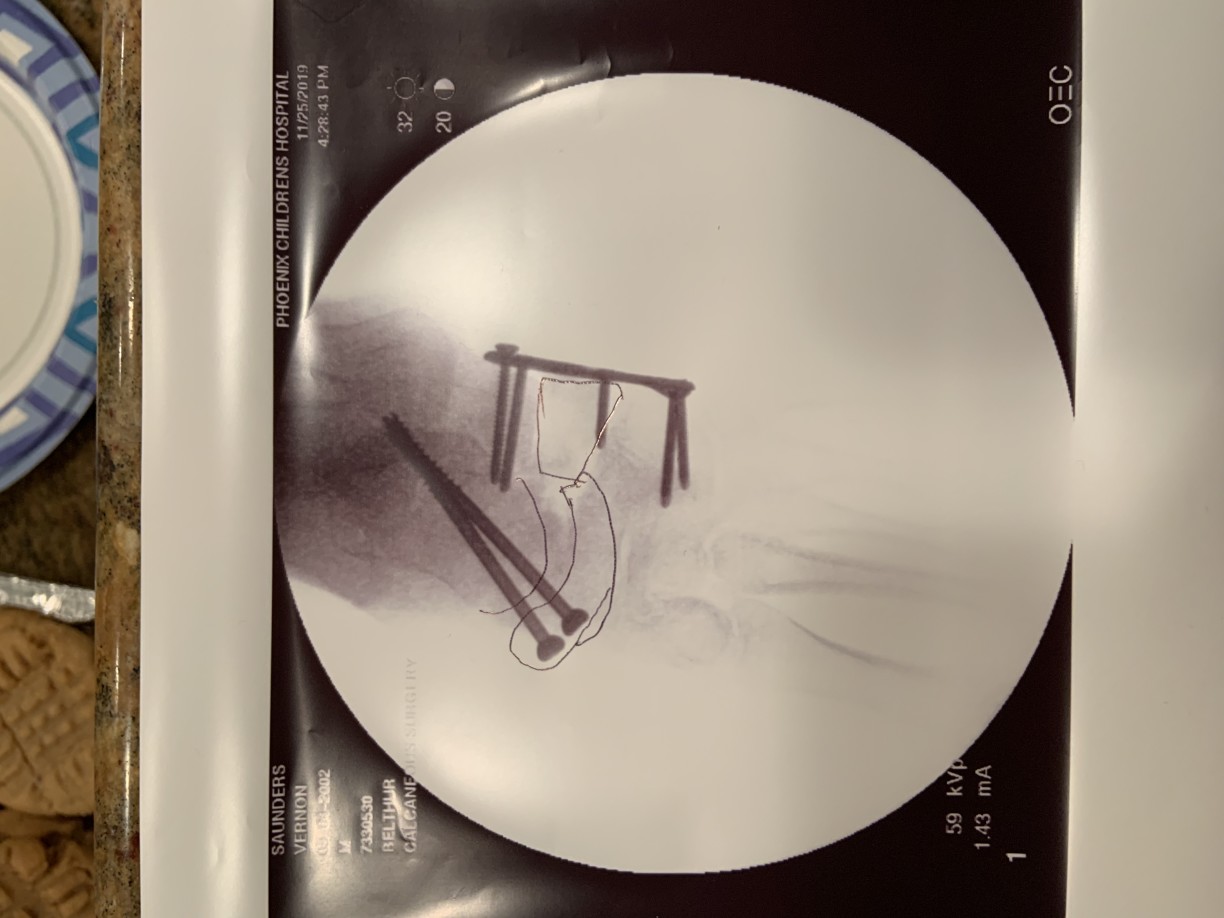 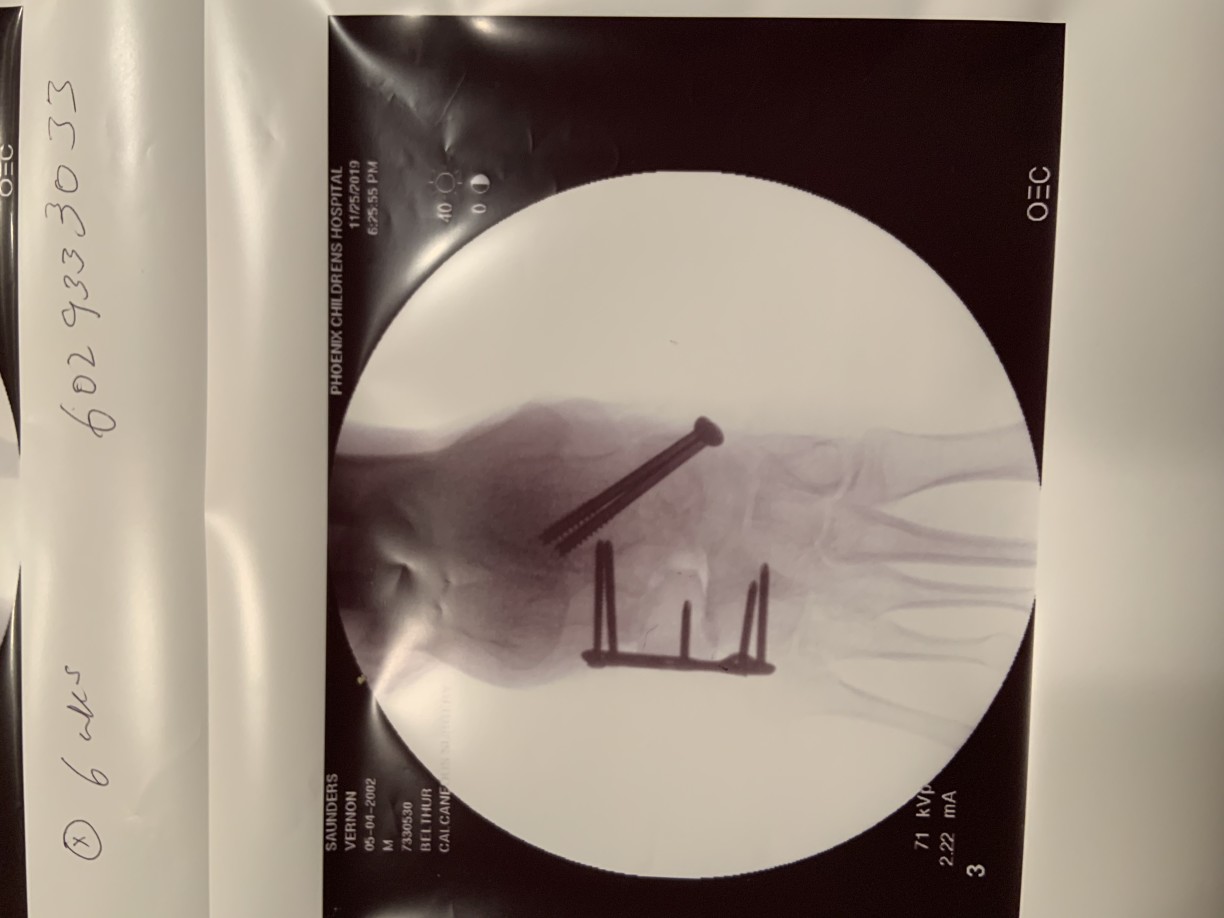 So it is no surprise that he’s in a boatload of pain.  Yes, they have him on all kinds of pain killers but from looking at the pictures, I have no problem knowing that he must be in agony even with pain killers!  He is not allowed to lower his legs at all….meaning he must have his legs straight out for six weeks.   Then intense therapy.

The surgeon wants to “finish” the surgery in March or April…which means he wants to break the hips in multiple places, put cadaver in those same places and also shorten his femur (not sure if he will have screws and pegs inserted then as well).  Our understanding is that this will also mean no mobility whatsoever for six more weeks.   He’s got a long road ahead.  But finally, it’s his turn.

And an itty-bitty on Ruby…. 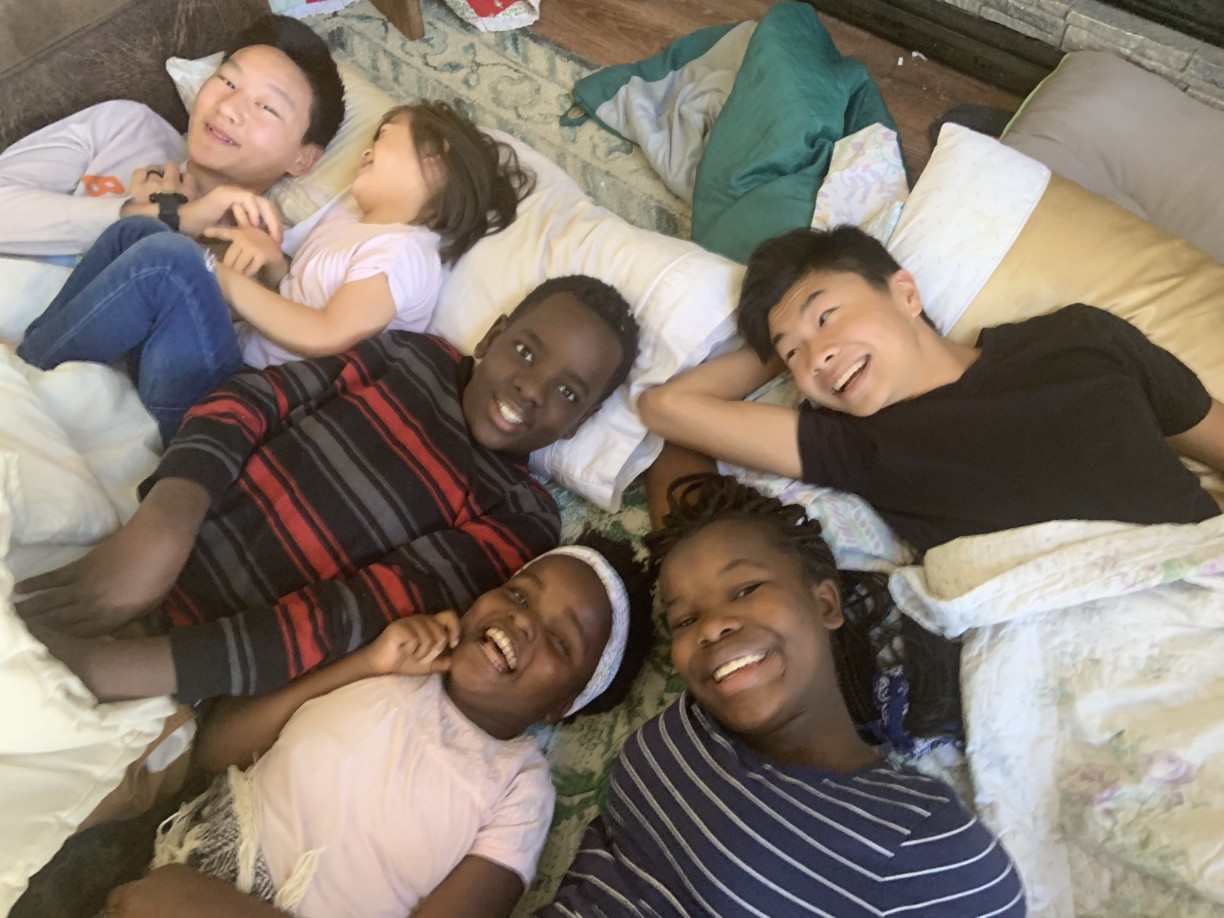 For awhile this morning I had Ruby on the floor to stretch….without summoning anyone…our miracle baby-girl, Miss Ruby, was quickly surrounded by her adoring sibs.  They seriously would do anything for her and her smile says it all  – she knows it!  And well, actually so do theirs.  She’s home. 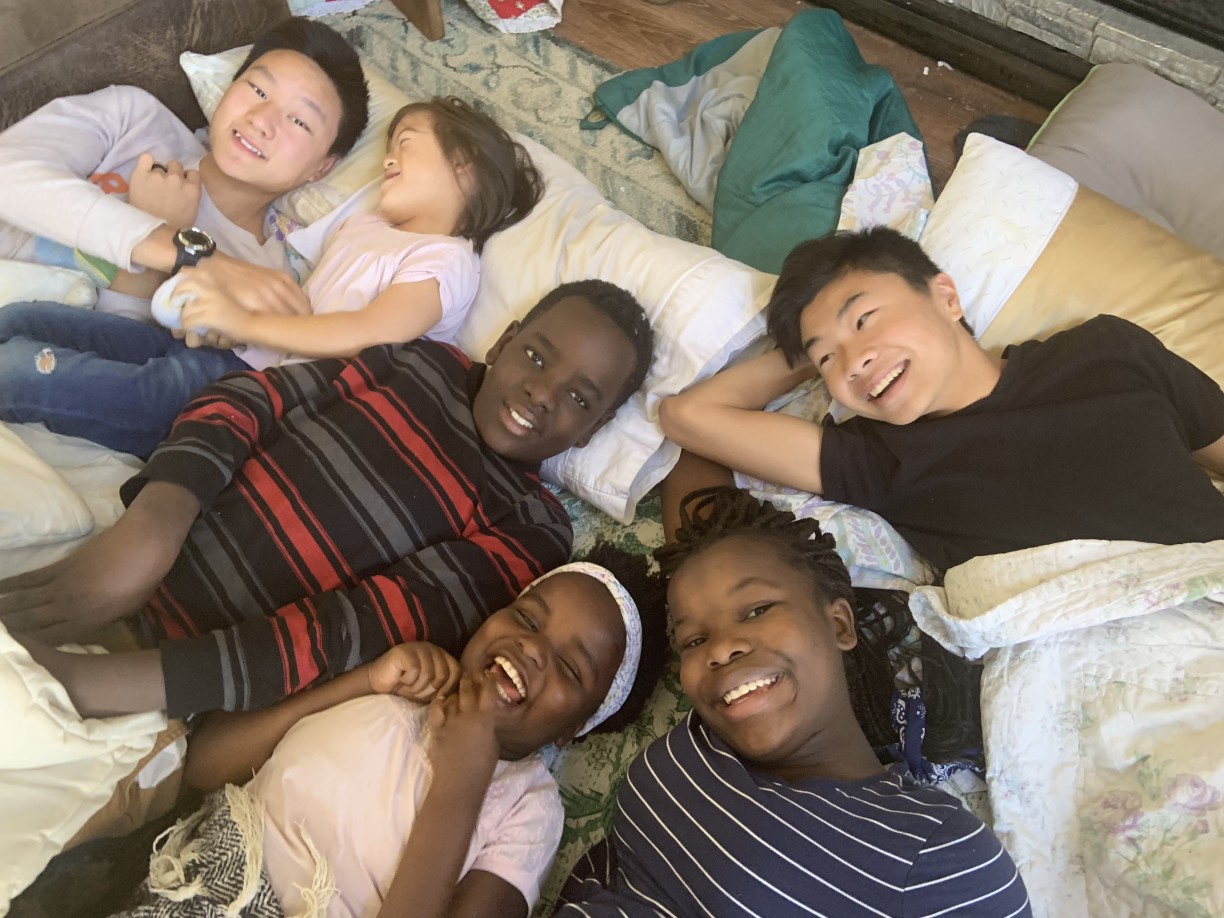